Goodness gracious, the language is changing! U of T linguists study 'g-word' usage in Ontario 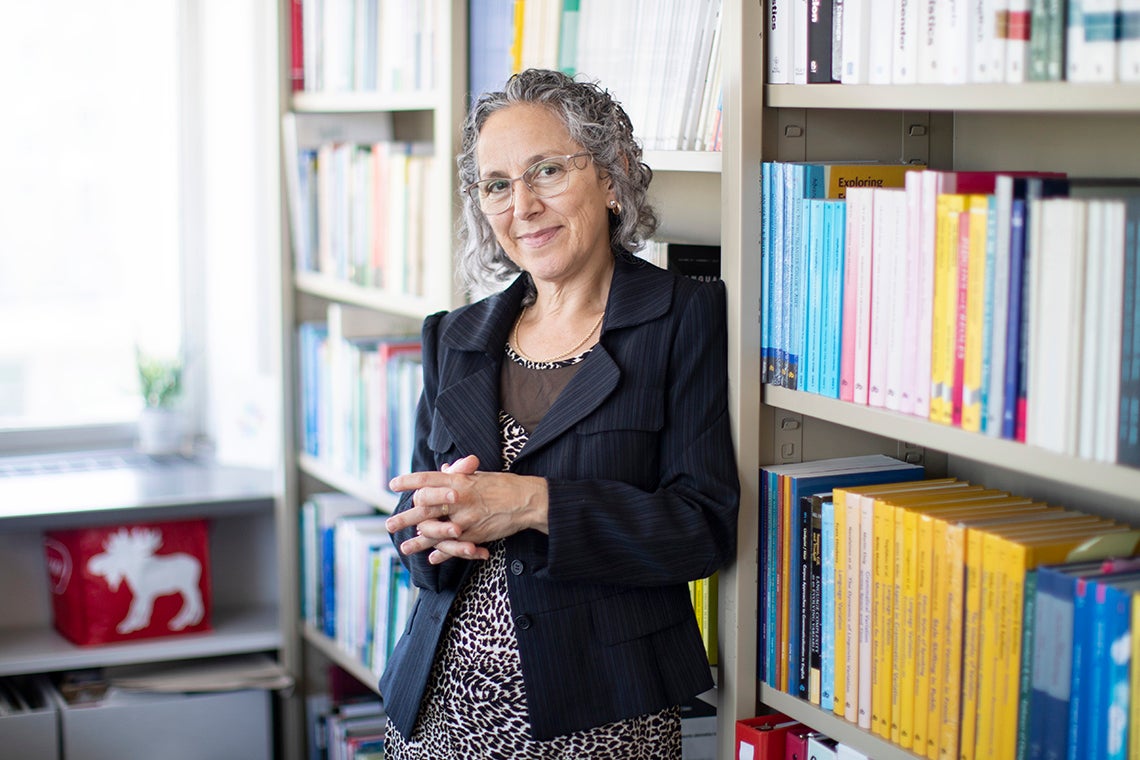 Professor Sali Tagliamonte, the chair of U of T's linguistics department, and her colleague Bridget Jankowski say we’ve generally become more comfortable with the word “God,” but it depends where you live (photo by Nick Iwanyshyn)

As expressions go, “gosh” seems tame enough. But when Sali Tagliamonte was a teenager in summer camp, uttering even a more polite version of the word “God” landed her in trouble.

These days, though, “Oh my God” has become so common that even a linguist like her rarely notices it – that is, until she began canvassing Ontario to document the dialects in 13 different communities, from tiny Lakefield to the city of Toronto.

Instead of hearing the word “God,” in rural areas, the University of Toronto professor and linguistics department chair noticed people using euphemisms that might sound quaint in the city.

“You hear things like ‘Jesus Murphy’ or ‘Holy smokes,’” Tagliamonte says. “I got this idea: Let’s do an inventory of the nature of these words.”

Tagliamonte and post-doctoral researcher Bridget Jankowski interviewed hundreds of people of different ages across the province. Their paper, published in the latest issue of American Speech, says, “G-words have undergone a remarkable shift across the twentieth century.”

Whereas it was long taboo to say the g-word, it is now supplanting euphemisms such as “golly” and “gosh” in Ontario.

But there are differences based on location, gender and age, the researchers say.

Although usage of “Oh my God” is rising in all regions, milder substitutes are still used in smaller communities. Torontonians are the most likely to take the Almighty’s name in vain, with frequency of use decreasing the farther you get from the city. In northern Ontario, the evolution of g-words more closely mirrors Toronto, while in south central Ontario the use of “Oh my God” is stable.

To get a sense of how language is evolving, Tagliamonte and Jankowski studied more than 560 people born before 1999. Interviews were kept informal to mimic natural conversation.

Among older people, euphemisms are more common. For example, the study cites a 91 year-old from Kirkland Lake, Ont., identified as KE, who said, “Well oh cripes, everybody remembered her.”

The researchers also noted differences between men and women. “It doesn’t really matter where you go in the world,” Tagliamonte says, “There are so many differences in language that have to do with men and women.” When it comes to g-words, women were more likely to say “Oh my God” or other variations. They were also more likely to say “gosh” and “goodness,” while men preferred “jeez.”

People have been taking the Lord’s name in vain to express strong feelings for centuries, Tagliamonte and Jankowski write. The Oxford English Dictionary records the year 1340 as the earliest citation of “God” used as an exclamatory oath to “express strong feeling esp. astonishment or dismay.”

In some places, saying the g-word wasn’t just offensive – it was a crime. Scotland passed anti-swearing laws in the 16th century, making it illegal to curse at God or an offender’s parents punishable by fines at minimum. Similar legislation was passed in England 50 years later, Tagliamonte and Jankowski write, “and owners of public houses were expected to arrest patrons who swore.”

The researchers say things began to change after the First World War as interest grew in North American English and colloquialisms, and in the swinging ’60s.

Yet, even today, many still frown upon people who invoke the Creator lightly, Tagliamonte notes. On a trip to Utah to give a talk on the “the new quotative ‘like’” – as in, “She was like, ‘Pass me the ketchup’” – Tagliamonte deliberately left out examples with the g-word to avoid causing offence.

But around Toronto, the G-word is so common, especially among the younger generation, that it is no longer likely to raise eyebrows.

“You just have to eavesdrop on the TTC and you hear it quite a bit,” Tagliamonte says.

She and her co-author argue many aspects of the g-word still deserve attention. For example, the first recorded use of “OMG,” which is attributed to a 1917 letter to Winston Churchill, merits more study, Tagliamonte and Jankowski say. So do g-words in dialects outside Ontario.

Tagliamonte doesn’t know how swear words will evolve as the language continues to change. “It’s very hard to predict what will come next,” she says, “but I will be watching for it.”