Vivian Kang, a second-year engineering student, solders an electronic circuit board as part of a course that has students design and build hardware components (photo by Sean Hum)

As a kid, the University of Toronto’s Sean Hum loved taking electronic devices apart to see how they worked – a hobby that soon led to him building his own electronic circuits.

Now a professor in the Edward S. Rogers Sr. department of electrical and computer engineering in the Faculty of Applied Science & Engineering, Hum recently launched a new course that aims to give second-year students a similar experience.

“When you walk into our space, it looks almost like a machine shop: prototyping equipment, 3D printers, power tools strewn about,” says Hum, adding that the lab features brand-new test instrumentation, soldering and surface-mount rework stations, a reflow oven, and cabinet after cabinet of electronic components.

“For some people, it’s like being let loose in a candy store.”

The course, titled ECE 295: Hardware Design and Communication, made its debut in January. Hum originally conceived the idea two years ago to introduce students to milestone-driven hardware design – what he calls the “nuts and bolts” of electrical and computer engineering – early in their academic careers.

“They are involved from the conceptual and computer-aided design right down to the mounting of components on the circuit boards, as well as using a variety of modern test and measurement equipment and debugging their designs,” he says. “That end-to-end experience isn’t available at other universities – not at the second-year level.”

Hum adds that the teams design complementary modules that must work together in the end, which is “a unique aspect of this course that teaches students about system integration.”

This pedagogical structure reflects the course’s focus on context to strengthen the electrical engineering fundamentals that students gained through their first four U of T semesters. Acquiring sophisticated physical techniques while working towards a user-centred product quickly solidifies those concepts.

“As human beings, our minds are wired to get satisfaction doing something physical with our hands,” says Hum. “I believe it’s one of the reasons for the rise of DIY or ’maker culture’ in society. People just love building things.” 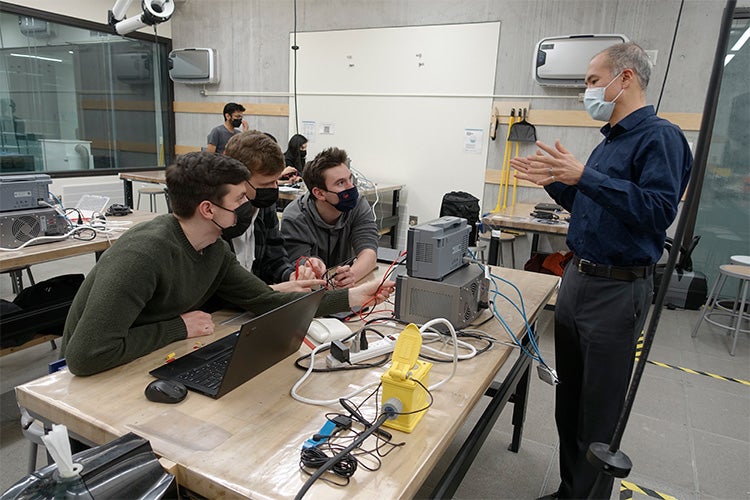 Engineering students (from left to right) Adam McDonald, Damian Pacynko and Andrew Moser listen to Professor Sean Hum as the team learns how to automate the use of test and measurement equipment to make a data logger (photo: Lihin Karunadhipathi Weera)

The course is held in the Myhal Fabrication Facility, which is colloquially known as the “Myhal Maker Space.” The state-of-the-art workshop is open 12 hours a day, five days a week to any student who passes the necessary safety training, enabling them to turn ideas into prototypes when inspiration strikes. The new course, along with the high-end equipment and components to support it, is made possible in part by the Dean’s Strategic Fund.

Professor Deepa Kundur, chair of the electrical and computer engineering department, says she is pleased at how ECE 295 amplifies the core curriculum in balance with the existing second-year software design course.

“Experiential learning emboldens students to pursue hardware projects in future courses, such as our fourth-year Capstone course,” she says. “Ultimately, the department needs to be responsive to trends in the profession, and we’re hearing from our industry partners that there’s great demand for this skill set.”

Hum also sees the course as a complement to software design. While new apps often garner media attention, the industry needs engineers who are conversant in both the hardware and software, which are virtually inseparable in today’s appliances and products. For example, while cars and washing machines once belonged exclusively to the world of hardware, today they contain a level of software integration that would come as a surprise to most people. Conversely, many features of today’s mobile apps are only made possible by the hardware packed onto the smartphone’s motherboard, including nearly a dozen types of antennas.

“You have voice service and data service, you have positioning service through GNSS, you have Wi-Fi, Bluetooth, near-field communications,” says Hum. “All of those require different radios. That’s why companies such as Apple are hiring so many antenna engineers.”

Hum’s own career path in electrical engineering owes much to his early obsession.

He started tinkering with electronic devices in elementary school and by high school he was designing radio circuits – with one eye on the stars.

“I was fascinated by space technology, and have special memories of Sojourner, the first Mars rover mission in 1997,” he says. “It was amazing to me how we could pick up such weak signals from this tiny rover moving around so far away.”

These days, his research group develops antenna solutions based on advanced electromagnetic surfaces in collaboration with aerospace firms. His experimentally focused research mirrors the same hands-on approach he takes with ECE 295 and the graduate students in his group learn about building actual flight hardware in the lab.

“We’re in a golden age for makers, which is good news for electrical engineers,” says Hum. “When the naturally curious are given the proper resources and guidance, the sky’s the limit.”