Gloria Epstein, who paved the way for marriage equality as a judge, receives honorary degree

From humble beginnings, Gloria Epstein has forged a distinguished legal career – as a litigator and a judge – that has helped blaze a trail for other women in the profession.

As a judge, Epstein earned respect from those who appeared in her court – not only for her thorough knowledge of the law, but for her attention to the human dimensions of the cases that came before her.

Her most consequential decision paved the way for marriage equality in Canada.

Today, for her transformative impact on the law and society, and her outstanding service to the university as a mentor and volunteer, Epstein is being awarded a Doctor of Laws, honoris causa, from the University of Toronto.

In an interview with U of T Law’s Nexus magazine in 2015, Epstein describes her family as impoverished, noting that her mother had a Grade 3 education and her father died when she was a teenager. One of the results of her upbringing, she says, was a “profound interest” in people from all walks of life.

She left home for Queen’s University with one book besides her schoolbooks – the bible. She earned a business degree and then figured ‘I better have a business.’ She bought a fishing camp in northern Ontario, where, as she told Nexus, she “cooked on the cook’s day off, bartended on the bartender’s day off, did the laundry, cleaned the rooms…” and before long concluded that running a fishing camp was not for her. At the suggestion of her brother-in-law, she decided to write the LSAT. “I guess you could say I ended up in law school more by happenstance than by design,” she said.

Epstein supported herself through first year at U of T’s Faculty of Law by waitressing and checking coats several nights a week, got married in second year and gave birth to her first child in third year. “My time at law school was challenging,” she told Nexus. “But I would not change any of it. It was exciting. And law school, together with the fishing camp experience, made me strong, very strong.”

After graduating in 1977, she practised litigation at two large Toronto firms and then opened Gloria Epstein & Associates, one of Toronto’s first female-owned litigation firms, in the mid-1980s. Less than a decade later, she was named an Ontario Superior Court justice – a job she described as “a gift. 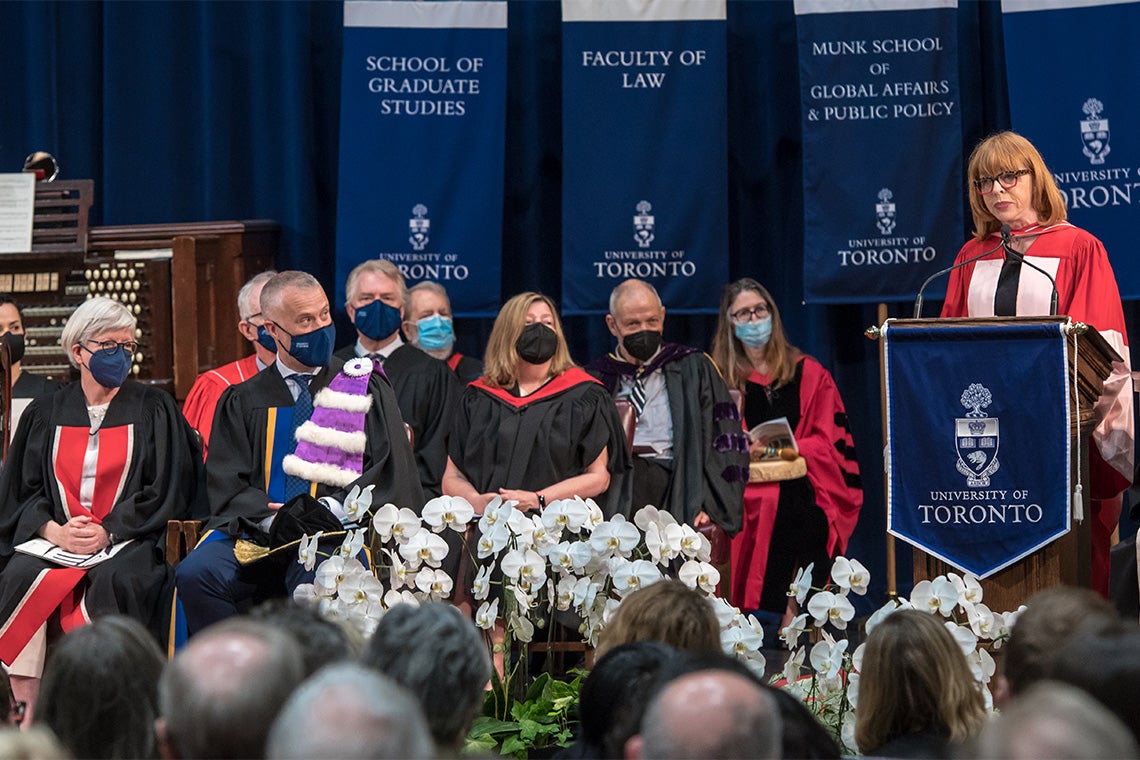 Her most notable judgment was in the case of M v. H, which related to the breakup of a long-term relationship between two women. M was suing H for spousal support, but at the time Ontario law defined a common-law relationship as heterosexual. Epstein ruled the law unconstitutional because it discriminated against same-sex couples. Her decision made front-page headlines, eventually led to full marriage equality under Canadian law and is recognized as a critical moment in the history of the LGBTQ2S rights.

“I am enormously proud of the part I played in that case, in that particular development of Canadian law,” Epstein told Nexus. “Canada really has led the way in treating people of all types of sexual orientation equally, giving them the dignity and respect they deserve.”

Epstein was appointed to the Ontario Court of Appeal in 2007, where she served for 11 years. Of her law clerks at the court, she asked that they never lose sight of the people behind the legal documents. “It’s not about where the comma is and how to interpret the word,” she said in an interview with the Toronto Star. “It’s about the people, and their lives, and they are relying on us to help them with their problems.”

In her planned convocation remarks, Epstein encouraged graduates to identify a sense of purpose for what they do early in their career and, periodically, as they advance, to stand back and consider the bigger picture. She illustrated her point with the parable of the three bricklayers: “Someone walks by and asks what they’re doing, and the first says ‘earning five bucks an hour,’ the next says, ‘I’m putting bricks on top of bricks to build a wall,’ and the third says, ‘I’m contributing to the development of a beautiful edifice.’ They all were doing exactly the same thing but the third had identified a real sense of purpose. It’s a matter of perspective: as a lawyer, are you just earning money, are you drafting a document, or are you helping someone?”

Having presided over hundreds of cases, Epstein retired from the bench in 2018 to assume leadership of the Independent Civilian Review into Missing Person Investigations, commissioned in the wake of a flawed investigation into the disappearance of several gay men in downtown Toronto. The review’s final report provided 151 recommendations to improve the relationship between the Toronto Police Service and LGBTQ2S community. Today, she continues to work as a mediator and arbitrator in Toronto.

Over the years, Epstein has volunteered with U of T’s Faculty of Law in several roles – as president of its alumni association, as justice-in-residence, as an alumni mentor and as a board member of the campaign to raise funds for the construction of the Jackman Law Building. She also serves on the boards of several other educational and health organizations, and lectures frequently on supporting women lawyers.

She received a U of T Arbor Award in recognition of her contributions to the university in 2007, a YWCA Women of Distinction Award in 2013 and an honorary degree from the Law Society of Ontario in 2019.