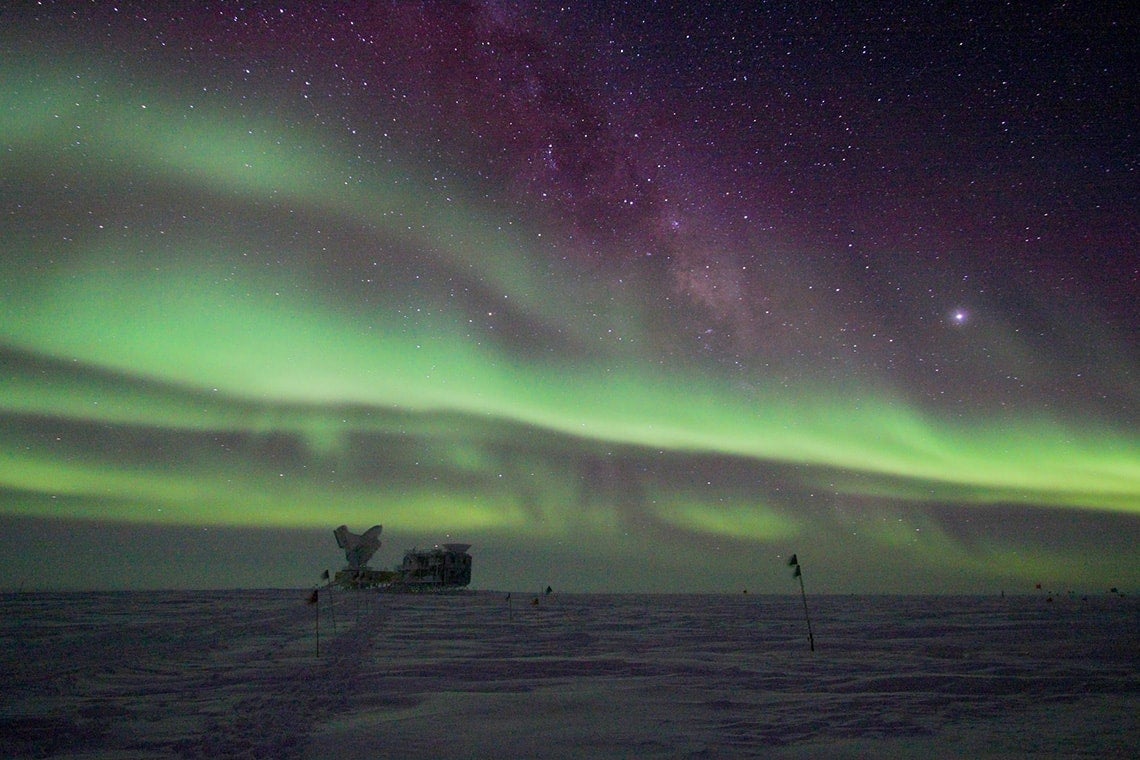 Before Keith Vanderlinde’s first voyage to the South Pole, he was warned to bring a hobby. People can get a little stir crazy after months isolated in the coldest place on Earth. 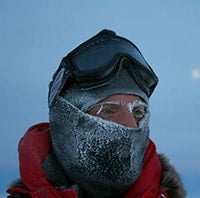 Some researchers take up pool. Others binge on seasons of Seinfeld and other old TV shows from the station’s DVD collection. Vanderlinde, an assistant professor in U of T’s Dunlap Institute for Astronomy & Astrophysics, brought a camera.
“I had never taken pictures before this, really,” says Vanderlinde, who is also in the department of astronomy and astrophysics in the Faculty of Arts & Science. He packed a Canon camera, a few lenses and a tripod. “This was mostly a sanity preservation mechanism.”
He went to Antarctica to operate and maintain a much bigger camera of sorts: the South Pole Telescope. The 10-metre dish maps out the cosmic microwave background, leftover light from the Big Bang that is shedding light on the early universe.
Tyler Natoli, a post-doctoral fellow, and Matthew Young, who works in Vanderlinde's lab, are going to Antarctica in November to help upgrade the telescope. Vanderlinde suggested bringing a camera – if only to get a shot of themselves at the southern tip of the world.
“If you don’t get the South Pole selfie, you’re not doing it right,” he says. 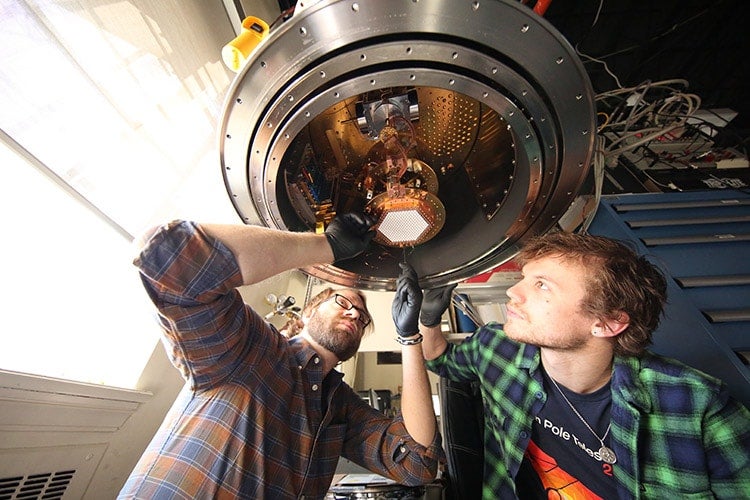 Dunlap fellow Tyler Natoli and PhD student Matthew Young test a South Pole Telescope 3G detector assembly in a cryostat in the Dunlap Institute (photo by Chris Sasaki)
The photos Vanderlinde snapped over one winter in 2008 look like they were made on the surface of a planet from Star Wars. But most were taken on his one-kilometre walk between the telescope where he worked and the South Pole station where he and other researchers lived. 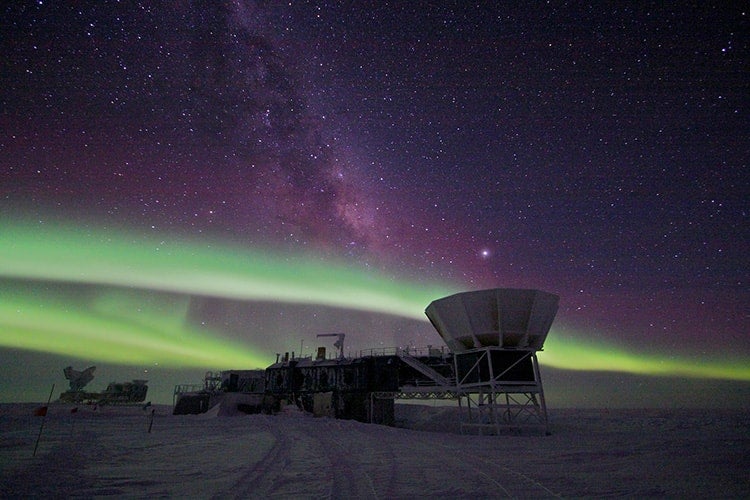 The walk to work can be “slightly harrowing,” he says, since it’s bitterly cold and pitch black most winter days. But sometimes the auroras create a spectacular light show.

“You’re stumbling through the cold and the ice and your head is buried in layers and layers of jacket and hat and scarf, but every now and then you just have to stop and look up.”

The South Pole Telescope is visible in the far left. 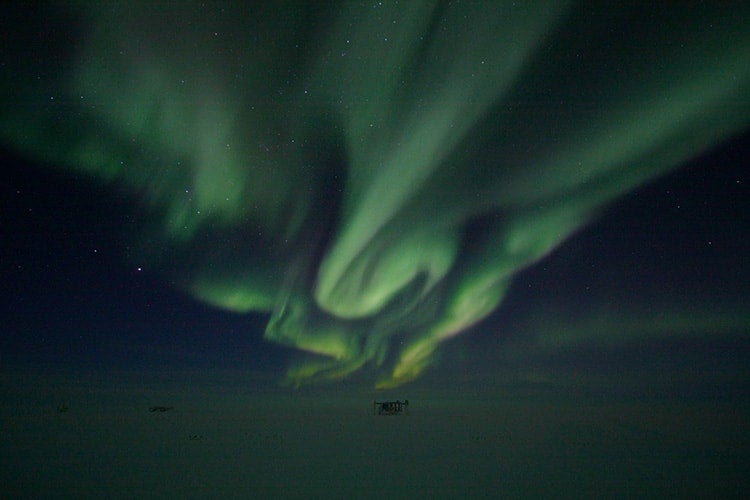 Taking this photo of aurora trails, or of anything else outdoors for that matter, was a challenge.

Using a camera while wearing five pairs of gloves isn’t easy. He attached his outer gloves to a string running through his sleeves so he could take them on and off more easily. Even that delayed frostbite by a few seconds.

Because of the extreme cold, his camera batteries lasted only 30 seconds – usually just enough time to make a single long exposure. 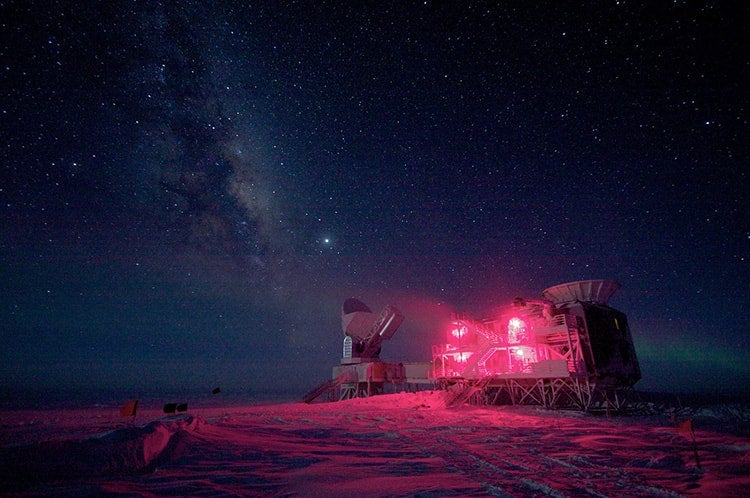 What’s with the red light? Some scientists are studying the auroras, and lights of any colour other than this specific shade of red can skew their data. “I took this picture because the red light just made everything else look so blue,” Vanderlinde says. 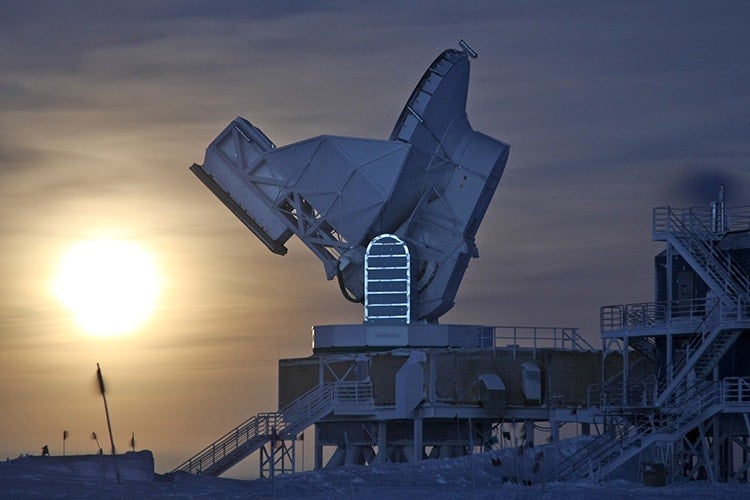 Don’t be fooled: That isn’t a sunrise in the distance. It’s the moon. Over the long winter, the moon shines so brightly it almost looks like the sun.

“I was wrapping my head around it getting dark and suddenly that thing came up,” Vanderlinde says. “You do start thinking of it as the sun – to the point that I started asking people silly questions like, is the sun up today?” 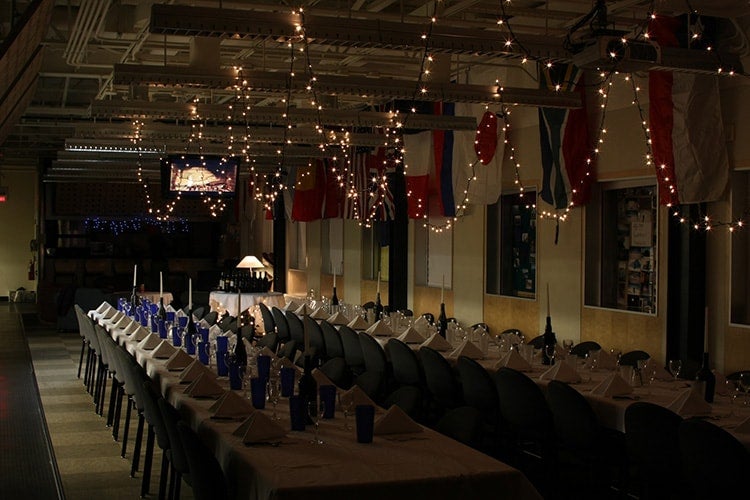 The scientists and galley staff who spend the whole season at the South Pole, a.k.a. “winter-over Polies,” hold a midwinter feast on June 21. “It’s a really lovely chance to just get together. It feels like a Christmas or New Year’s family reunion,” Vanderlinde says. (Yes, that's the fireplace channel on the elevated TV.) Traditionally, they celebrate with a screening of The Shining, about a writer (Jack Nicholson) who loses his mind after taking a caretaking job at an isolated moutain hotel. “At that point everyone can really identify with it,” says Vanderlinde. 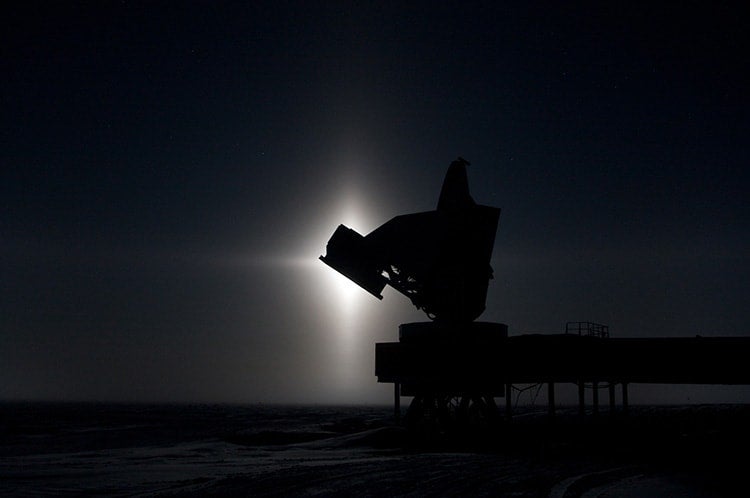 “It was just surreal,” he recalls. “One day I walked outside and there was this giant glowing cross in the sky.” 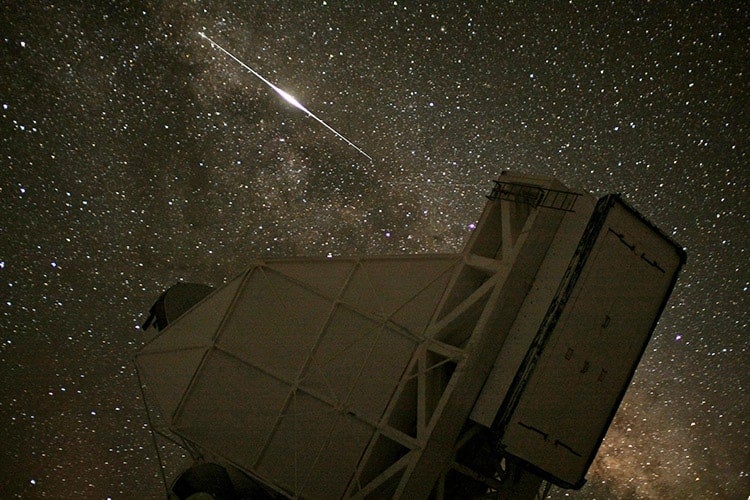 What appears to be a shooting star is actually the sun’s rays reflecting off a satellite that provides global cellular coverage. The orbiting Iridium satellites are known to produce some of the brightest satellite flares.

“When I say they’re incredibly bright, I mean they can get almost to the level of the full moon,” Vanderlinde says. 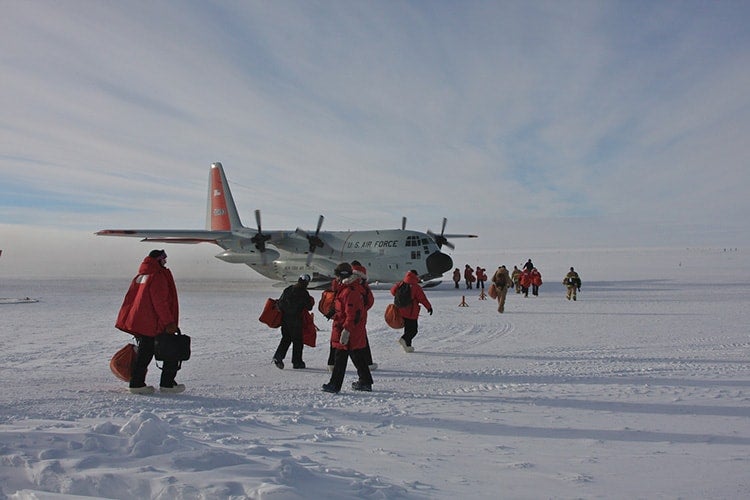 The climate is so treacherous at the South Pole that it's only safe to fly in or out, between November and February, when it’s warmer and there’s greater visibility.

By the end of their stay in Antarctica, those who lived there all winter are so pale, their skin is “transparent,” Vanderlinde says. In comparison, new faces look “orange.”

“They’re tremendously grumpy,” he says. “It’s fairly well known that you don’t talk to a winter-over Polie when you show up new.”