Free trade with Europe is not dead, but it’s in a coma, says U of T political scientist 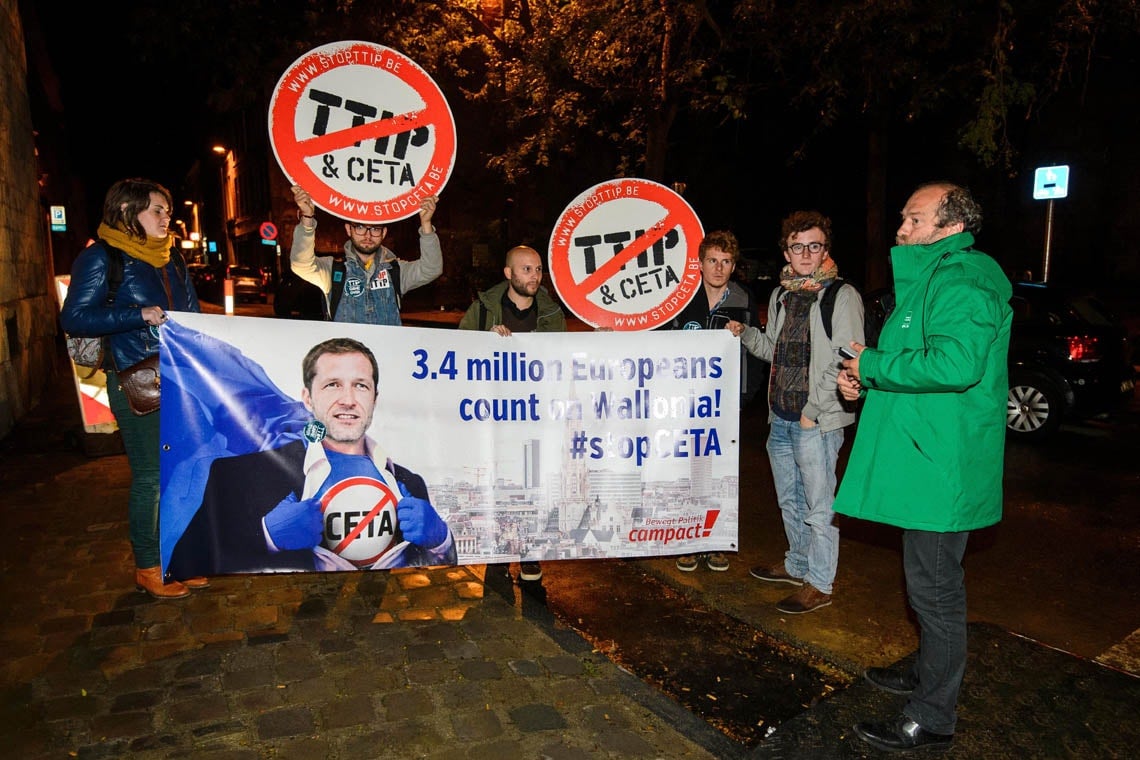 European and Canadian politicians and diplomats are scrambling this week to salvage a trade agreement that was supposed to be signed Thursday, but which is now in doubt because of the objections of Wallonia, a francophone region in Belgium.

If ratified by Canada and the European Union, the Comprehensive Economic and Trade Agreement (CETA) would open up markets and drop nearly all import taxes on everything from food to cars to metal and forestry products.

U of T News spoke to Stefan Renckens, an assistant professor of political science at U of T Scarborough, about the collapse of the trade agreement. Renckens has a master’s degree from the University of Leuven in Belgium and worked there as a research and teaching assistant at the Institute for International and European Policy and as a research fellow of the Flemish Research Foundation before moving to North America. Why is Wallonia balking at CETA?

There are substantial objections and political motivations. Substantially, one of the contentious issues is the so-called Investor-State Dispute Settlement mechanism, whereby foreign companies can sue governments. Even though a modified, more modest version has now been introduced in CETA, compared to the original draft and to other existing trade treaties, there is still a fear that this gives too much power to foreign companies and will lead to governments self-censuring out of fear of being sued by a company. In addition, there is fear – justified or not – that CETA can over time lead to a lowering of social, environmental and food safety rules, and that the elimination of trade barriers will lead to a loss of jobs in the agricultural and industrial sectors.

Considering the specific situation in Belgium, political motivations play a role as well. Over the last few months, there has been increased attention to several of these trade agreements, in particular the Transatlantic Trade and Investment Partnership (TTIP), an agreement the EU is negotiating with the U.S. The negative perceptions around the TTIP negotiations have spilled over to CETA and have led to significant mobilization by civil society, which culminated in a large demonstration in Brussels in September.

Why does Wallonia have the power to veto the deal?

While the EU has the sole competence to negotiate trade agreements, the European Commission decided to label CETA as a “mixed agreement” instead of an “EU-only” agreement, indicating that both EU and member state competences were being touched upon in the agreement. As a result, 38 national and regional parliaments need to vote on CETA. This would in essence not be a problem if Belgium was a normal federal country. However, unlike other federal systems, there's no hierarchy of rules in Belgium, meaning that a decision by a regional parliament cannot be overruled at the federal level. And hence Wallonia has veto power.

Not quite yet. The last few days, there were attempts to overcome the objections of Wallonia, especially around the dispute settlement mechanism, but they officially failed on Friday when Freeland left the negotiations. While the official deadline for an agreement was set for Friday, the unofficial one is Monday, by which time Canada would decide whether or not to cancel Justin Trudeau’s trip to the signing ceremony. Sources inside the European Commission have indicated that they will continue talking to the Wallonia government to see whether an agreement can be reached. So maybe over the weekend, we could see white smoke, but I doubt it.

Wallonia had hoped that they would get more time to negotiate. Their argument was that they notified the European Commission of their concerns already a year ago, and that not much was done to alleviate them. A few more weeks or months of negotiations shouldn’t be an issue, they argue, especially since just over the last few days several concessions have been made, which shows there is still room for negotiations. From the other side, EU officials and politicians from member states are saying that it is irresponsible to veto the agreement at such a late stage (negotiations started in 2009) and after all the other parliaments have agreed to sign. They argue that reopening the negotiations is not that easy, since it will undoubtedly put issues back on the table that negotiators thought were agreed upon. Over the last few days, the parties have only worked at improving an interpretative document that clarifies the agreement, instead of changing the agreement itself. But maybe the only way to alleviate Wallonia’s concern is to open up the agreement itself, which may be opening Pandora’s box.

Several Belgian politicians – especially of the Flemish Liberal Party Open-VLD – have suggested that the Belgian federal minister of foreign affairs should ignore Wallonia's “no” and vote in the Council of Ministers to sign the treaty anyway. This would, however, be unconstitutional and not hold up in the Belgian Constitutional Court. The Belgian minister of foreign affairs has said he will not do this. And without his yes vote, there is no agreement.

If no agreement is reached over the weekend, it looks like CETA will be at least in a coma for the near future. I believe they will try to resuscitate it at some later stage, since I don’t think they want to throw away seven years of hard work. But for now, it doesn’t look good, not just for CETA but also and especially for TTIP.

How important is CETA for Europe? For Canada?

Proponents say it will lead to economic growth and job creation.  Opponents both in the EU and in Canada are saying that the gains will be modest at most. It is extremely hard to predict these potential gains, and each side has their own reports to back up their claims. Equally important as its pure economic impact is its political importance. Not signing the treaty would be a political setback for the EU, since it will be seen as an unreliable partner.  EU officials are now saying that if we can’t even conclude a trade treaty with a close ally like Canada that shares many of our own values, with whom can we then credibly conclude a trade treaty? Even if it is signed in the end, it will certainly lead to a discussion on the way trade deals are negotiated by the EU and the voting procedure that is causing this crisis now.

There certainly is broader disagreement and concern in Europe about globalization in general, not just trade liberalization. This backlash follows in the wake of the Great Recession, austerity politics, and the emergence and popularity of populist parties. There were and still are concerns about CETA in countries such as Germany, France and Eastern European countries, even though none of them have formally blocked the process like Wallonia now has. The secrecy of the negotiations has also been used by opponents to argue that deals are being made against the interests of the people.