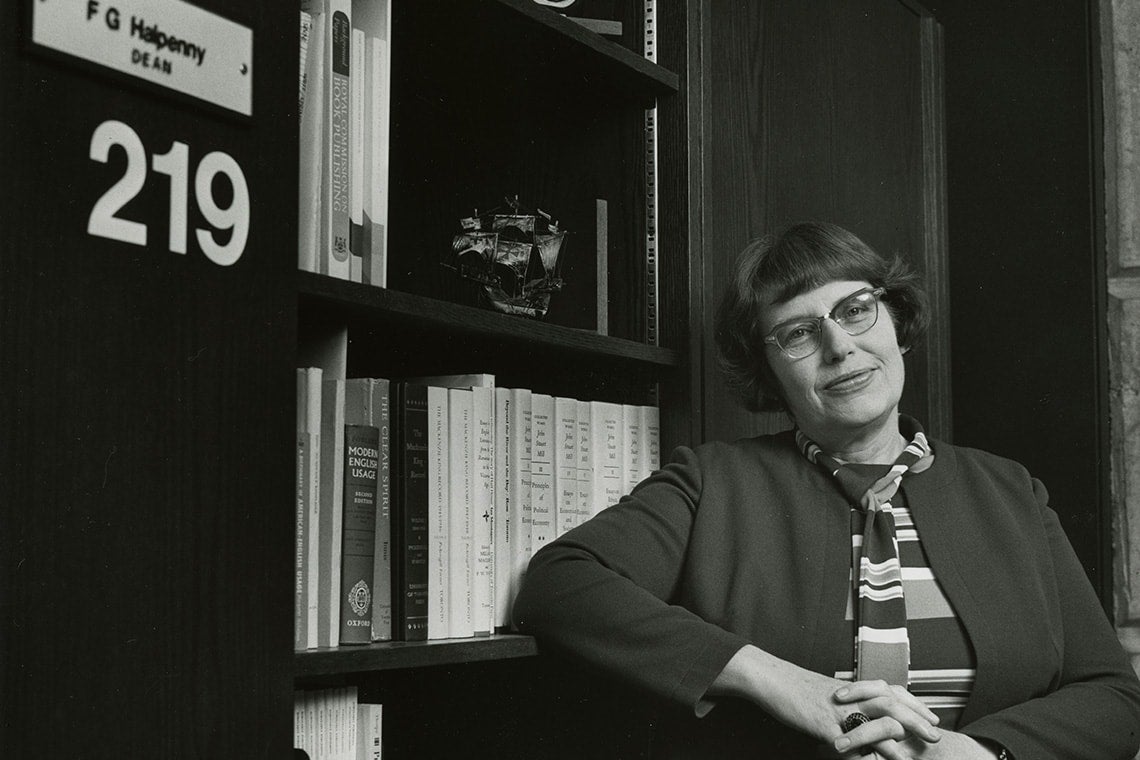 Francess Halpenny in her office, December 1972 (photo by Robert Lansdale, courtesy of University of Toronto Archives)

Francess Georgina Halpenny played a key role in the post-war expansion of Canada’s book industry, helping to cement the University of Toronto’s position as a centre of academic publishing.

Halpenny, who died in December at the age of 98, was a long-time senior editor at U of T Press, dean of the Faculty of Library Science (now the Faculty of Information) for six years in the mid-1970s, and she spent 20 years as the editorial force behind the Dictionary of Canadian Biography. In those roles she was a mentor and role model for women in academia and publishing. But she was also gracious, approachable, and eschewed the limelight.

Outside of her work, Halpenny was a devotee of music and the theatre – having written, directed and performed in plays in her early years. She remained deeply interested in the arts and public affairs until her death on Christmas Day.

At U of T, Halpenny was “an incredible force of nature,” said current dean of the Faculty of Information, Wendy Duff. “She was probably the most pre-eminent dean we ever had.”

When Halpenny became dean, she had lunch with every student in the faculty – usually in small groups – to make sure she got to know each one individually, Duff said. “She touched the lives of every single student.”

Halpenny taught a course on contemporary publishing, and was a “fantastic lecturer,” Duff said. “She had a dramatic presence [and] the ability to hold a whole room.”

At the library school, Halpenny took the helm at a time of great upheaval. In the 1970s the faculty was in the process of implementing computers, moving into a new building, and graduating its first PhD students. Halpenny’s approach, Duff said, was to make sure graduates had the analytical skills to deal with any eventuality in a rapidly changing world.

In parallel with her teaching and administrative position, Halpenny worked as an editor at U of T Press, which she had first joined in 1941, moving into increasingly responsible roles as it expanded rapidly in the 1950s, '60s and '70s. She shepherded into print the work of scholars, many of whom were not easy to work with. Roy MacSkimming, in his history of Canada’s publishing industry The Perilous Trade, said a key part of Halpenny's job was “the care and feeding of academic egos.”

Her “tact, thoroughness and sharp editorial eye,” helped her get the authors on side, he said.

Among the many important works she handled were Marshall McLuhan's The Gutenberg Galaxy, Eric Arthur’s Toronto, No Mean City and Robert MacGregor Dawson and Norman Ward’s seminal work of political history, The Government of Canada.

Ian Montagnes, who was a colleague of Halpenny's at the Press and later became its editor-in-chief, said she built an unparalleled team of highly skilled editors who were able to improve the manuscripts handed to them by academics. “But she believed that the editor's work should be invisible,” he said.

In a 1961 essay about academic publishing, Halpenny outlined her philosophy: “It is one of the oddities of the editorial function that it is most successful when least observed,” she wrote. “It has been well performed when the hovering pencil is least evident in the final result.”

Halpenny’s biggest mark in publishing may have been as the editorial director behind the Dictionary of Canadian Biography, a highly ambitious, bilingual project developed by the U of T Press in association with Laval University’s publishing arm in Quebec City. Its first volume was published in 1966, and Halpenny took over as general editor in 1969, steering its operations until 1988.

The Dictionary of Canadian Biography was a major undertaking at the Press and was an innovative work in Canada, said John Yates, the current president of U of T Press. “A biography of famous Canadians by year of death, in English and French, was not something that had been published previously and was quite ground-breaking,” he said. Halpenny played a “critical part in the project,” which also helped build the reputation of the Press, he said.

Halpenny was so devoted to the project that for many years she maintained an apartment in Quebec City, where she spent about a week each month conferring with her Laval counterparts. Francess Halpenny was born in 1919 in Ottawa, but the family soon moved to Maxville, in eastern Ontario, where her father ran a drug store. When she was about 10, they came to Toronto. Halpenny went to Brown School and Oakwood Collegiate, where she excelled at English but barely scraped through the mathematics requirements. With a scholarship, she enrolled at U of T’s University College, in a newly created English language and literature program.

At UC she particularly enjoyed Barker Fairley’s course on Goethe’s Faust, and became enamoured with 19th century literature. She later said that if she had gone on to do a PhD, it would have focused on Tennyson’s Idylls of the King. Halpenny also developed a love for the theatre while an undergraduate, joining the UC Players’ Guild and performing at Hart House Theatre, as well as writing and directing.

But it was an era of upheaval, and she graduated in 1940 just after France fell to Hitler’s Nazi army. “It was a very anxious and dreadful time,” she said in reminiscences recorded in the last years of her life. All her male colleagues knew they would soon be in uniform.

After spending a year on a master's degree, then working fora little over a year in a junior position at the U of T Press, Halpenny decided to enlist in the Royal Canadian Air Force. “I felt very strongly that everybody’s effort was needed,” she said. After basic training, she was posted to Newfoundland, working in a meteorological office north of St. John’s where she developed weather forecasts to help guide Allied aircraft and warships. Later she served briefly in Summerside, P.E.I.

It was responsible war work, but safe, and Halpenny made friends and developed a taste for travel. “If anybody can be said to have had a good war, I did,” she said years later. “I was not in danger.”

After the war, Halpenny returned to Toronto, and to U of T Press, which was short of staff but about to begin a dramatic expansion. Universities were booming, and U of T President Sidney Smith wanted it to become a force in scholarship – and a prominent publisher of scholarly works. Halpenny, was in the right place at the right time to take a leadership role.

But she also maintained an active life outside the university, was devoted to her elderly mother, and was deeply interested in the arts, said her niece Jane Loughborough.

Halpenny would take her nieces and nephews to the Stratford Festival when they were very young, Loughborough said, and that tradition continued for many years. Halpenny also set up accounts for them at Britnell’s bookstore on Yonge Street in downtown Toronto, so they could pick up books whenever they wanted. She had season subscriptions to the ballet, the opera and the symphony, and was a big donor to cultural charities.

While Halpenny believed in keeping work and private life separate, she did occasionally bring work home, Loughborough said. At the family cottage, she sometimes recruited her nieces and nephews to help with the index of a book. “She would go through the book, identify the things that needed to go into the index and what page it occurred on, and we would write it on an index card,” Loughborough said.

Despite her accomplishments, Halpenny never figured out how to use a computer. “She had no technical skills whatsoever,” her niece said. “Her brain just didn’t work that way.”

Her nephews and nieces were only vaguely aware of Halpenny’s importance in the publishing industry, Loughborough said. “We had a sense of her stature and her interests, but not of the accolades. She was so humble.” Eventually, however, as those accolades began to roll in, it became clear to her family how highly she was regarded. Halpenny received 11 honorary degrees, the Order of Canada, and many other awards.

After retirement, Halpenny continued to write papers related to publishing, and she read voraciously and kept on top of current events. When her eyesight failed in her later years, her family hired two readers to visit her at Sunnybrook veterans’ residence and help her plow though the Globe and Mail, the New Yorker, the Times Literary Supplement, and many books.

Halpenny was a senior fellow at Massey College, and would meet with graduate students there until she was unable to make the trip. Former head of Massey College John Fraser describes Halpenny as a “doughty personage who had a big heart, and was really interested in young people.” When she talked to graduate students, “she made them feel that what they were doing in scholarship was worthwhile and worthy. I never saw a young person talking to her who didn’t leave knowing that they had been in touch with a genuine character and an inspiring person.”

She leaves her brother Arthur, and nieces, nephews and their offspring. A memorial service for Francess Halpenny will be held on March 26 at Northlea United Church in Toronto.