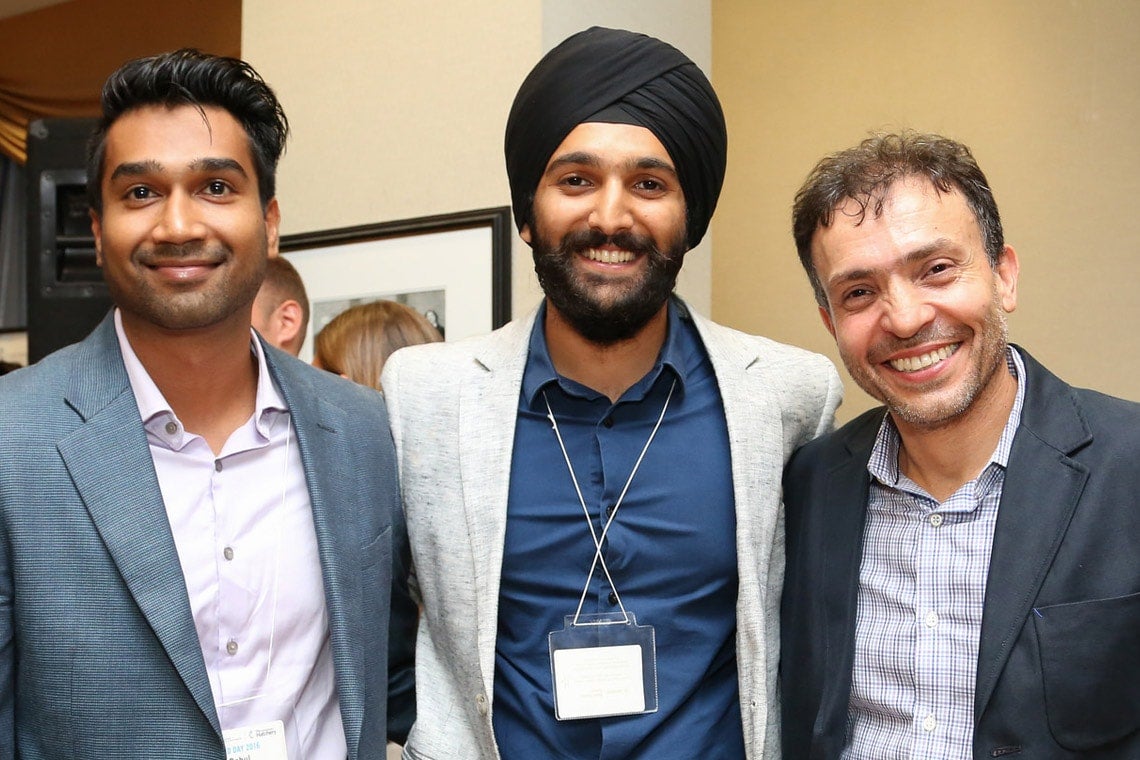 A robotic exoskeleton for children with physical disabilities, an electronic “smart skin” that helps surgeons avoid errors and a meal replacement that promotes cognitive health — these were just a few of the U of T Engineering innovations featured at the 2016 Hatchery Demo Day.

A total of 14 student teams pitched their business ideas to a panel of expert judges as part of the Dragon’s Den-style event, hosted annually by the Entrepreneurship Hatchery, a startup accelerator at U of T Engineering. Competitors were vying for a share of $32,500 in seed funding and the attention of potential investors.

“Thank you to all of the teams for your energy, your passion, and for being hungry,” said Joseph Orozco, executive director of The Entrepreneurship Hatchery in his opening remarks. “You are the future.”

Demo Day is the culmination of the Hatchery’s intensive summer program, where student teams work with experienced mentors to develop their business ideas and competencies, getting guidance on everything from patent applications to building prototypes, which they create using 3D printers and other resources.

The seed funding at stake for the top two prizes is donated by alumnus Anthony Lacavera, founder and chairman of Globalive Holdings and former CEO of WIND Mobile. A third-place prize is provided through funds raised by the students themselves.

“The University of Toronto was recently named the top University in North America for research-based startups, and the presentations we have seen tonight are a testament to that position,” said Cristina Amon, dean of the Faculty of Applied Science & Engineering. “We are very proud to celebrate the creativity, talent and hard work of these emerging entrepreneurs.”

This year’s winners were: 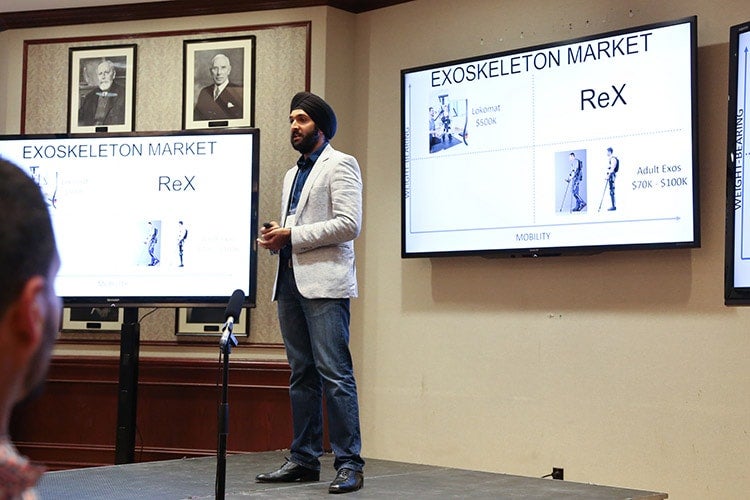 Manmeet Maggu was a mechatronics engineering student at another university when he learned that his nephew had cerebral palsy.

He and his friend Rahul Udasi began investigating ways that robotic exoskeletons could be used in physiotherapy for children with cerebral palsy and other physical disabilities. They learned that although some robotic therapies exist, the exoskeletons typically cost a whopping $500,000, and are found in only a handful of clinics worldwide.

So they set about building a smaller robotic exoskeleton, dubbed Trexo, that would be more portable and less costly and provide the same benefits as larger systems. They also designed Trexo to be modular so that it can adjust and grow with the child.

“We are really fortunate to be part of the Hatchery,” says Manmeet. “We had access to amazing resources and amazing mentors.”

The team plans to use the prize money to pursue regulatory approval from Health Canada. Their initial plan is to target the 120,000 physiotherapy clinics across North America. They also believe some families will want to purchase the device for themselves.

BOMBERobotics also received support from U of T’s Health Innovation Hub (H2i) and from the Department of Computer Science Innovation Lab. Read more about the team 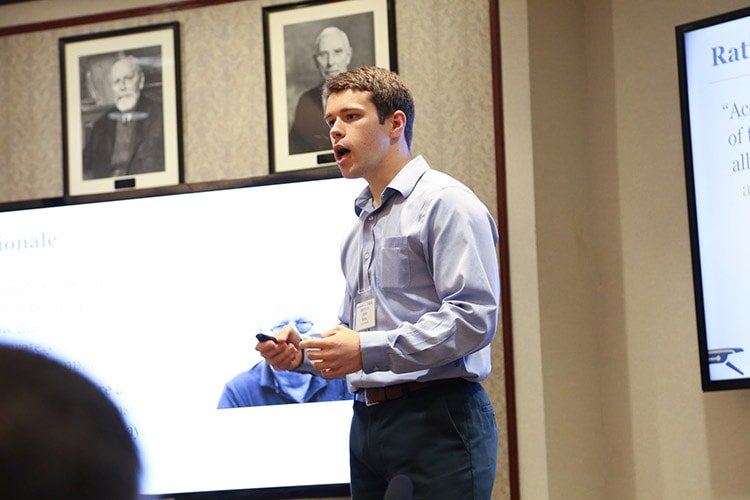 Approximately two-thirds of modern general surgeries use minimally invasive techniques, with smaller incisions and longer instruments, to reduce trauma and accelerate healing time. But remotely operated or robotic tools make it harder for a surgeon to feel the response of the tissues they are operating on. This can increase the chance of causing additional injury: up to 12 per cent of medical errors are caused by inappropriate application of force during surgery.

SensOR has a solution: a thin film that easily wraps around any surgical instrument and translates physical force into electrical signals. The force-feedback data is wirelessly transmitted to a receiver and a visual display, making it easy to see how much force is being applied. These visual cues can be integrated into the monitors that surgeons already use to see inside the body.

SensOR’s CEO Robert Brooks credits the team’s Hatchery mentors with helping them to articulate their vision.

“We had this wonderful technology, and we knew exactly what we were doing, but the only people who understood it were surgeons,” he says. “Our mentors were absolutely instrumental in helping us nail down exactly what our value proposition was so that we could connect with investors.”

SensOR’s initial market will be surgical training programs. Once the product is approved by Health Canada, the team hopes to start using it in real surgeries. 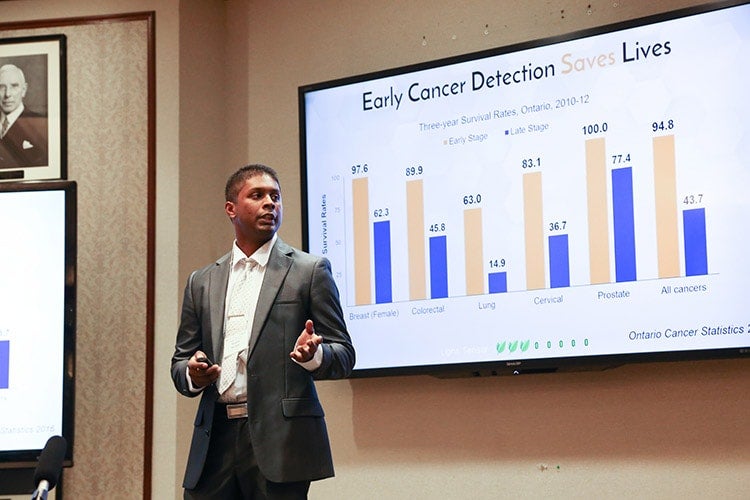 Enrich Bioscience formed around a technology that could detect cancer earlier using a fast, simple and non-invasive diagnostic test. It was founded by Ricardo Harripaul, a PhD student in the Faculty of Medicine, and Tarang Khare, who completed his PhD in molecular genetics and is now pursuing a part-time MBA at the Rotman School of Management.

“Our Hatchery mentors have done so much for us,” says Harripaul. “We are scientists and didn’t know much about business. They spent a lot of time teaching us how to present to people who aren’t scientists.” The team has applied for a provisional patent on their technology and aims to start the validation experiments next year.