Former U of T President Birgeneau to be honoured with leading U.S. science award 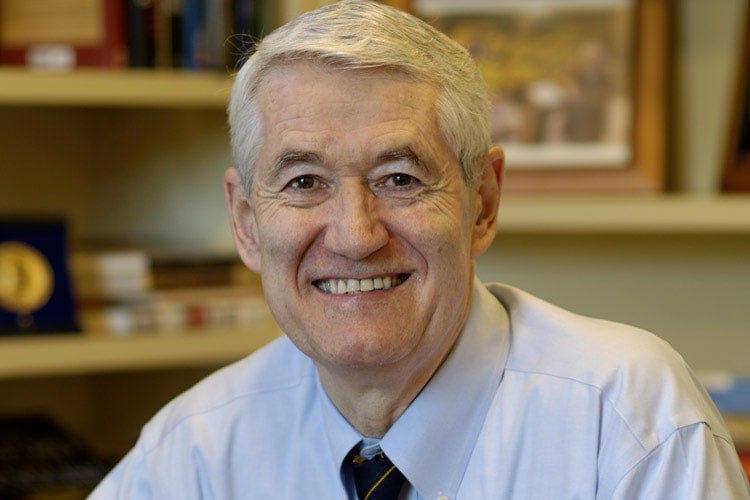 Former University of Toronto President Robert Birgeneau is being awarded the 2016 Vannevar Bush Award from the United States National Science Board (NSB), one of the most prestigious academic awards in the United States.

The NSB will present Birgeneau with the award next month “for his exceptional public service and scientific leadership – including lifelong, high caliber research committed to the public good, tireless advocacy for the nation’s research universities and unrelenting efforts to advance equity and inclusion in higher education and science.” The award is named for Vannevar Bush (1890-1974), who helped establish federal funding for science and engineering as a national priority and played a pivotal role in the creation of the National Science Foundation.

Birgeneau, who served as U of T president from 2000-2004, said the award is a great honour. “For a scientist in the United States, this is probably the most important award, next to the Nobel Prize,” he told U of T News.

A graduate of St. Michael’s College at the University of Toronto in 1963, Birgeneau has had a distinguished academic career. He taught at MIT for 25 years and served as Dean of Science there before coming back to U of T as president in 2000. After leaving U of T, he served as chancellor of University of California at Berkeley, where he currently holds the Arnold and Barbara Silverman Distinguished Chair in the Departments of Physics, Materials Science and Engineering and Public Policy. Besides his academic leadership, he is known for his research on superconductivity. In 2013, U of T awarded him an honourary Doctor of Science degree “for his excellence in the academy and outstanding contributions to higher education.”

“On behalf of the U of T community, I would like to congratulate Bob Birgeneau on this wonderfully fitting accolade,” said U of T president Meric Gertler. “Throughout his outstanding career, including his time as leader of our university, he has been a champion of excellence and equity, and he has shown how the two go hand-in-hand.”

Vivek Goel, U of T’s vice-president, research and innovation, said Birgeneau was well deserving of the honour. Goel worked closely with Birgeneau during the latter’s tenure at U of T, first as vice-provost and later as vice-president and provost. “Robert Birgeneau was a dedicated and passionate leader at U of T who inspired us to achieve excellence on a global stage in our teaching and research.  I am happy that the National Science Board is recognizing his remarkable achievements and his commitment to diversity and excellence.”

Birgeneau said he’s always felt a kinship with Vannevar Bush, because much of his research was carried out in the Vannevar Bush building at MIT. “It is especially gratifying to me to be honored for simply always trying to act responsibly and do the right thing. In particular, I have worked hard to ensure that every person, regardless of his or her gender, race, religion, sexual orientation or immigration status, can be a full participant in our great science and technology enterprise.”

He attributed his winning the award in part to his leadership positions at U of T and Berkeley. Until he served as president of U of T, he noted, his academic career had been spent at private institutions. Working at U of T, and then at Berkeley, showed him the importance of ensuring that everyone has the opportunity to participate in education and science.

He said he often visits his alma mater (where he and his wife of 52 years first met), and still maintains friendships with former St. Michael’s classmates.

Birgeneau is a fellow of the U.S. National Academy of Sciences, the Royal Society of London, the American Philosophical Society and other scholarly societies. He has received numerous awards for his teaching and research on the fundamental properties of materials, as well as honorary doctorates from a number of universities. Among his many awards are a special Founders Award from the American Academy of Arts and Sciences, the 2008 Carnegie Corporation Academic Leadership Award as a "Champion of Excellence and Equity in Education," and the 2009 Shinnyo-en Foundation's 2009 Pathfinders to Peace Prize for his contributions to bringing about a more peaceful world. In 2012, Birgeneau received the Compton Medal from the American Institute of Physics.