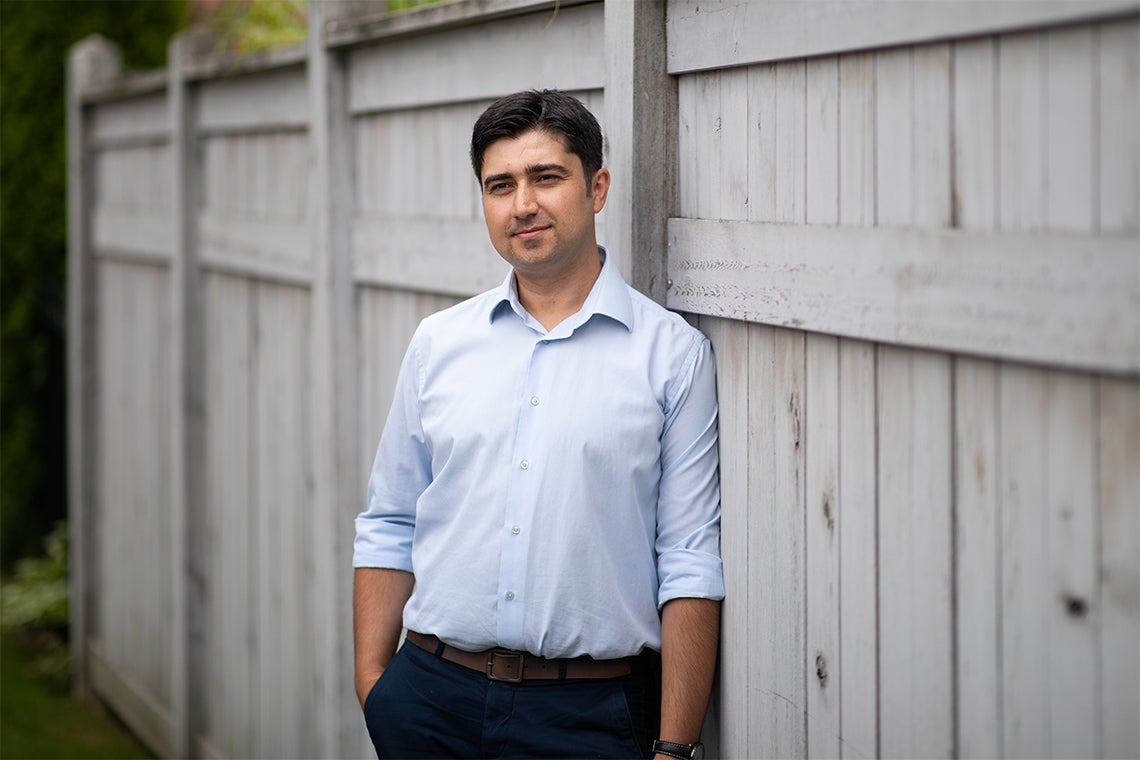 With the help of U of T's Scholars-at-Risk Fellowship, Serdar San is conducting PhD research on how political upheaval and regime changes have impacted Turkish policing and police – including himself (photo by Nick Iwanyshyn)

Serdar San was well into his PhD in criminology at the University of Toronto in late 2016 when his research and personal life were turned upside down.

A Turkish National Police lieutenant who originally came to Canada on a Turkish police scholarship, San was suddenly fired from the force as an increasingly authoritarian government in Turkey looked to crack down on its institutions of policing in the wake of a failed military coup.

Not only did the move wipe out San’s career and a decade’s worth of pension contributions, it meant he could no longer travel to Turkey to conduct interviews for his dissertation – a comparative study of counter-terrorism policies in Turkey and Canada with respect to home-grown terrorism – as he risked harassment and the seizure of his passport.

So, with the help of U of T’s Scholars-at-Risk Fellowship, San pivoted his research to a different topic, the importance of which he understands all too well: How political upheaval and regime changes have impacted Turkish policing in recent decades.

“This fellowship will be a great financial support for me in finishing my dissertation, which I strongly believe will both contribute to scholarly understanding of policing but will also help draw scholarly and public attention to the human rights abuses of the current regime in Turkey,” says San.

Awarded by the School of Graduate Studies in a partnership with Massey College, the fellowships award $10,000 to outstanding graduate students who are seeking asylum or refugee status in Canada, or whose study has been impacted by political upheaval in their country of study. It also grants recipients the status of Scholar-at-Risk at Massey College, and appoints them members of Massey College without having to pay a membership fee.

“Joining the Massey College community will help me meet new colleagues in different disciplines and with varying interests and life experiences, which will help me broaden my horizons as well,” San says.

San first came to Canada in August 2013 to pursue a master’s degree in criminology at the University of Ontario Institute of Technology, with the intention of returning to his policing duties in Turkey after graduation.

However, he later decided to stay in Canada to complete a PhD at U of T under the supervision of Matthew Light, an associate professor of criminology and sociolegal studies and European, Russian and Eurasian studies in the Faculty of Arts & Science.

San’s decision to extend his stay in Canada was also influenced by turmoil in his home country.

“Things were changing in Turkey during that time after widespread mass protests against the government and increasing authoritarian policies,” he says. “Critics began to be arrested and imprisoned, and they started a crackdown on the police force shortly thereafter, which intensified after the military coup attempt in July 2016.”

He says the government was keen to rid its police forces of democratic-thinking and progressive-minded police officers and replace them with regime loyalists.

“I personally see myself as one of the members of a cohort of younger officers dedicated to raising the professional level of Turkish policing by improving police-community relations and by addressing Turkey’s serious problem of terrorism in a more democratic and rights-respecting manner,” he says. “But after the government’s authoritarianism solidified, these open-minded and more democratic-thinking officers were labelled as traitors ... mostly because they’re critical thinkers.”

As many as 100,000 public servants, including police officers, were fired in the aftermath of the failed 2016 coup, according to the New York Times. San says that, to his knowledge, more than 33,000 police officers have been dismissed from their positions.

“After the purge of thousands of police officers, they immediately recruited new ones who they saw as more loyal in the increasing repression against dissidents, and who would be more helpful in the crackdown.”

It’s only the most recent example of political transitions influencing Turkish policing, according to San. His doctoral research will examine how the relationship between political regimes and police has played out in Turkey over the last 40 years, starting from the period immediately after the 1980 military coup.

“I will explore whether and how different political regime types and political transitions infuse the development of policing, and also how new authoritarian regimes construct or reconstruct their internal security or policing institutions,” says San. “I’m doing this study because I think Turkey is an important case because it has experienced repeated and very dramatic political transitions and changes in policing over the last 40 years.”

Changing his research focus has not been without its challenges. “As a result of my new project, I have had to re-tool as a scholar and familiarize myself with an entirely new scholarly literature, which extends the amount of time I’ll need to complete my doctoral studies,” San says.

“Professor Light has been really helpful and a very good guide and supervisor for me in this project.”

Despite his personal, professional and academic ordeals, San is now squarely focused on continuing his transition from police officer to U of T scholar.

“All the things I’ve lived in the last four or five years have helped me learn how to become a more thoughtful and informed citizen, especially in terms of knowing your rights and liberties and knowing how democracy works,” he says.

“I hope that all this experience – and further experiences that I’ll have with the help of the Scholars-at-Risk Fellowship – will make me a more informed citizen, both in Canada and maybe in a more democratic Turkey in the future.”