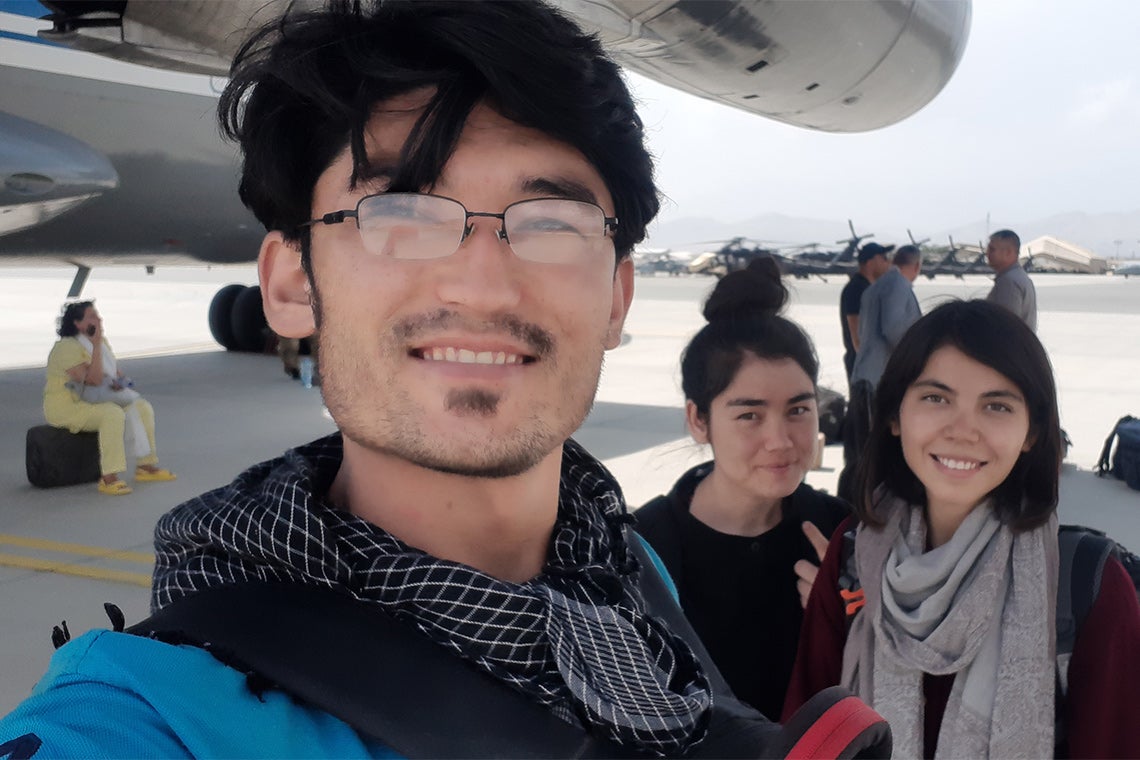 Jalal Nazari, who would go on to study journalism at U of T as part of the Dalla Lana Fellowship in Global Journalism, snaps a selfie in front of a Ukrainian military plane before fleeing Afghanistan on Aug. 20, 2021 (photo courtesy of Jalal Nazari)

Jalal Nazari fled his home country of Afghanistan one year ago this month following the Taliban takeover. He found his way to the University of Toronto, where he participated in the Dalla Lana Fellowship in Global Journalism – a program that trains and mentors subject matter experts from around the world so they can provide deeper reporting for global media outlets. Working with U of T News writer Mariam Matti, Nazari agreed to share, in his own words, the details of his difficult and often dangerous journey from Kabul to Toronto – and what his future holds.

My last week in Kabul, Afghanistan was filled with uncertainty.

At the airport under the blistering heat, I was surrounded by more than 20,000 Afghans who were desperate to leave – some even clinging to an American military jet as it was attempting to take off.

I did not know then that my journey would eventually take me to the University of Toronto.

The Taliban took over major cities on August 15, 2021, shortly after the U.S. military withdrew operations in the country. Since I worked as a fixer for the Wall Street Journal in its Afghanistan bureau, I was lucky to have colleagues who helped me navigate the scary and chaotic situation.

At the Kabul airport, people were dehydrated, exhausted and scared. I saw dead bodies and people being beaten by members of the Taliban for no reason. The U.S. military fired shots in the air to disperse crowds.

Along with my Journal colleagues, I accessed the American military’s side of the airport.

I remember the moment we crossed to safety, sitting in the back of a U.S. marine’s pick-up truck with the wind blowing on my face. I would spend three nights sleeping under the wing of an airplane, but I felt free. I felt like I was released from prison.

After spending a week at the Kabul airport, our plane took off on August 21, 2021, bound for Kyiv. During my three-month stay in Ukraine, I decided to apply for an asylum visa in Canada. The Wall Street Journal helped me enroll in U of T’s Dalla Lana Fellowship in Global Journalism so I could continue to pursue one of my passions.

Looking back at my life in Afghanistan, I now realize how hard it was to live in a conflict zone. In the last five years I lived in Kabul, there wasn’t a day without an explosion or suicide attack.

I lost several friends in these attacks and escaped several attacks myself. I was not able to visit my parents because they lived in another city and the highways were dangerous for people like me. I’m part of one of the most discriminated minority groups in Afghanistan – the Hazaras. We’ve faced persecution for decades and now fear the rule of the Taliban.

I studied English language and literature at Balkh University back home. It wasn’t my first choice – I have always been interested in gender and sexuality studies, topics that are considered taboo in Afghanistan. Since there’s very little sex education in the country, it has always been a dream of mine to fill that gap. Before the pandemic, I organized secret meetings of up to 15 to 20 young people. I led discussions and recommended books for people who wished to learn more about gender and sexuality. 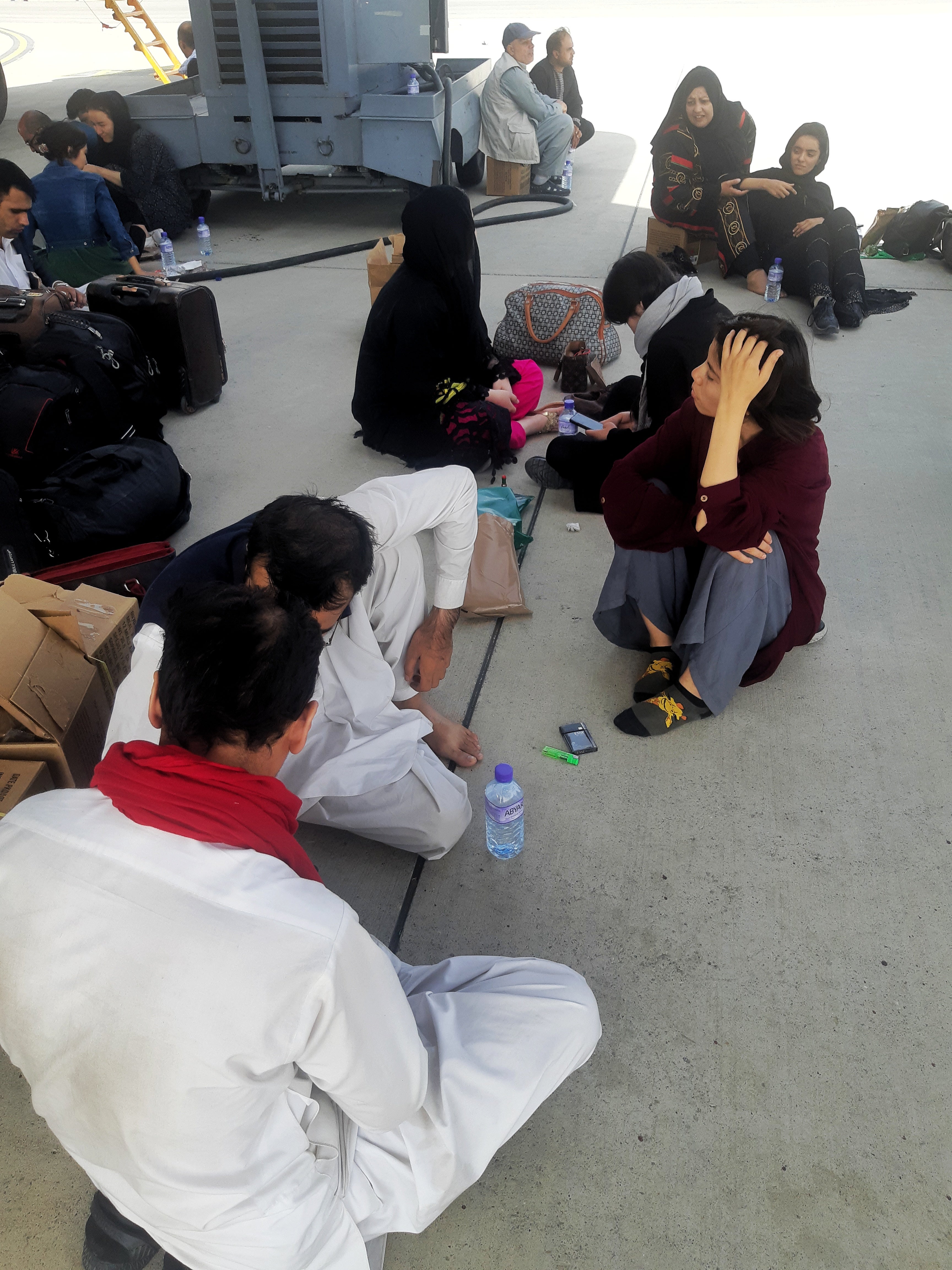 While I was doing that, I was also teaching English in my second year of university. I started taking on jobs as a translator for local companies, researchers and journalists.

Working as a translator opened my eyes to the world of journalism, which I found fascinating.

That’s around the time I met freelance photojournalist Paula Bronstein on an assignment. I started working with the Wall Street Journal after she introduced me to the paper’s Chief Foreign Affairs Correspondent Yaroslav Trofimov. I contributed to stories by scheduling and translating interviews.

My experience with the Journal made me think deeply about the media’s role in shaping public discourse and informing people’s thinking. It also helped me become a more empathetic person who was understanding of people’s adversities.

In short, I came to believe the work that journalists do is very important.

My day-to-day life has been very different since arriving in Toronto last November. I lived at an airport hotel until Rob Steiner, director of the Dalla Lana Fellowship, suggested that I move to Massey College. With the help of Nathalie Des Rosiers, the college’s principal, and Catherine Fowler, the college’s chief administrative officer and bursar, I was able to move in at the end of January.

As a Dalla Lana Global Journalism Fellow, I was able to learn even more about my craft. I learned about podcasting, story writing and structure, investigative journalism, and the policies and procedures Canadian media outlets follow. I learned how to pitch a story and how to follow up with an editor – all skills that will help me in my professional career.

It was a pleasure to meet my classmates, who all came from different backgrounds. There was constant collaboration in the classroom – brainstorming story ideas and reading each other’s articles and providing feedback. I’ve built a reliable community and network through the fellowship – one that I valued immensely as a newcomer trying to navigate my personal and professional life in Canada.

I called Massey home for more than six months. I was immediately drawn to the small water fountains, four benches in the courtyard and the beautiful lighting at night. About 60 students live at the college before the summer vacation and they come from all corners of the world and vastly different social and academic backgrounds. I loved getting to know prominent authors, experienced journalists, award-winning researchers and many great people.

Apala Das, a PhD candidate in English literature from India, was my first friend at U of T. I met her in the courtyard the night I moved in, and we quickly connected. I figured it was because of our cultural similarities and the fact that we were both far away from our families. Our conversations often centered around topics like race, migration and cultural differences between South Asia and Canada. She shared with me how hard it was for her to adjust to unfamiliar social and cultural norms when she first moved to Canada four years ago, a process I’m going through as I navigate living in Toronto.

When I think back to my last week inside the Kabul airport, it was hard to picture my future. I am grateful to be in Canada and to be a part of the U of T community because it has given me a sense of direction. I also feel a sense of freedom to pursue my interest in gender and sexuality studies – while I continue to pitch stories and work in the journalism industry.

I have continued pursuing my side passions as well – writing poetry in Farsi and practicing the art of calligraphy in Farsi and Arabic. I’ve been invited to Australia later this month to perform poetry as part of a theatre show called A Poetic Crash Course in the Language of Love.

These are opportunities I do not take for granted.

Unfortunately, my freedom has not come without a price. It is not easy to watch my family and Afghans experience hardships under the Taliban rule. But my experience has made me all the more determined to be somebody who can help advocate for a better world.