Five U of T Engineering innovations making the future greener 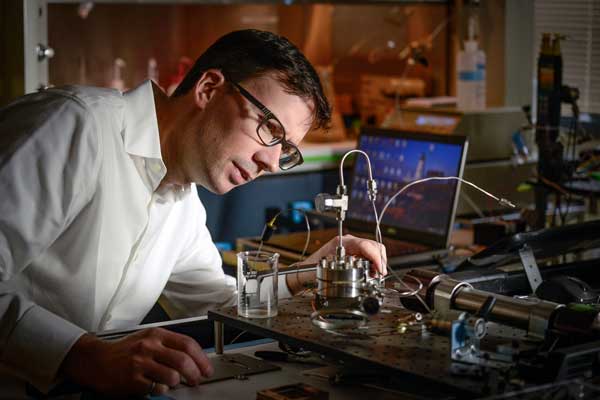 The University of Toronto today unveiled its plan for taking action on climate change in a bold report, Beyond Divestment: Taking Decisive Action on Climate Change.

Read more about the 14-point plan

“The University’s most valuable and effective contributions to the global effort to avert and mitigate the consequences of climate change will flow from our fundamental role as an institution of research and education,” said President Meric Gertler.

These five projects are just a few of the innovations underway at U of T Engineering that are helping make the world greener, from the fields of Nicaragua to the nearest airport.

A group led by U of T Engineering professor Amy Bilton is partnering with residents of Pedro Arauz, Nicaragua to design and construct a water-pumping windmill, providing critical irrigation during the area’s long dry season.

The project was launched as part of a fourth-year course in the department of mechanical & industrial engineering. Over the last two years, three different teams of undergraduate students have worked closely with members of the local community as well as the Winds of Change initiative to make the windmill a reality.

The area has plenty of groundwater and dug wells, but hand pumps — currently the most widespread pump technology — are simply not powerful enough to produce the thousands of gallons of water required for crop irrigation. The use of diesel and electrical pumps is limited by a lack of infrastructure, high cost and difficulties with the importing of goods. By contrast, wind pumps can be built and maintained using locally available materials, and the climate in Nicaragua is windy enough to provide the required energy.

“From the beginning, it was engineering students working together with community members who provided great suggestions in terms the local practices and available resources,” said Bilton. “Everyone was so kind and so welcoming. I think that was really what moved the students and helped motivate them as they worked on the project.”

Read more about the Winds of Change project U of T Engineering professors are developing innovations in airplane design that could save hundreds of millions of litres of jet fuel every day and significantly reduce the environmental impact of flying. 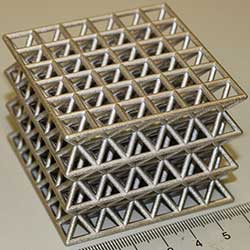 Professor Craig Steeves of the University of Toronto Institute for Aerospace Studies is collaborating with Professor Glenn Hibbard of materials science & engineering. They're designing materials that incorporate small-scale truss-like structures, similar to the scaffolding used inside the Statue of Liberty or for the Eiffel Tower.

The materials are 3D printed using polymers and then coated with ultra-high strength nanocrystalline metal. Using computer models as well as physical prototypes, the team designs and optimizes these structures for strength, stiffness, weight and other desirable properties.

“New techniques like 3D printing or automated fibre placement are enabling us to manufacture structures that are much more complicated than anything we could build in the past,” says Steeves. “This enables us to design structures with unprecedented capabilities.”

Learn more about the Centre for Research in Sustainable Aviation

Need green energy? Someday you may need to look no further than the green scum coating the nearest puddle. 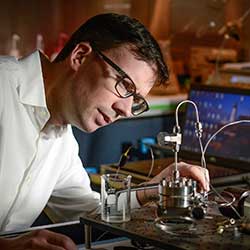 Among the fastest-growing photosynthetic organisms on earth, some species accumulate high levels of fat and oil that could be refined into biofuels, or sugars that could be fermented into ethanol.

Despite decades of research, there is still much uncertainty about the exact conditions that each species needs to grow at its optimal rate, or accumulate the most product. The number of variables — light intensity, light spectrum, nutrient and CO2 levels, temperature and more — makes designing experiments to cover all possible combinations both difficult and costly.

Sinton and his team are addressing that problem using their expertise in microfluidics and optofluidics, two fields that look at how fluids and light can be conducted through very small channels or optical conductors. They recently designed a “lab on a chip” that contains hundreds of individual chambers in which the microorganisms can grow.

“It’s definitely unique – nowhere in Canada will you find a vehicle like this,” says professor Olivier Trescases of The Edward S. Rogers Sr. Department of Electrical & Computer Engineering. Trescases and his lab are working to optimize the battery life and power systems of the electric vehicle—including integration with renewable sources.

“It’s exciting because this is far beyond what we could possibly build in-house. Even the chassis is custom-designed to house the massive 380-kilogram lithium battery pack. We even have a rooftop solar installation that can be used to charge this EV and turn it into a true zero-emission vehicle.” We can’t control when the wind blows and when the sun shines, so finding efficient ways to store energy from alternative sources remains an urgent research problem. Now, a group of researchers led by U of T Engineering professor Ted Sargent may have a solution inspired by nature.

The team has designed the most efficient catalyst for storing energy in chemical form, by splitting water into hydrogen and oxygen, just like plants do during photosynthesis. Oxygen is released harmlessly into the atmosphere, and hydrogen, as H2, can be converted back into energy using hydrogen fuel cells.

“Today on a solar farm or a wind farm, storage is typically provided with batteries. But batteries are expensive, and can typically only store a fixed amount of energy,” says Sargent. “That’s why discovering a more efficient and highly scalable means of storing energy generated by renewables is one of the grand challenges in this field.” U of T Engineering Communications