First signs of spring: U of T beekeepers unwrap their hives

U of T student beekeepers do it for the love of bees, not just the honey, says the club's co-president

Students cramming for finals aren't the only busy bees on campus.

A few storeys above the Trinity College quad, hives cared for by the student-run U of T Beekeeping Education Enthusiast Society are already humming with activity – a sure sign of spring.

On a sunny April day, Laura Curran, co-president of U of T BEES, and fellow club member Tineke Kruytbosch climbed two flights of stairs and a narrow ladder to access the roof and check on their Italian honeybees for the first time since the winter, when the bees went into a semi-slumber.

Curran was a tad nervous. Last fall, hives on top of the ivy-covered Faculty Club on Wilcocks Street fell prey to American foulbrood, an incurable and highly contagious disease, which in Curran's words “turns the brood to soup and destroys the hive.”

Read more about U of T BEES in the Toronto Star

Any worries about the safety of the Trinity colony disappeared when the students saw the hives teeming with life. Bees zipped in and out of their nests, some carrying pollen. 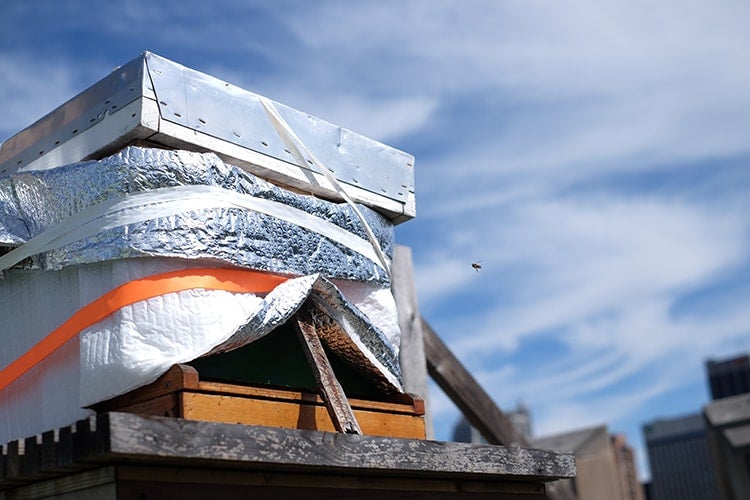 A bee returns home. The hive is sealed in a “bee cozy” for the winter (photo by Geoffrey Vendeville)

Kruytbosch, the new manager of the Trinity hives, was excited to remove the reflective “bee cozies,” which keep the bees warm for the winter.

“It's kind of like opening a present,” she said.

She and Curran slipped on gloves, “ super trendy” head-to-ankle protective suits with a netted veil and approached the hives from the side, staying out of the bees' way. 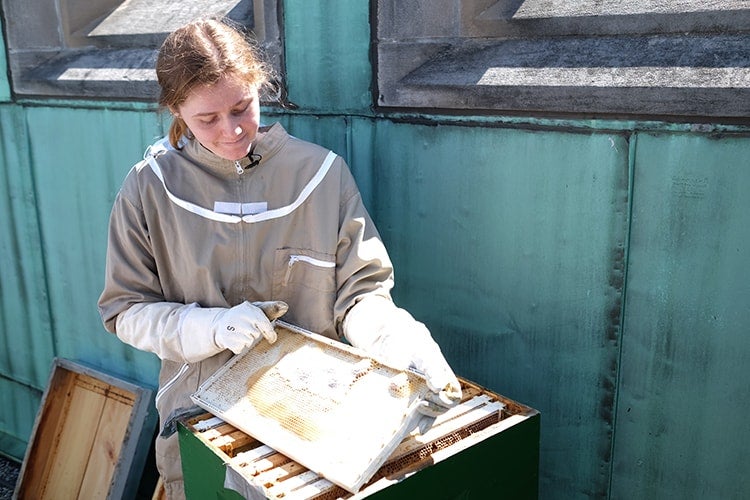 Curran, a second-year student in environmental sciences and forest conservation, points to a hive frame (photo by Geoffrey Vendeville)

Although the bees aren't usually aggressive, Curran has been stung four times – on her ankle, leg and elbow. Kruytbosch has never been stung.

Read about U of T BEES in Metro

“You think you're going to be stung because that's what you're told your whole life – bees sting. Right?” she said. “But once you realize you're really safe in the bee suit, it's actually really nice to just observe them. It's meditative.”

The students gently removed the cozies and used a bee smoker  – a small, metalic device with hand-held bellows – to pump smoke into the hives in order to calm the colony before peeking inside. 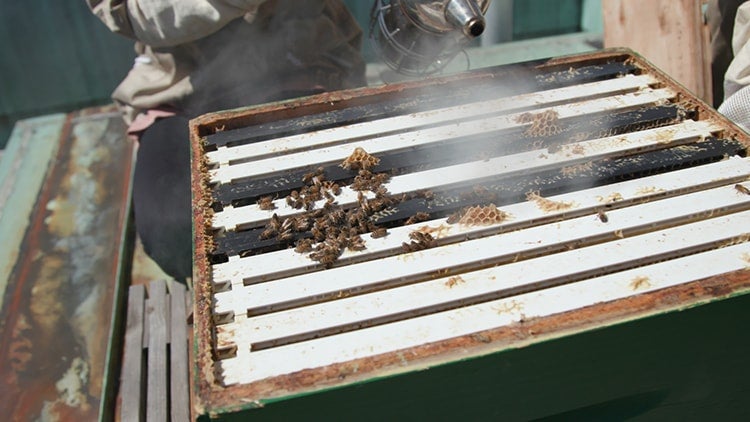 Two of the three hives were alive and well, but one didn't last through winter – probably because it didn't get enough sun, Curran guessed. The students are planning to transplant a “nuc” colony, which is short for “nucleus,” to replace the dead colony.

In the fall, the students will gather honey from the hives if there is a surplus. But more often than not, they leave the honey for the bees so that they can sustain themselves over the winter.

“We don't care about the honey production so much,” Curran said. “The club is for promoting pollination and trying to help the bees survive a little better.”

Scott MacIvor, an assistant professor of urban ecology at U of T Scarborough, says one of the best ways to help bees is by becoming a gardener.

“Honeybees are domesticated like cows and sheep, and compete with wild native bees for food,” he said. “Cities are increasingly shown to be hotspots for wild native bees (more than 300 species in the GTA, 92 per cent are native), and so encouraging hobby beekeeping might have a negative impact.

“On the other hand, honeybees can be a ‘gateway’ bee to finding out about the needs of all bees and other pollinators. Participating in clubs where groups share responsibilities and learn is far better than individuals each having their own hive(s),” he added.

Read a Q & A with MacIvor on wild bees

Professor Sandy Smith, an entomologist in the Faculty of Forestry and the BEES's academic point person, says the club gives students in Canada's largest city a rare chance to get in touch with nature.

“It's always good if we pay attention to the natural world, and honeybees do that for city dwellers,” she said.

Apart from the U of T BEES's hives, there are also colonies in the U of T Skygarden, a volunteer-run green rooftop at the Earth Sciences building, and at U of T Scarborough, Smith said.

Like the bees, the students in the beekeeping club also learn to work together. They organize hive tours in the summer and give workshops teaching people to make candles out of beeswax.

“I see them take on a sense of nurturing, looking after things, and that's a very rewarding and satisfying experience,” Smith said.