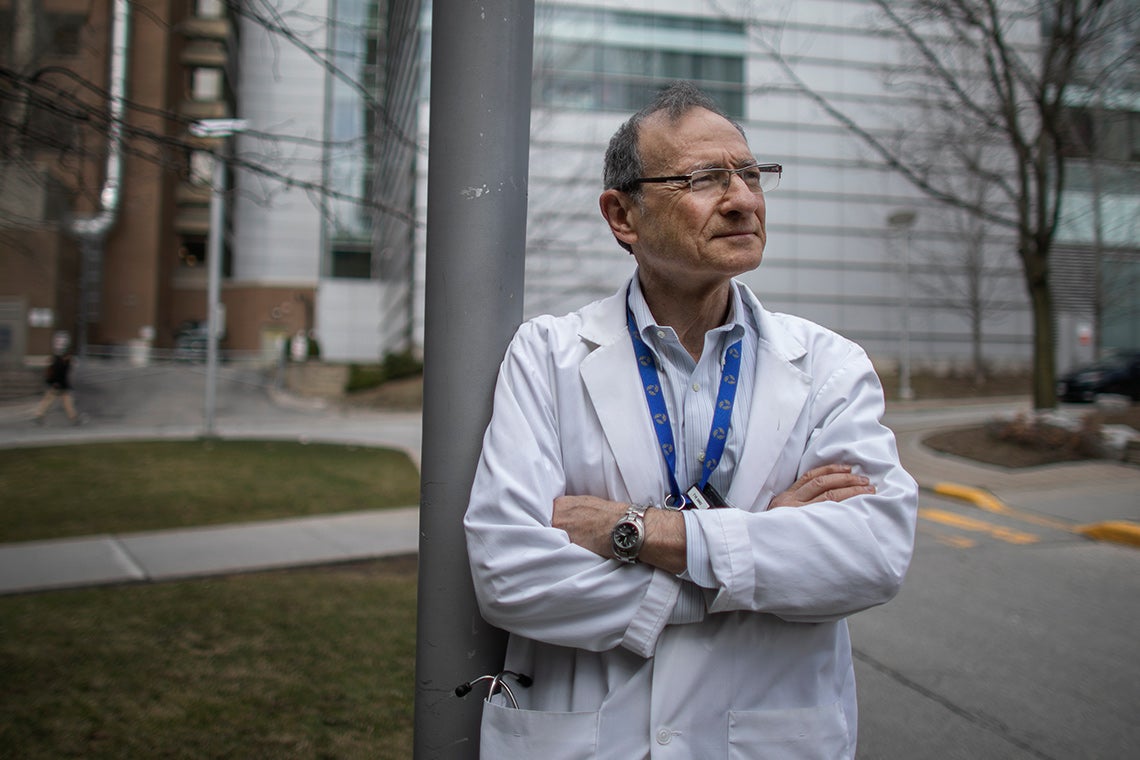 Joe Fisher, a U of T professor and staff anesthesiologist at Toronto General Hospital, co-founded Thornhill Medical in 2004 after developing a portable intensive care unit to treat critically injured members of the military (photo by Nick Iwanyshyn)

A company founded by two University of Toronto researchers will be manufacturing a portable ventilator that could help Canadian patients with COVID-19.

The portable intensive care unit, operated by battery power, has a ventilator and can perform vital signs monitoring, among other features.

Originally developed to treat members of the military who had been critically injured and were in need of transport, the technology will now be used to assist patients who need life support due to the current global pandemic, according to Dr. Joe Fisher, a professor in the department of anesthesiology and pain medicine in the Faculty of Medicine and a staff anesthesiologist at Toronto General Hospital in the University Health Network (UHN).

“I think that this device has several roles in the COVID-19 pandemic,” says Fisher, who is co-founder of Thornhill Medical, which sells the device. “The first role is to help with a surge in supply – if you want to open up a new ICU bed, all you need is this and a stretcher, and you can do that.”

Thornhill Medical was cited by Prime Minister Justin Trudeau in a speech Friday morning that focused on Canadian innovators who will be helping in the fight against COVID-19, which now has more than 1,000 confirmed and presumptive cases across the country.

“Dr. Fisher and his colleagues have always thought ahead, ‘What if? What if these devices were needed to support large numbers of patients?’” says Dr. Beverley Orser, professor and chair of the department of anesthesiology and pain management. “They have used their creativity, knowledge and ability to form teams to create these technologies so we can share them with the world.

“Dr. Fisher has always been committed to doing the right thing and sharing technology to support others. He is an incredible innovator.”

Fisher and Dr. Ludwik Fedorko, an associate professor in the department of anesthesiology and pain Medicine, founded Thornhill Medical in 2004, a spin-off of work done at U of T and UHN.

Fisher says his hope is that the device will provide life support and vital signs monitoring to those in dire circumstances.

“I think that its main function is to provide a compact platform to provide critical care. It may also provide back-up care when there is no electricity and when no oxygen is available,” says Fisher.

There are other important features, he says.

“This was also designed with transport of patients in mind – such as if you need intra-hospital transport, to take a patient from the ICU bed to CT scan or to the operating room. Right now, it’s extremely challenging to do that,” says Fisher, adding that it takes a significant amount of effort by staff to move a patient.

“This device is easily attached to a hospital bed or stretcher, provides all the ICU functions to the patient and you just roll out the bed and can move them. If the patient needs to be transported to another hospital, it simply fits into the ambulance at the patient’s side, continuing the same level of life support.”

There have been widespread concerns expressed about the availability of ventilators for COVID-19 patients as the number of people who have contracted the disease continues to rise.

While the portable intensive care unit will now be used as part of the response to COVID-19, the inspiration for the device dates back more than 15 years.

“I came to the attention of the United States Marine Corps around 2004, when they were looking for a device that would get rid of their use of oxygen tanks in the field,” says Fisher, adding the military moved away from using oxygen tanks in portable intensive care units during overseas operations because the oxygen tanks were targeted as explosive devices in battle.

“We were the first to provide the marines with the capability of providing injured patients with high oxygen concentrations without use of oxygen tanks. Once created, the device was tested and the Marines engaged us to add more and more features, including the ability to ventilate patients. Then they wanted to extend the design so it can be used during transport in a helicopter, aircraft or ground transport vehicle while a person remained on life support,” Fisher says. “These features had to be invented from scratch, and integrated with each other. And they were, even if it took five or six years."

Fisher says the portable intensive care unit was the result of a concerted effort by a group of people.

“First of all, it’s compact. Our device weighs about 40 pounds and works off batteries. In all other devices, batteries are for temporary use and need to be plugged in,” he says. “It’s completely self-contained: What you have in that little box is everything that there is in an intensive care unit – all the monitors, the ventilator and the oxygen. But in this case the oxygen doesn’t come from a tank but from the air.”