Finally! In a long-awaited sign of spring, cherry blossoms reach peak bloom on U of T's St. George campus 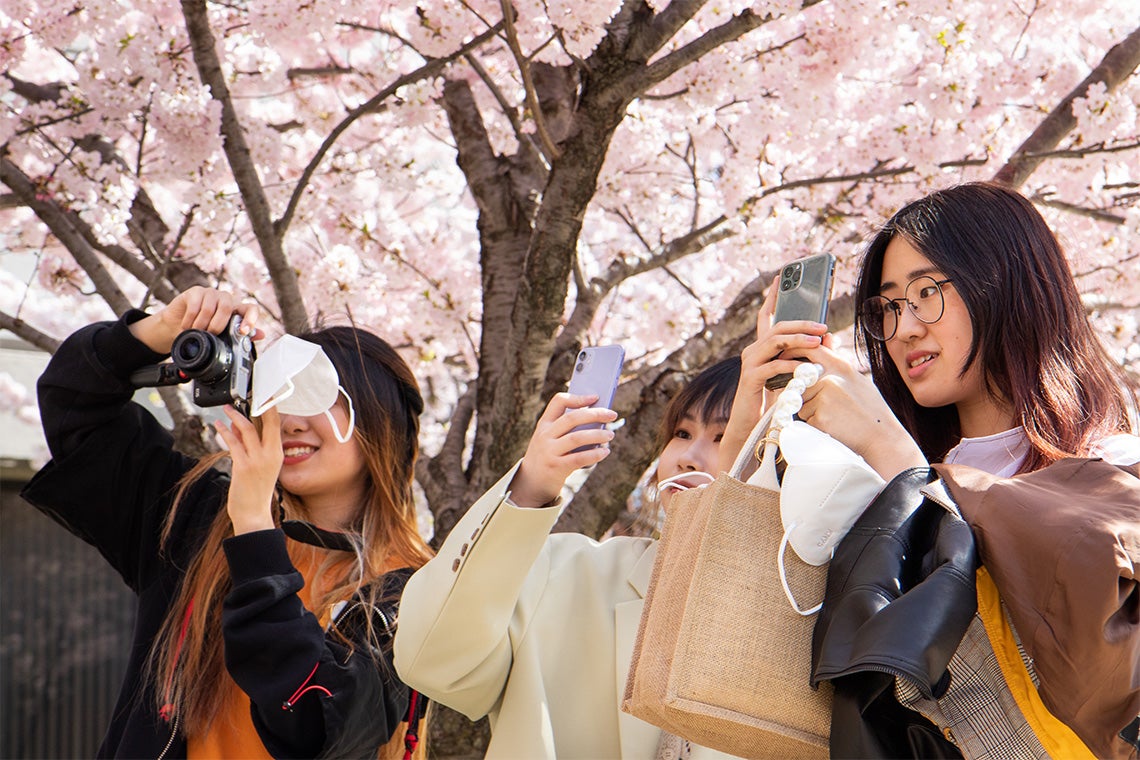 With the exam period wrapped up, and a long, snowy winter now firmly behind us, Bing Li and her friends met outside the University of Toronto's Robarts Library this week to take pictures amid a blush cloud of cherry blossoms.

The first-year student, who has yet to declare a major, struck poses atop a folding chair against a backdrop of pink petals.

“It's my first time seeing cherry blossoms,” said Li’s friend Yi Huang, who is in her third year studying statistics and actuarial science.

The undergraduate students were among a small crowd who wandered under the library's cherry blossoms on Thursday morning, taking in the view and snapping pictures for Instagram.

“The spring is bringing people back,” said Marry Xuan, a second-year student who is majoring in health and diseases and cellular and molecular biology. Yingxi Zhu, a fourth-year student majoring in math and statistics, even wore a matching pink plaid skirt and floral earrings for the occasion. 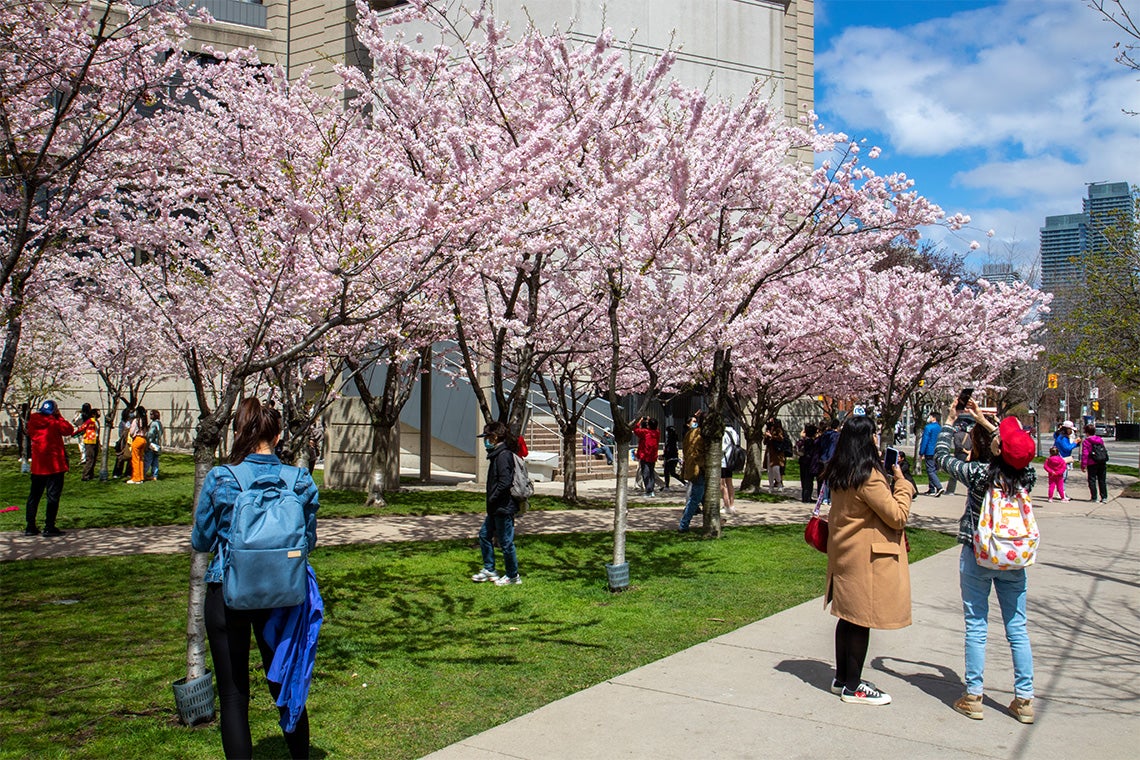 U of T received many of its Japanese cherry trees – known as sakura – from the Consulate General of Japan in Toronto as part of its Sakura Project. They have brought a dash of colour and sprinkle of joy to the St. George campus each spring since 2005.

The library planted 15 new cherry trees within the last year, bringing the total to 55.

In April, Michael Cassabon, director of advancement at U of T Libraries, attended a 10th anniversary event celebrating the end of the Sakura Project at the Japanese consulate.

“We celebrated this as an enduring symbol of friendship between U of T and the Japanese government,” Cassabon said, adding that U of T Libraries is home to important Japanese Canadian archives, including materials on the redress movement, a grassroots attempt by Japanese Canadians to hold the Canadian government accountable for human rights violations during the Second World War.

Each spring, Cassabon said he need only look out his window to be reminded of U of T's friendship with Japan.

“There's something magical about it,” he said. “They're right outside my office. When I look outside it's like I'm in a pink cloud.” 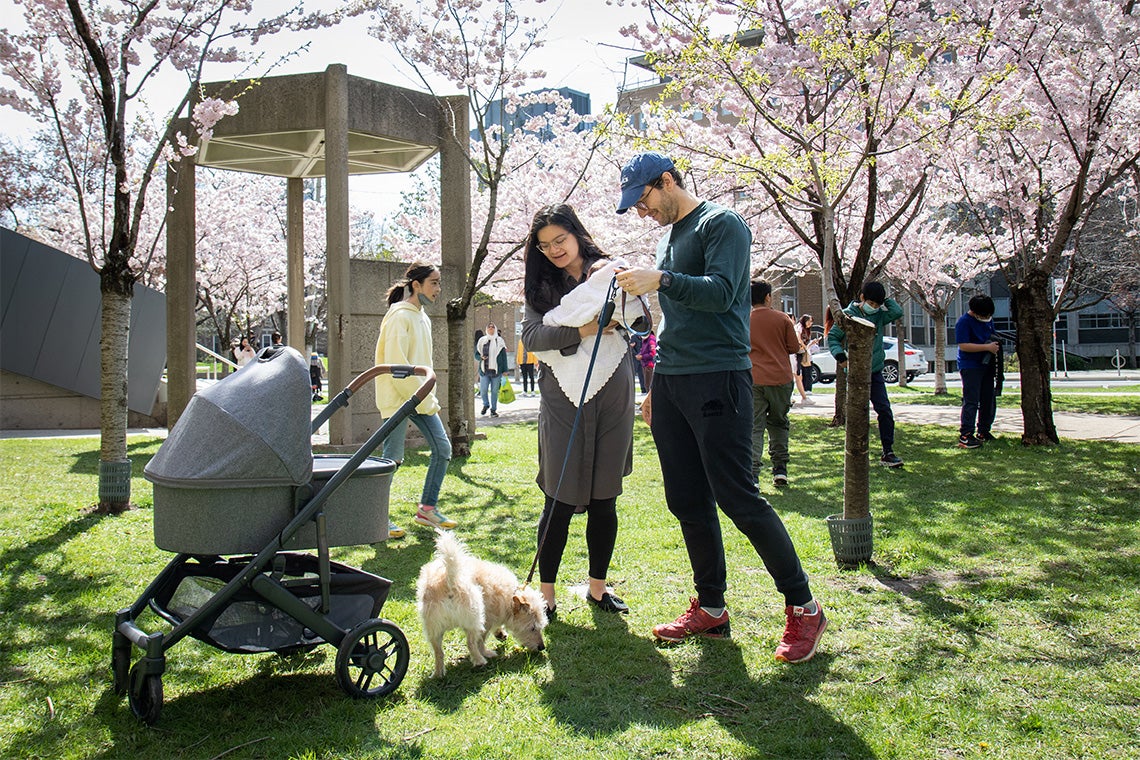 Cindy and Connor Ewing, both assistant professors in the Faculty of Arts & Science, take a stroll with daughter Margot and dog Buckley (photo by Geoffrey Vendeville)

Cindy and Connor Ewing, both assistant professors in the Faculty of Arts & Science, went for a stroll under the pink blossoms with their newborn daughter, Margot, and eight-year-old dog, Buckley.

Whether seeing the cherry trees in High Park or at U of T, the sight of the blossoms each spring doesn't get old, according to Connor. “It's special... it's a sign of spring,” he said. 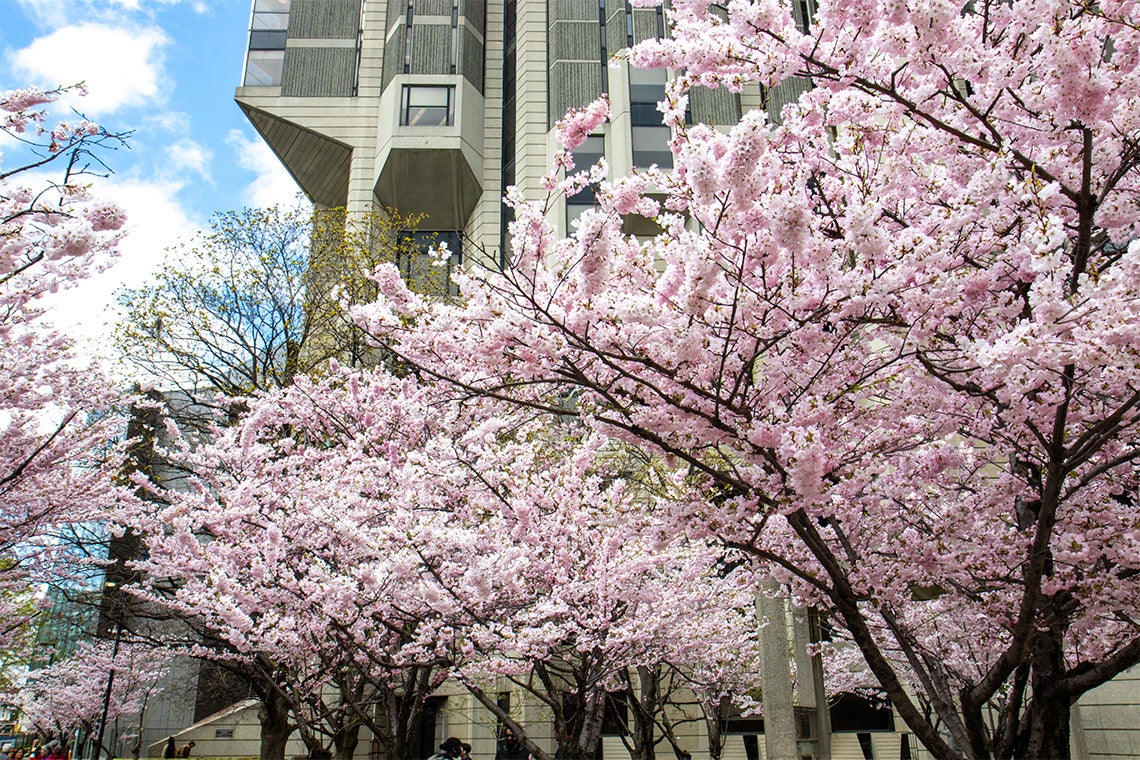 Hana Kim, director of U of T's East Asian Library, said seeing peak bloom this year was extra special after the long and ongoing fight against COVID-19.

“I feel that the pastel colours give me healing power and hope,” she said. “I feel more hopeful about the future during this uncertain time.”

The cherry trees also remind Kim of the viewing rituals she took part in as a child in South Korea.

“Cherry blossom viewing is very popular in East Asia,” Kim said. “It marks the arrival of spring. In spring, people there often gather and families unite for cherry blossom viewing, which has been practised for a long time. Many celebrations and festivals take place during the blooming season. The cherry blossom generally represents a time of renewal and optimism.”