‘Fantastic Voyage’: U of T researchers create nano-bot to probe inside human cells 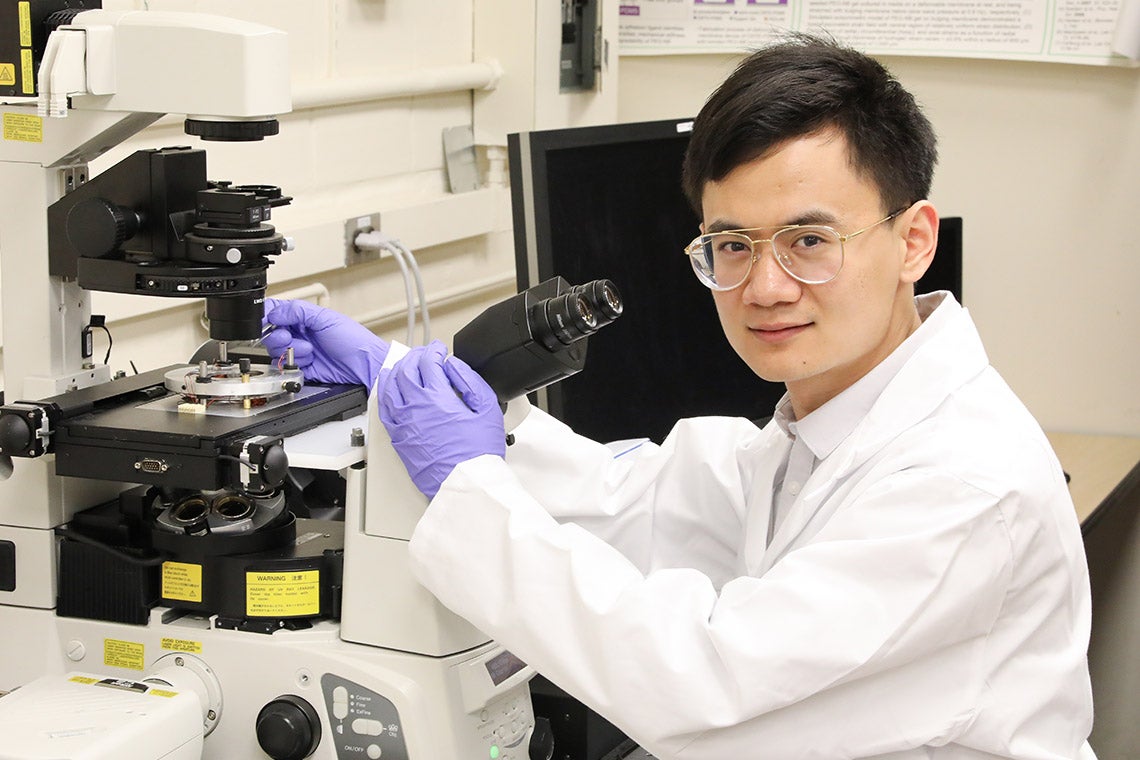 PhD candidate Xian Wang has developed a magnetic nano-scale robot that can be moved anywhere inside a human cell. The tool could be used to study cancer and potentially enhance its diagnosis and treatment (photo by Tyler Irving)

Researchers in the Faculty of Applied Science & Engineering have built a set of magnetic “tweezers” that can position a nano-scale bead inside a human cell in three dimensions with unprecedented precision. The nano-bot has already been used to study the properties of cancer cells, and could point the way toward enhanced diagnosis and treatment.

Professor Yu Sun and his team have been building robots that can manipulate individual cells for two decades. Their creations have the ability to manipulate and measure single cells – useful in procedures such as in vitro fertilization and personalized medicine. Their latest study, published today in Science Robotics, takes the technology one step further.

“So far, our robot has been exploring outside a building, touching the brick wall, and trying to figure out what’s going on inside,” says Sun. “We wanted to deploy a robot in the building and probe all the rooms and structures.”

The team has created robotic systems that can manipulate sub-cellular structures inside electron microscopes, but that requires freeze-drying the cells and cutting them into tiny slices. To probe live cells, other teams have used techniques such as lasers or acoustics.

“Optical tweezers – using lasers to probe cells – is a popular approach,” says Xian Wang, the PhD candidate who conducted the research. The technology was honoured with the 2018 Nobel Prize in Physics, but Wang says the force that it can generate is not large enough for the mechanical manipulation and measurement he wanted to do.

“You can try to increase the power to generate higher force, but you run the risk of damaging the sub-cellular components you’re trying to measure,” says Wang.

The system Wang designed uses six magnetic coils placed in different planes around a microscope coverslip seeded with live cancer cells. A magnetic iron bead about 700 nanometres in diameter – about 100 times smaller than the thickness of a human hair – is placed on the coverslip, where the cancer cells easily take it up inside their membranes.

Once the bead is inside, Wang controls its position using real-time feedback from confocal microscopy imaging. He uses a computer-controlled algorithm to vary the electrical current through each of the coils, shaping the magnetic field in three dimensions and coaxing the bead into any desired position within the cell. Wang’s system uses six magnetic coils (pictured) to control the position of a microscopic iron bead within the device. The bead is small enough to enter human cells and can be positioned with unprecedented accuracy (photo by Tyler Irving)

“We can control the position to within a couple of hundred nanometres down the Brownian motion limit,” says Wang. “We can exert forces an order of magnitude higher than would be possible with lasers.”

In collaboration with Dr. Helen McNeill and Yonit Tsatskis at Mount Sinai Hospital and Dr. Sevan Hopyan at The Hospital for Sick Children (SickKids), the team used their robotic system to study early-stage and later-stage bladder cancer cells.

Previous studies on cell nuclei required their extraction from cells. Wang and Sun measured cell nuclei in intact cells without the need to break apart the cell membrane or cytoskeleton. They were able to show that the nucleus is not equally stiff in all directions.

“It’s a bit like a football in shape – mechanically, it’s stiffer along one axis than the other,” says Sun. “We wouldn’t have known that without this new technique.”

They were also able to measure exactly how much stiffer the nucleus got when prodded repeatedly, and determine which cell protein or proteins may play a role in controlling this response. This knowledge could point the way toward new methods of diagnosing cancer.

“We know that in the later-stage cells, the stiffening response is not as strong,” says Wang. “In situations where early-stage cancer cells and later-stage cells don’t look very different morphologically, this provides another way of telling them apart.”

According to Sun, the research could go even further.

“You could imagine bringing in whole swarms of these nano-bots, and using them to either starve a tumour by blocking the blood vessels into the tumour, or destroy it directly via mechanical ablation,” says Sun. “This would offer a way to treat cancers that are resistant to chemotherapy, radiotherapy and immunotherapy.”

These applications are still a long way from clinical deployment, but Sun and his team are excited about this research direction. They are already in process of early animal experiments with Dr. Xi Huang at SickKids.

“It’s not quite Fantastic Voyage yet,” he says, referring to the 1966 science fiction film. “But we have achieved unprecedented accuracy in position and force control. That’s a big part of what we need to get there, so stay tuned!”