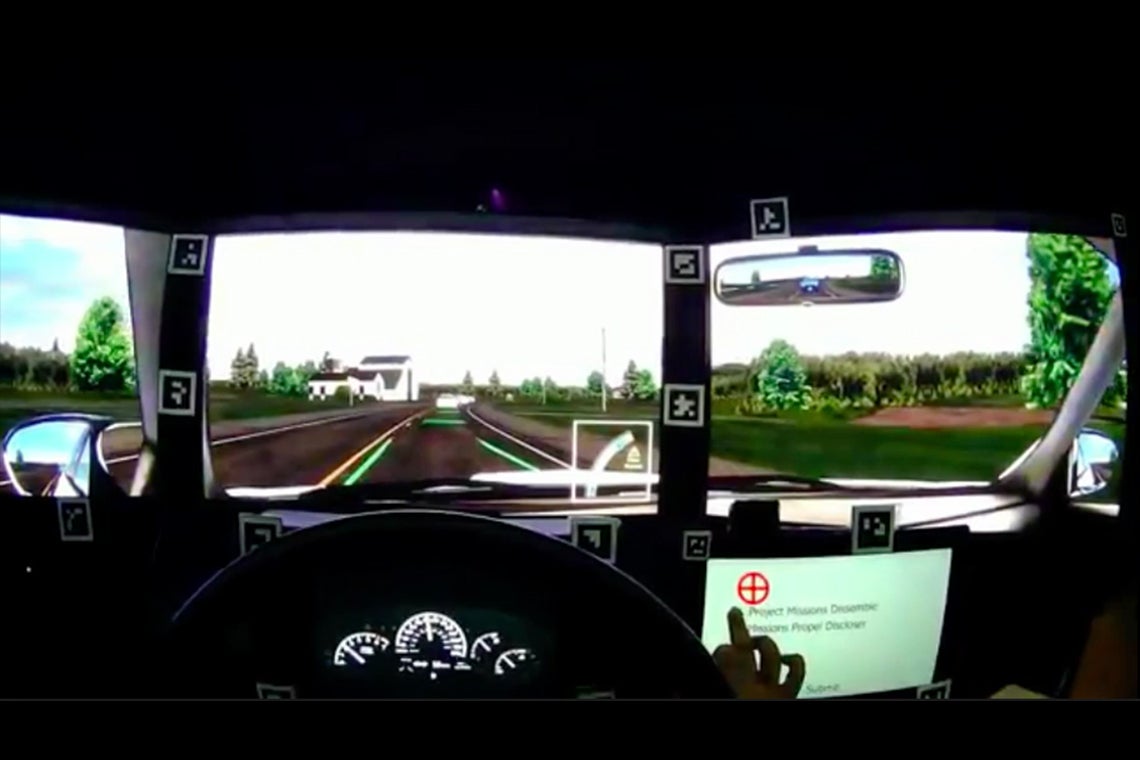 As cars keep getting smarter, automation is taking many tricky tasks –  from reversing to parallel parking –  out of drivers’ hands.

Now, a University of Toronto study is underscoring the importance of drivers keeping their eyes on the road – even when they are in an automated vehicle, or AV.

Using an AV driving simulator and eye-tracking equipment, Birsen Donmez, a professor in the department of mechanical and industrial engineering in the Faculty of Applied Science & Engineering, and her team studied two types of in-vehicle displays and their effects on the driving behaviours of 48 participants.

The findings, published recently in the journal Accident Analysis & Prevention, revealed that drivers can become over-reliant on AV technology. This was especially true with a type of in-vehicle display the team dubbed “takeover request and automation capability,” or TORAC.

A “takeover request” asks the driver to take vehicle control when automation is not able to handle a situation, while “automation capability” indicates how close the automation is to its limit.

“Drivers find themselves in situations where, although they are not actively driving, they are still part of the driving task – they must be monitoring the vehicle and step in if the vehicle fails,” says Donmez.

“And these vehicles fail – it’s just guaranteed. The technology on the market right now is not mature enough to the point where we can just let the car drive and we go to sleep. We are not at that stage yet.”

Tesla’s AV system, for example, warns drivers every 30 seconds or less when their hands aren’t detected on the wheel. This prompt can support driver engagement, but when the automation fails, driver attention and anticipation can determine whether a traffic accident occurs.

“Even though cars are advertised right now as self-driving, they are still just level two, or partially automated,” saus Dengbo He, a post-doctoral researcher and lead author of the study. “The driver should not rely on these types of vehicle automation.”

In one of the team’s driving scenarios, the participants were given a non-driving, self-paced task meant to mimic common distractions such as reading text messages, while takeover prompts and automation capability information were turned on.

“Their monitoring of the road went way down compared to the condition where these features were turned off,” says Donmez. “Automated vehicles and takeover requests can give people a false sense of security, especially if they work most of the time. People are going to end up looking away and doing something non-driving related.”

STTORAC provides drivers with ongoing information about their surrounding driving environment, including highlighting potential traffic conflicts on the road. This type of display led to the shortest reaction time in scenarios where drivers had to take control of the vehicle, showing a significant improvement from both the TORAC and the no-display conditions.

“When you’re not driving and aren’t engaged, it’s easy to lose focus. Adding information on surrounding traffic kept drivers better engaged in monitoring and anticipating traffic conflicts,” says He, adding that the key for designers of next-generation AVs will be to ensure systems are designed to keep drivers attentive.

“Drivers should not be distracted, at least at this stage.”

Donmez’s team will next look at the effects of non-driving behaviours on drowsiness while operating an AV.

“If someone isn’t engaged in a non-driving task and is just monitoring the road, they can be more likely to fall into states of drowsiness, which is even more dangerous than being distracted.”