'A failed presidency': Best-selling author of 'Fire and Fury' on Donald Trump 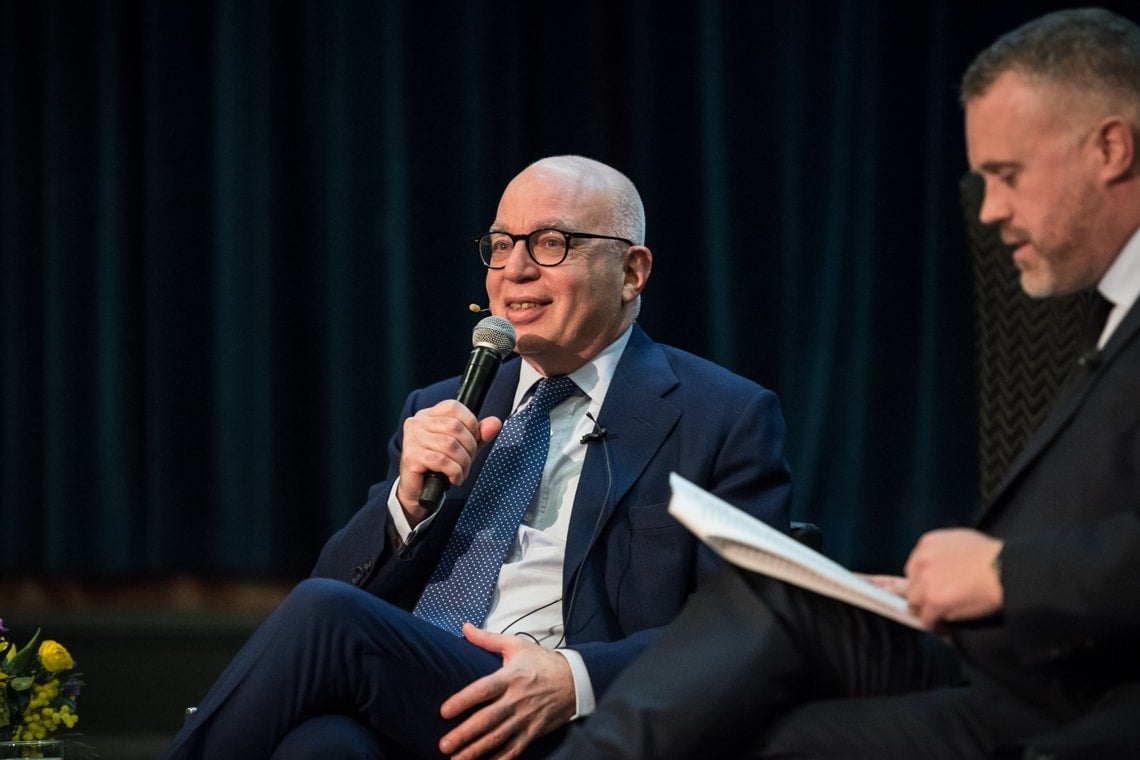 From left to right, Michael Wolff talks at U of T in a discussion moderated by School of Public Policy & Governance Director Peter Loewen (photos by Lisa Sakulensky)

Michael Wolff’s exposé Fire and Fury paints a picture of a White House in turmoil, and on Wednesday the bestselling author was at the University of Toronto unpacking a chaotic first 100 days of a president who thrives on conflict.

Speaking to a packed crowd at Convocation Hall, Wolff recalled a moment when Donald Trump was still on the campaign trail.

“I asked him, what’s your goal here?” Wolff said. “He said in a very straightforward way, ‘to be the most famous man on Earth.'”

Over the course of an hour, Wolff painted a picture of a man who rules the White House like a reality TV show – and has achieved his goal.

“His success at holding everyone’s attention in this job goes not to politics but to reality television,” Wolff said. “The nature of reality television is conflict. You have to manufacture and produce and sustain conflict in every show.

“The more conflict you have the more successful you are. Essentially, that’s the way he’s run this presidency. Every tweet is designed to produce conflict.” 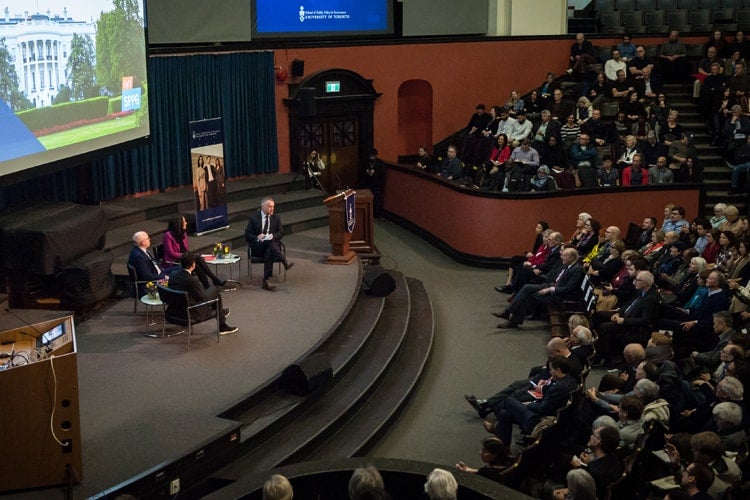 A crowd at Convocation Hall listens to Michael Wolff

Wolff was speaking at U of T as part of the David Peterson Public Leadership Lecture Series, organized by the School of Public Policy & Governance. The talk, titled “Facts Stranger Than Fiction: Michael Wolff on Reporting From Inside the Trump White House,” was moderated by Peter Loewen, associate professor of political science and director of SPPG.

A columnist for Vanity Fair and the New Yorker and a biographer of Rupert Murdoch, Wolff worked his way into the White House by doing a piece on Steve Bannon. When he then raised with Bannon the idea of documenting Trump’s first 100 days, Bannon arranged a meeting with Trump.

“I said to Trump, ‘I’d like to come into the White House as an observer,’ and Trump thought I was asking for a job – deputy assistant observer,” Wolff joked, drawing laughs from the audience.

“I said, ‘I’d like to write a book,’ and you could just see his face deflate, that this was possibly the most uninteresting proposition that had ever been made to him. I said it would be great because you know you have to have a book. And he said, ‘OK, yeah, sure, whatever.’”

Wolff described entering the White House as a visitor every day, waiting to meet with staff who would inevitably break their appointments with him. Eventually he became familiar, a fixture on a West Wing couch. That’s when people began talking to him, Wolff said.

As the White House began unraveling, people turned on each other – and turned to him, to unload.

“In all the time I was there, I think I never asked anyone a single question except maybe, ‘How’s it going?’ I became a kind of black hole where people just began to narrate their experiences.” 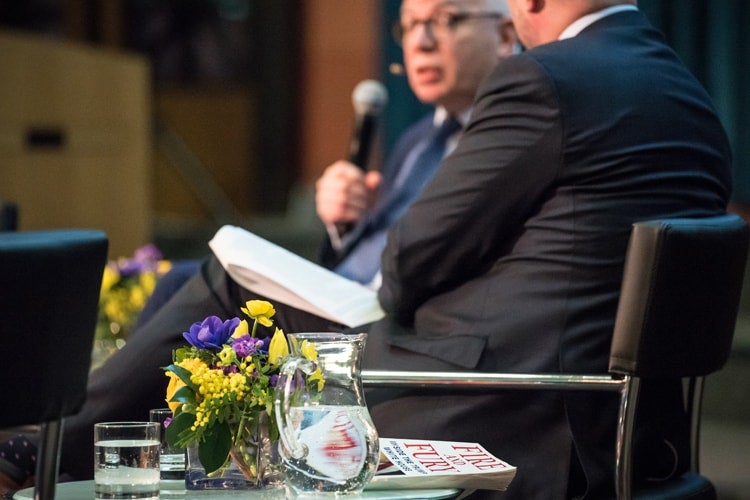 Michael Wolff's 'Fire and Fury' uncovers the behaviour of U.S. President Donald Trump and the staff of his 2016 presidential campaign and White House. The book's title refers to a quote by Trump about the conflict with North Korea

What struck him, Wolff said, was how few people really knew Trump before the election. Even Bannon told him that he didn’t think he had spoken to Trump for more than 10 minutes on the campaign trail.

“He’s a different kind of idiot because he’s the president of the United States…He’s an idiot you can’t forget about.”

Althia Raj, Ottawa Bureau Chief for Huffington Post Canada, and Joseph Heath, professor of philosophy, public policy and ethics, asked Wolff to talk about his reporting and criticism of the book’s credibility and Wolff’s recreation of scenes.

Wolff said a chapter in the book detailing Bannon’s rants came straight from a tape recorder – he was recording the conversation.

“I don’t think I filled in anything,” he said. “Everything was something I witnessed, or something somebody else who I had reason to trust witnessed.”

When asked if Trump will survive to the end of his term, Wolff said, “I don’t think so.”

“I think it’s a failed presidency. I think the contribution of my book is to open up the discussion of the nature of the failure. He, literally, as everyone around him understands, can’t do his job. And he’s not going to rise to the occasion of doing his job.” 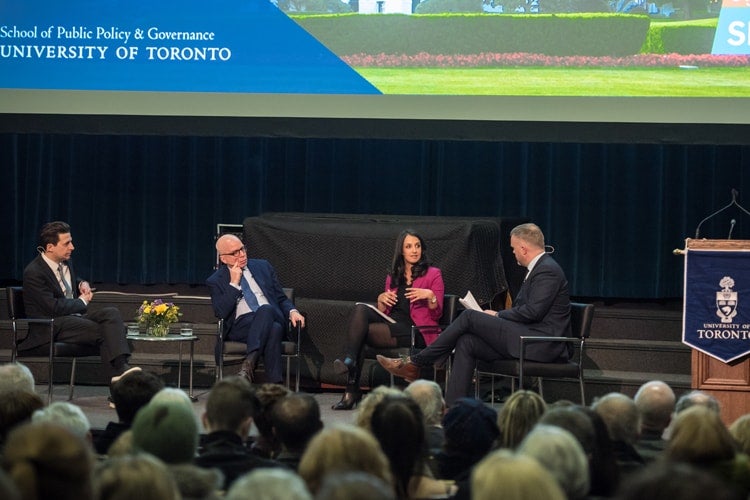