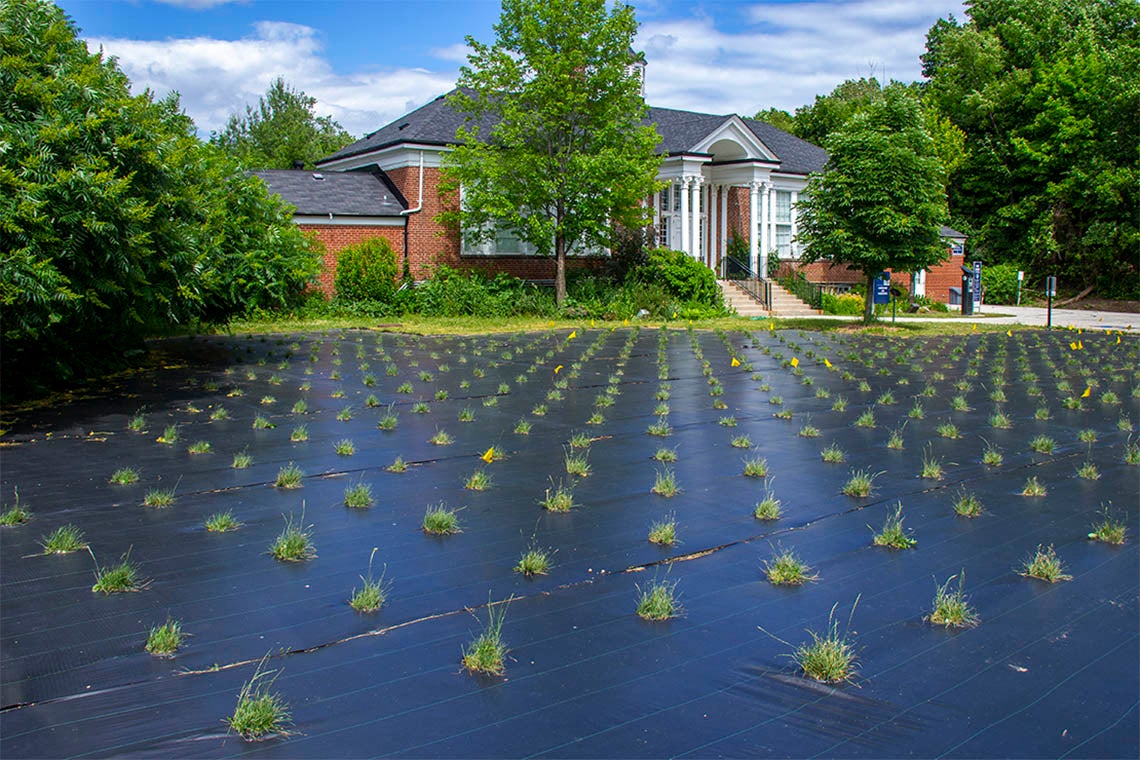 Hundreds of white clover plants dot the lawn of Alumni House as part of an international experiment to study how plants adapt to location and climate change. (photo by Drew Lesiuczok)

An unusual garden at U of T Mississauga is drawing inquiries from curious passers-by. The green lawn between Alumni House and Mississauga Road has been covered with black landscape fabric and dotted with more than 450 white clover plants.

The plants originate from seeds collected from more than 100 locations across Europe and North America, and are part of a pioneering study to test the adaptation of white clover in both its native and introduced ranges. Identical gardens will be established at partner institutions in Louisiana, France and Sweden.

The project is led by PhD student Lucas Albano and co-investigator Marc Johnson, associate professor of biology and director of the Centre for Urban Environments. The evolutionary ecologists will study how the invasive white clover plants have evolved in different locations, and how the plants are adapting to climate change in the present.

“It’s really unusual that we can test this way,” says Johnson. “There are very few experiments that empirically demonstrate that the plants can adapt to climate change.”

White clover thrives around the world, but is a relatively recent newcomer to North America. The invasive plant was introduced, likely as livestock fodder, by European settlers about 500 years ago.

“Clover is a model species,” says Albano. “The results of this common garden study could allow us potentially to bridge to other species and apply our results more broadly across the plant world.”

Albano and Johnson will build on previous research from the 1950s that found white clover plants in Europe had evolved adaptive traits specific to location and climate. One such adaptation is cyanogenesis, a potent chemical defence system found only in warm climate clovers that deters herbaceous pests from eating the leaves. Clover that has adapted to colder locations does not carry the trait. 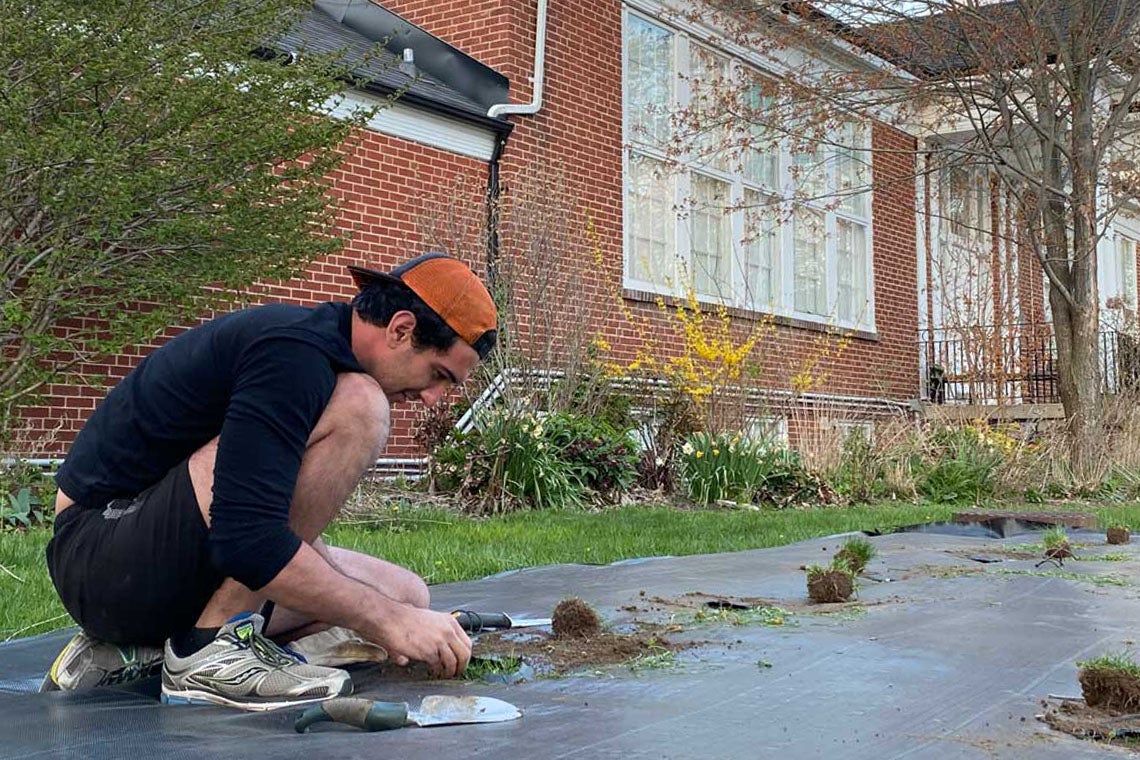 Evolutionary ecologist Lucas Albano says the study results could provide important insights into how other plants might fare as the climate warms. (Photo courtesy Lucas Albano)

Over the next 18 months, Albano and Johnson will track plant growth, flower and seed production and chemical defense traits displayed by plants.

“Two summers gives the plants a long time to adjust  and thrive – or not thrive – under natural conditions,” Albano says. “We will test each plant for whether it’s producing hydrogen cyanide or not, which will allow us to ask more questions about what’s causing them to be more or less successful.”

The researchers hope to gain a better understanding of whether adaptive evolution in plants can withstand the effects of climate change, and whether evolution helps the plants succeed in new environments.

“We would expect to see that plants from nearby (Ontario) locations, like Acton or Cayuga, would do best because they would be highly adapted to the climate closest to UTM, and that a plant grown further from its adapted environment would be less successful,” says Albano.

If plants from a more southerly location such as Ohio do well in the U of T Mississauga garden, he says, it could indicate how plants might adapt to a warming climate in the future.

Albano is also interested in how European plants will fare when compared to clovers adapted to North American growing conditions.

“And what happens when we transport North American clovers back to Europe?”

Collaborating institutions include the University of Louisiana at Lafayette, Le Centre National de la Recherche Scientifique and Sveriges lantbruksuniversitet (Swedish Agricultural University) in Sweden. Funding for the study is provided by the National Sciences and Engineering Research Council and the Canada Research Chairs program.