Evolution of a killer: U of T study traces deadly fungus affecting bats 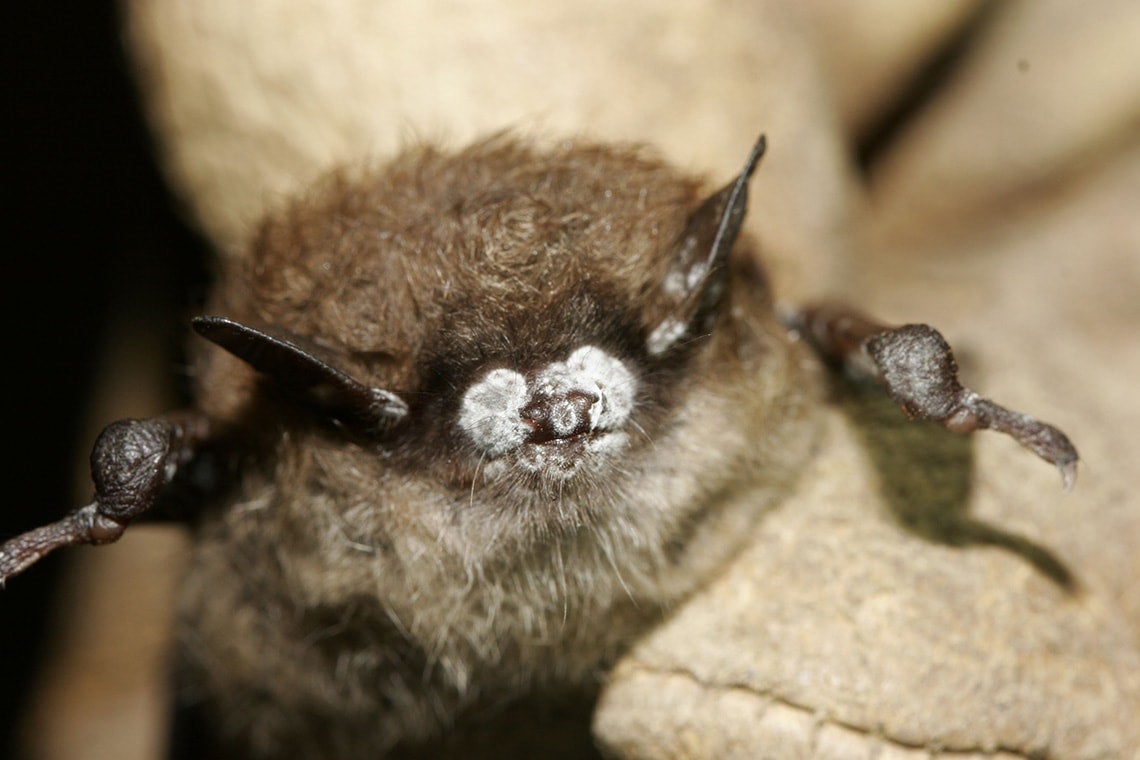 About seven million bats have died of white-nose syndrome in the past decade (photo courtesy Ryan von Linden, New York Department of Environmental Conservation via Flickr)

A new study from U of T Mississauga is shining a light on genetic changes happening in the darkest of places – bat caves.

First discovered in 2006, Pseudogymnoascus destructans is a fungus that has wreaked havoc on eastern North American bat populations. The fungus, which is thought to have been accidentally introduced from Europe, has taken hold in caves along eastern Canada and the United States, where it has thrived in a perfect ecosystem of cold temperatures and unsuspecting hosts. The fungus causes white-nose syndrome, so named because it covers the snouts and wing membranes of hibernating bats with a fuzzy white growth.

Bats who contract the fungus have trouble flying and hunting, and eventually starve. About seven million bats have died of the syndrome in the past decade.

Graduate student Jigar Trivedi has spent the past two years studying the fungus, working with U of T Mississauga's Linda Kohn, a professor of biology, and James Anderson, a professor of cell & systems biology. Trivedi’s findings, recently published in the American Society for Microbiology's journal mSphere, reveal new information about how the fungus reproduces and evolves over time.

“White-nose syndrome attacks the immune system of the bats,” Trivedi says. “They hibernate together in close quarters where the fungus is easily transferred and their immunity is low – the fungus acts as an opportunistic pathogen.” The North American fungus is unique because there is only one strain.

“There are many strains of the fungus in Europe, where bats appear to be less affected, but in North America, only one strain was introduced and it hasn’t yet combined with a different strain. It has been reproducing asexually by creating clones of itself,” says Trivedi (right).

“Previous studies didn’t tell us if the fungus was evolving or not,” he says. “We wanted to see how it was evolving, and how much genetic diversity the fungus has accumulated.”

“This is a cold-loving fungus,” Trivedi says. “We weren’t sure we could grow it in the lab.”

After about a month, Trivedi extracted DNA from the samples to create complete genetic sequences of the samples.

“We see that this fungus is slowly and steadily accumulating genetic variation through spontaneous mutations that have occurred over the last 10 years,” he says.

Trivedi’s findings have generated a lot of interest, with more than 3,000 views of the study in the first two weeks of publication and more than 15,000 posts on social media.

Trivedi warns that accidental introduction of a new strain of the fungus could cause additional evolution and spell disaster for bats that are already on the brink of extinction. He notes that the big brown bat has shown some resistance to the fungus, and hopes that the new data can provide further insight into how the pathogen and the host might evolve.

“We can look at what has happened in Europe over hundreds of years and see that it’s possible that the host and pathogen have co-evolved,” he says. “If the North American fungus has a chance to become more genetically diverse, it can cause even more trouble for the bats. You will see how natural selection acts – in favour of the bats or in favour of the fungus.”

“There are strict measures for biosecurity that we should take to prevent this,” Trivedi says.

He recommends that those intending to visit the caves take measures to quarantine clothes and gear.

“It’s like having the flu and being careful to stay away from children and others with low immunity,” he says.