The English of a Millennium Ago: U of T compiles "Dictionary of Old English"

Now at “H,” the Centre for Medieval Studies' dictionary is close to defining every word from the language’s earliest days

Just when you think you know your own language, along comes a hellwyrgen.

Rob Getz ran across the creature in a 12th-century manuscript, where it was pushing some thieves suffering torments in hell into a pit of boiling tar.

As an interim co-editor of the Dictionary of Old English, a U of T project that aims to map all of the roughly 35,000 words from the earliest form of the language, Getz is no stranger to challenging words. But this one was a stretch.

Not so much the first part which is obvious – hell. But the second part looked like it might be derived directly from the verb wyrgan or wyrigan meaning “to curse, revile, condemn.” It’s actually identical to the second part of a noun used to describe the mother of the monster Grendel in the Anglo-Saxon epic Beowulf.

So in the end, a hellwyrgen turns out to be something like a monstrous female creature from hell, or hell-hag.

Read about the dictionary at CBC News

Old English, which arose from the Germanic language of the Anglo-Saxon settlers who came to Britain from northern Europe in the fifth and sixth centuries, is the direct ancestor of our modern tongue.

It has bequeathed us dozens of common words – from “hound” (hund) to “house” (hūs). But the language has changed so much over the centuries that anyone reading an Old English text such as Beowulf would not recognize most of the words. Even the alphabet was different with fewer letters, a different letter for “w,” the wonderful “eth” (ð) and the runic “thorn” (þ) standing in for “th.”

Scholars at the Faculty of Arts & Science's Centre for Medieval Studies have been working on a comprehensive dictionary of the tongue since the 1970s, and with the release of “h” this year, they have now published definitions for more than half the words.

Computers have made things somewhat quicker, and a digitized corpus, consisting of at least one copy of every known text in Old English (from poems to royal records), means that they can now search more easily for words and citations. But scholars still have to organize the words and define their meaning.

Here, there is no algorithm to aid them – just countless dictionaries, Latin sources and the lexicographer’s best intuition.

Some words appear only once in the corpus, while others, such as the Old English for “hand,” “head” and “heart” are both common and complicated. The 39-page entry for heorte (“heart”) contains more than a dozen major meanings, including the seat of love, of courage and even of the intellectual faculties.

The section on the letter “h” was particularly difficult, and not just because it begins with more words than any other except “s” and “f.” It contains key verbs and pronouns, as well as the interrogatives – who, what, when, where and why – all of which began with hw in Old English. The interrogatives “are fairly uncomplicated in terms of their meaning,” says Stephen Pelle, an interim co-editor of the dictionary – but they “can be very complicated grammatically.”

Old English portrays another world, a world where rain might be described as “heaven’s showers” (heofonscur), but the language is also a window into the philosophical, moral, legal and linguistic roots of our own.

If we’re to understand those roots, we need to know the language the people spoke, says Getz. To that end, the lexicographers are trying to be as comprehensive as possible, picking up words earlier dictionary makers missed.

“If we’re doing our job right,” says Pelle, “we should be able to catch just about every word that survives in an old English text.” 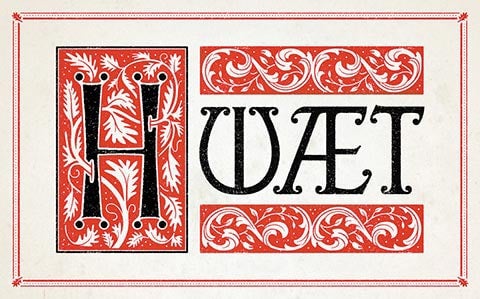 Hring – ring. A lot of words that today start with consonants like "r," "l" and "n" began in Old English with h. Thus hleahtor (“laughter”), hnutu (“nut”) and hnappian (“to nap”). (The h was pronounced, at least in the early Old English period so hleahtor would sound similar to the modern word laughter with a huff of breath at the beginning.)

Hūs – “house,” “building” and, in some contexts, “brothel.” The Anglo-Saxons loved compound words and hūs figures in more than 100 of them, including ealu-hūs (“ale house”), gyst-hūs (“guest house”) and pleg-hūs (“theatre” or “playhouse”).

Heoloþ-helm – a helmet that makes the wearer invisible. A demon wearing one of these figures in a medieval retelling of Genesis. He sneaks into Paradise and tries to trick Adam and Eve into eating the forbidden fruit.

Hunig-smæc – It sounds like a breakfast cereal, and it certainly has a sweet side. It comes from the Old English for “honey” and “smack,” or “taste” so it means “taste or flavour of honey.”

Hærfest-handfull – “harvest handful” or the grain given a labourer as his due during harvest.

Hǣmed – marriage but also cohabitation, adultery and even “the intercourse of animals.”

Hwæt – The most famous hard-to-define word in old English, hwæt opens the great Anglo-Saxon epic Beowulf. As a pronoun, it’s well understood. As a particle or interjection, as in Beowulf, not so much. Seamus Heaney, the great Irish poet who translated the poem to acclaim in 2000, rendered it simply as “so.” Others have gone for “lo,” “hark” and “behold.” The Dictionary of Old English’s answer is: It depends. It might mean: “now,” “so,” “listen,” “why,” “now look,” “indeed,” etc..., but it depends on the context. The complete definition covers 26 pages.

This story is republished from U of T Magazine

See more stories at U of T Magazine