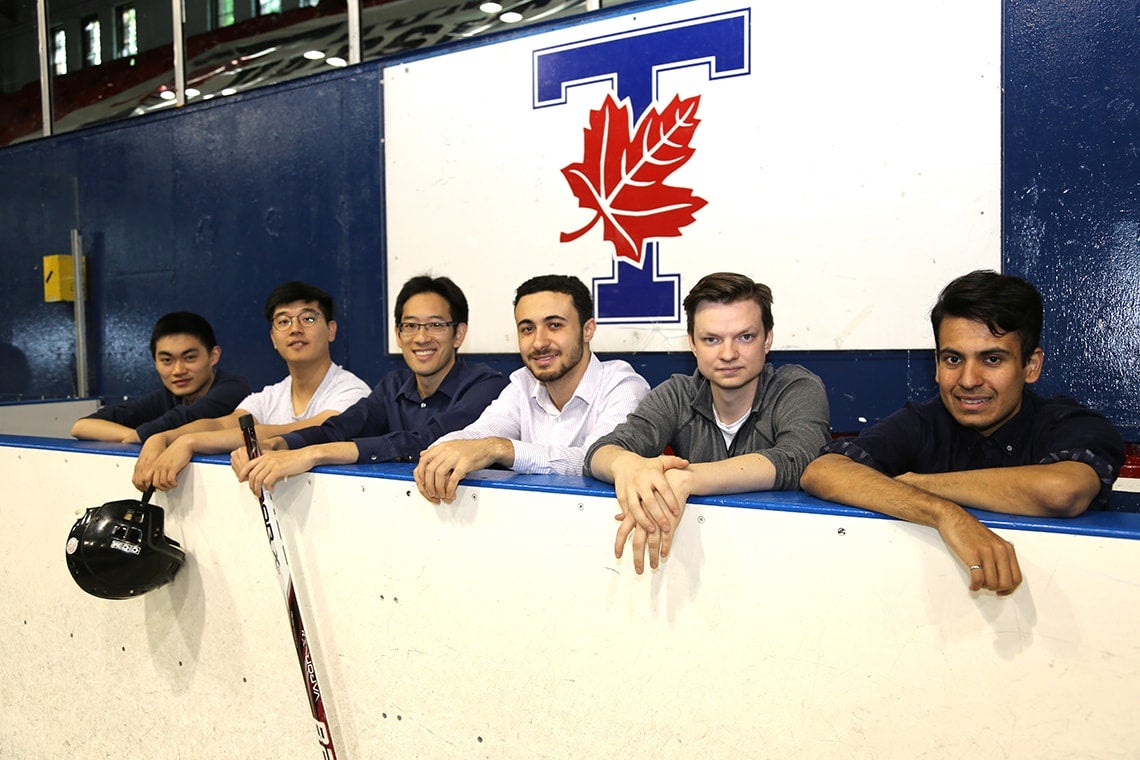 “If the Golden Knights want to use our team for some consulting, we’d be OK with that too”

While hockey fans wait anxiously for draft picks for the NHL’s new expansion team, the Las Vegas Golden Knights, Industrial Engineering Associate Professor Timothy Chan and his students may already have an idea of who made the cut.

Chan’s research group has developed and launched the NHL Expansion Draft Optimizer, a web-based modelling tool that takes a deep dive into draft data, analyzing more than 10²ºº possibilities to predict what the 2017-2018 Golden Knights roster may look like. Golden Knights' general manager George McPhee makes the draft announcement on June 21.

“We’re all big sports fans, and we were speculating about the expansion draft,” said Chan, who worked with a team of five U of T Engineering students, including undergraduates and graduate students, over the course of a month to develop the site in time for the draft. “Knowing that the announcement was coming up, we thought this website would be a great tool to show operations research in action.”

Using the optimization model the group designed, the site determines who the Golden Knights should pick from the NHL’s 30 teams to maximize the “value” of the roster, taking into consideration the draft rules. The optimizer selects:

It also allows hockey fans to fine-tune the results to their liking and sports expertise, choosing which players to “protect” or which to “expose” to the draft, and adjusting the metrics for what they think would be most valuable for the team, such as optimizing based on a player’s on-ice performance or even by their EA Sports NHL 17 player rating. Fans can also get a sense of which players they could lose from their favourite team.

“This is bringing operations research (OR) out to the mainstream audience. Classically, OR is used very internally – a general audience may understand the concept of optimization, but they can’t explain what it is,” said PhD candidate Rafid Mahmood. “This NHL optimizer brings it to the forefront, and shows why OR is so valuable.”

Ben Potter, who is pursuing a master's degree, knew the optimization model they created was doing its job when he noticed a name that kept popping up in the media and in the optimizer.

“I don’t know a lot about the NHL, but one of the recurring results was [Chicago Blackhawks’] Trevor van Riemsdyk, and someone pointed out that there was speculation in the news that the Golden Knights were going to select him as part of a larger deal with Chicago.”

The website also highlights difficult situations teams may be facing in order to protect their star players. For example, the model indicates that the Pittsburgh Penguins’ starting goalie, Matt Murray, is slated to be exposed and chosen by Vegas, since the back-up goalie, Marc-Andre Fleury, has a no-trade clause in his contract.

“If the draft were held today, that’s very likely what would happen,” said Chan. “However, most pundits believe that Pittsburgh will somehow find a way to keep Murray via trades or a side deal with Vegas.”

After McPhee makes the big draft announcement, and the roster of the 31st NHL team is known, Chan’s research team plans to have a post-mortem to see how well the optimizer did in predicting the new Golden Knights' team. After that, they hope to find other applications for their model.

“The foundation that this was built can be applied to a lot of other problems that require on-demand optimization. It could be useful for anything from scheduling to fantasy sports,” said Chan. “Of course, in the short term, if the Golden Knights want to use our team for some consulting, we’d be OK with that too.”