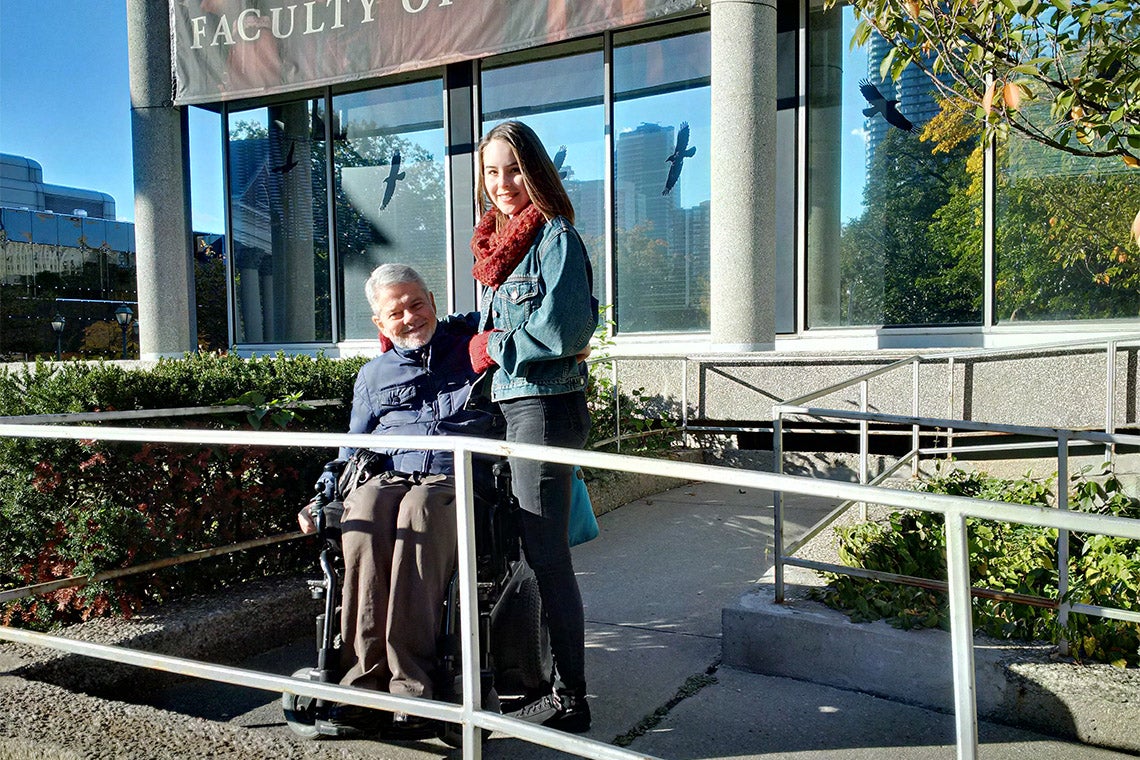 Ian Parker with his daughter Emily, a current U of T student, on the ramp he lobbied the university to build outside the Faculty of Music building (photo courtesy of Lisa Bendall)

When Ian Parker began studying music at the University of Toronto in the 1970s, he could be forgiven for thinking the campus was an obstacle course.

But by the time he graduated, Parker – who died on April 15 at age 74 – had helped make the university a much more welcoming place for people with mobility challenges like himself.

A music student who sustained a spinal cord injury in his 20s, Parker successfully lobbied U of T to build a wheelchair ramp outside the Faculty of Music building – a ramp he would later reuse to attend the vocal performances of his daughter Emily Parker, a current U of T student.

He also co-founded a group of students and faculty who persuaded the university administration to expand accessibility infrastructure and services. 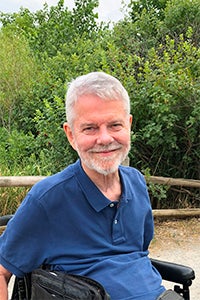 “I think that for Ian, who routinely looked for solutions to any obstacles he encountered, it would have been a no-brainer to form a committee that would work towards increased accessibility on campus,” says Lisa Bendall, his wife and an alumna of what is now U of T Mississauga.

Parker had a love of music that went back to his childhood, when he listened to his mom play Chopin on the piano while he sat in rapt attention on the floor by the pedals. At the Royal Conservatory of Music, he switched from trumpet and singing to piano, and sailed through the requirements of an ARCT (associate diploma) to become a music teacher.

In his late-20s, he broke his neck in a diving accident at Lake Scugog, northwest of Oshawa, Ont., resulting in a degree of paralysis in his arms and legs.

His passion for music and the support of family and friends helped him adapt to the life-changing injury.

“We all have this marvellous ability to adjust to new circumstances,” he said, sharing his story in a 1981 report for a parliamentary committee that focused on barriers facing people with disabilities.

Even before completing rehabilitation in hospital, he enrolled as a part-time music student at U of T. Parker started his bachelor’s degree when campus accessibility services and infrastructure were in their infancy, so he depended on a team of students to carry him and his wheelchair up and down stairs.

“He was using a manual chair at the time – and, as horribly undignified as this process must have been, it would have been simply impossible if he was using the power wheelchair that he eventually switched to,” Bendall says.

Parker gathered support for the installation of a ramp outside the music building and co-founded a group of students and faculty called Access U of T, which pushed for change.

In a two-part documentary on the Disability Network, a public affairs program produced by CBC Toronto, Parker said the ramp “started the ball rolling for U of T being accessible, but the real thing was getting an organized group of disabled people together.”

About a year after Access U of T formed, U of T’s campus weekly The Varsity reported that university administrators were consulting the group on building plans and renovations.

“Although a relative newcomer to the ranks of recognized campus groups, Access U of T has already established itself as an energetic and effective organization,” the paper said.

Katherine Harman, then-president of Access U of T, who later taught physiotherapy at the University of Ottawa and Dalhousie University, described the creative ways in which the group put a spotlight on barriers facing students with mobility challenges. She photographed fellow members of the group who used wheelchairs posing in front of stairs they couldn’t climb – even entering buildings through kitchens or loading docks.

Access U of T was created before the International Year of Disabled Persons, in 1981. The previous fall, the university hired its first “coordinator of services for the disabled,” a precursor to the current director of accessibility services.

Eileen Barbeau, a U of T graduate who worked at the International Student Centre, was hired on a 10-month contract. She was initially put in charge of recruiting volunteers to aid people with disabilities by reading aloud, assisting with research or helping them get to classes. Through the decades, the office grew into a division of student life that has 32 employees and more than 5,000 registered students at the St. George campus alone.

Barbeau says Parker was an invaluable resource during her early years on the job. “He was one of the first people I met and talked to,” she says. “He was his own Rolodex of information of all sorts.”

Working alongside Access U of T and the undergraduate students’ union, Barbeau’s office held events to raise awareness about the needs of students with disabilities. One highlight was an exhibition wheelchair basketball match between the Varsity Blues and a team of athletes with disabilities (Although she’s forgotten the score, Barbeau’s recollection is that the Blues were “clobbered.”)

Before graduating in 1987, Parker worked as the assistant provincial co-ordinator for the International Year of Disabled Persons and helped create an award-winning commercial with the slogan, “Label us able.”

“Peoples’ ideas are gradually changing, and direct funding is gradually dawning on a growing number of people as a really effective solution for the future to give people the control over their own situations,” he told the Disability Network.

Parker worked at Centre for Independent Living in Toronto, first as a manager of the direct funding program and then a consultant, until his retirement in 2018. Although he felt much progress had been made in the way of physical infrastructure, including curb cuts and accessible parking, he continued to see examples of discrimination and inequity in services and programs.

“People’s attitudes, in particular, are in many ways more difficult to change than a sidewalk curb,” agrees Bendall.

At home, Parker nurtured his daughter Emily’s passion for music, helping her practise piano, taking her to choir concerts and sharing recordings. Their bond grew even stronger after she started studying music at t U of T, engaging her dad in “in-depth (and highly nerdy) chats.”

She is on track to graduate this spring.

Growing up, she says she pitied her friends whose fathers didn’t have disabilities “because they were missing out on the unlimited wheelchair rides that never failed to amuse me.”

In addition to her father’s love and knowledge of music, Emily says she admired her dad’s open-mindedness and resilience.

“I learned from it all – values such as empathy and strength, and life lessons, including that it is possible to achieve any dream.”