On eggshells: What the world's oldest eggs reveal about dinosaur evolution 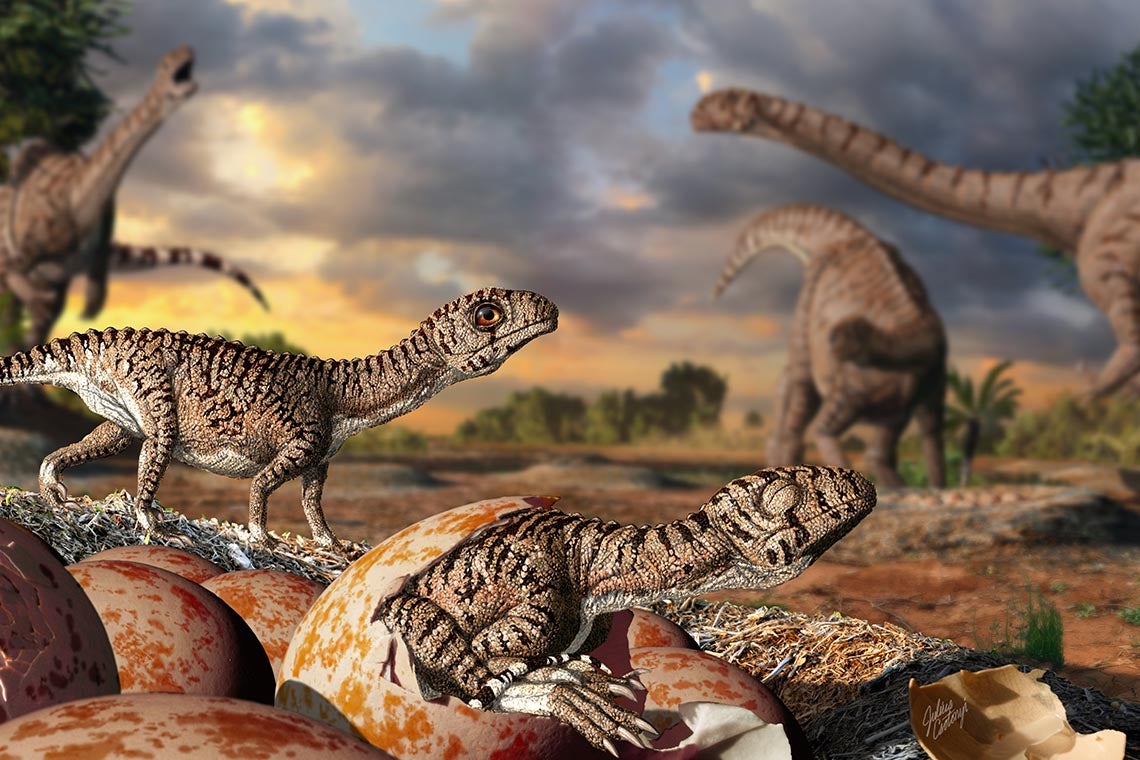 A study of the world’s earliest known dinosaur eggs reveals new information about the evolution of dinosaur reproduction.

An international team of researchers, led by Robert Reisz of the department of biology at the University of Toronto Mississauga, studied the fossilized remains of eggs and eggshells discovered at sites in Argentina, China and South Africa – widely separated regions of the supercontinent Pangea.

At 195 million years old, they are the earliest known eggs in the fossil record, and they were all laid by stem sauropods – long-necked herbivores that ranged in size from four to eight metres in length and were the most common and widely spread dinosaurs of their time.

Reisz is puzzled by the fact that “reptile and mammal precursors appear as skeletons in the fossil record starting 316 million years ago, yet we know nothing of their eggs and eggshells until 120 million years later. It’s a great mystery that eggs suddenly show up at this point, but not earlier.”

According to Koen Stein, a post-doctoral researcher at Vrije Universiteit Brussel in Belgium and lead author of the project, the eggs represent a significant step in the evolution of dinosaur reproduction. Spherical, and about the size of a goose egg, these dinosaur eggshells were paper-thin and brittle, much thinner than similar-sized eggs of living birds. “We know that these early eggs had hard shells because during fossilization they cracked and broke, but the shell pieces retained their original curvature,” Reisz said. (A Diane Scott photo of fossilized Massospondylus eggs and embryos is at left.)

Members of the team, including Edina Prondvai and Jean-Marc Baele, analyzed shell thickness, membrane, mineral content and distribution of pores, looking for clues about why these early eggs might have developed hard shells.

The results of the study show that hard-shelled eggs evolved early in dinosaur evolution, with thickening occurring independently in several groups, but a few million years later other reptiles also developed hard-shelled eggs. One possibility is that hard and eventually thicker shells may have evolved to shield fetal dinosaurs and other reptiles from predators.

“The hard shells would protect the embryos from invertebrates that could burrow into the buried egg nests and destroy them,” Reisz said.

Reisz added that the study raises interesting questions for future investigation. “For example, we would like to understand why dinosaurs and their avian descendants never developed viviparity (live birth) and continued to rely on egg laying, while non dinosaurian reptiles and mammals, including ancient aquatic reptiles, succeeded in evolving this more advanced reproductive strategy.”

The study is co-authored by Reisz, Stein, Prondvai (Universiteit Gent), Timothy Huang (Jilin University), Jean-Marc Baele (Université de Mons) and P. Martin Sander (Universität Bonn) and is published in the journal Scientific Reports. It follows up on earlier research by Reisz, published in 2012, that examined nests of Massospondylus embryos in eggs discovered at nesting sites in South Africa, and a 2013 publication on dinosaur embryology in Lufengosaurus from China.