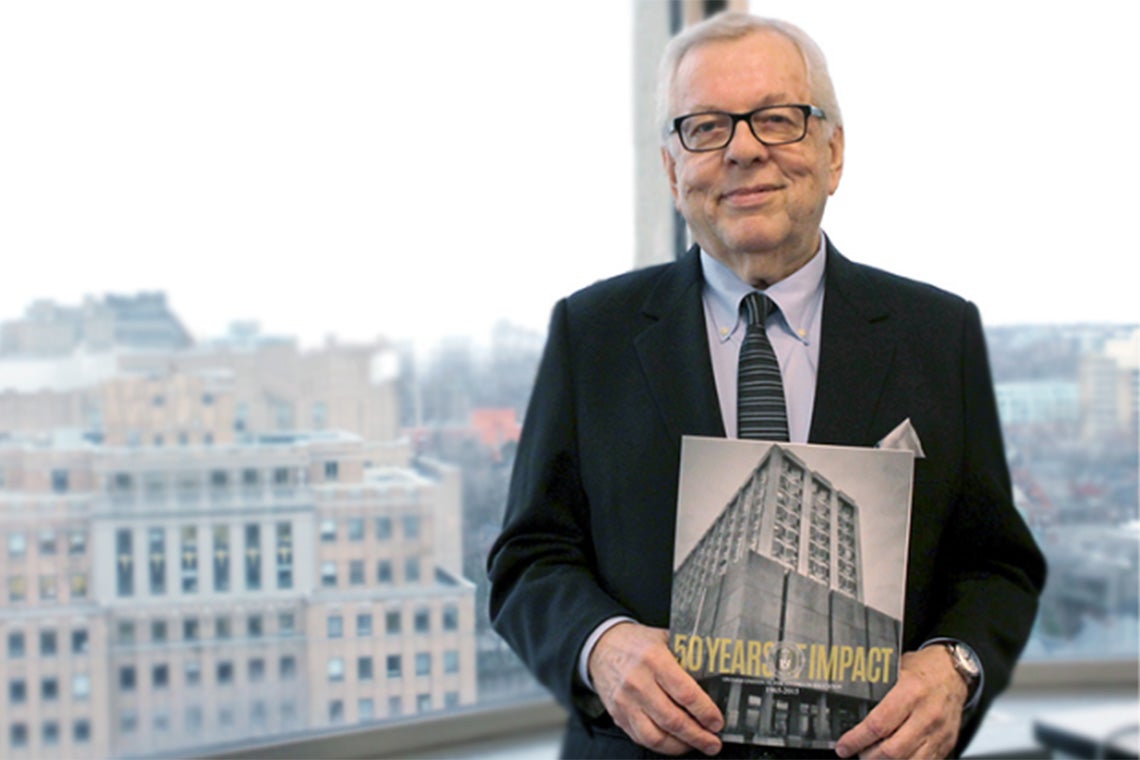 Professor Emeritus David Booth was an influential educator, prolific author, and staunch advocate for literacy who saw the value in all forms of reading, from classic literature to social media postings.

For more than 30 years, Booth taught and mentored undergraduate and graduate students at the University of Toronto's Faculty of Education and the Ontario Institute for Studies in Education, spreading his enthusiasm to generations of teachers.  His influence went far beyond U of T, as he wrote dozens of books and gave hundreds of presentations and speeches around the world.

Booth’s many books ranged from children’s stories to poetry anthologies to literacy guides for teachers and principals. Some were designed to help teachers integrate poetry or drama into the classroom, others dealt with how to get boys to read, and one was a handbook to help schools challenge censorship and book bans. His last book, What is a ‘Good’ Teacher, was written with Richard Coles and published in 2017.

But it was as an inspirational public speaker that he may have had the most impact. In his presentations, he was enthusiastic about teaching, unequivocally supported teachers, and showed he understood what they were up against, particularly on the subject of reading and literacy. His presentations at educational conferences were full of humour and understanding of teachers’ challenges, and showed deep empathy for the children they were teaching.

Booth’s lectures and talks were legendary, and teachers who heard him speak were inspired by his message. Sheilah Currie, a teacher who is the president and founder of the ReadUP Reading Clubs for children in east-central Toronto, said she first heard Booth speak when she was doing her teacher training. “He was funny, and empathetic…his talks were just very, very engaging.” David Booth, with his grandchildren Mara and E.J. (photo courtesy of Booth family)

Years later, Currie asked Booth to be on her board. He agreed because “he knew the problem with literacy, and how at-risk children often fall through the cracks.”

Currie said Booth was a highly effective “cheerleader” for her organization. “He was a much-loved member of our board, bringing lightness and laughter to our meetings, contributing great ideas, and making us all feel that we were doing noble work.”  Booth, she said, was “one of those rare people who lifts up others and makes them feel they are special when, in reality, I think it’s David who was special.”

Booth was effective at getting his message across because he loved teachers and wanted to help them get better at their jobs, said Glen Jones, the dean of OISE. “He really thought teaching was the best and most important profession,” and he offered practical advice that could be used in the classroom.

Jones said he has received dozens of notes from Booth’s former students since his death. “They wanted someone at OISE to know how David Booth had changed their lives.”

One of Booth’s areas of expertise was how to influence reluctant readers. In a 2010 paper, he noted that too many parents and teachers regard only novels, poetry and literary non-fiction as proper reading. “Many boys and men think that they are not readers because they don’t choose  one of those genres,” but that is a mistake, he wrote. Graphic novels, sports stories, and even video-game manuals or text on a screen are all legitimate forms of reading, he argued. The key is to make sure people think carefully about what they do read, and become “critical and discerning readers.”

David Hutchison, a former graduate student of Booth’s who is now a professor of educational studies at Brock University in St. Catharines, Ont., said Booth “really thought outside the box. He wasn’t dismissive of the emergence of the new social media and the different ways young people are communicating. He embraced that and found ways to integrate that into literacy development for them.”

Booth worked closely with academics who focused on literacy methods, and with classroom teachers with boots on the ground, said Dan Tobin, president of Stenhouse Publishers, which handled many of his books in the United States. “He really spanned that bridge between theory and practice as well as anybody I know.”

His books, Tobin said, were “practical, with innovative ideas and solid theory, but also so many practical suggestions.”

In one of Booth’s books, called Exploding the Reading, he got 1,000 students to study a 200-year-old folktale and then interpret the text. The analysis underlined how readers of different ages interact with a story, and was a highly innovative way to delve into the relationship between writer and reader, Tobin said.

Many of Booth’s books were collaborations, as he strongly believed in getting ideas and voices from as many sources and angles as possible, Tobin said. Overall, Booth was “an evangelist for reading, for good literacy practices, for teachers and their importance in the field, and for student voices. He was an articulate spokesperson on all levels. Everybody knew David Booth and knew his work and had great affection for him.”

Tobin said Booth had a dry sense of humour and was very entertaining, but was also bit of a contrarian. “He was kind of a cheerful curmudgeon.”

David Wallace Booth was born in Sarnia, Ont. in 1938. He took his teacher training at McMaster University in Hamilton, and began teaching drama in Hamilton area schools in 1960. Later he taught summer drama programs in universities across North America and around the world.

Booth’s early work teaching drama boosted his skills as a speaker, said Jones. “He was a dramatic soul. One of the reasons he was regarded as an outstanding public speaker was this dramatic bent. He was a master of the raised eyebrow and the dramatic pause.”

Booth completed a graduate degree at the University of Durham in the U.K., and later earned a diploma in Commonwealth Studies at the University of Oxford. After working as a school board consultant in Toronto, he joined the University of Toronto’s Faculty of Education in the early 1970s. He was with the faculty when it merged with OISE in 1996. From 2008 to 2012, Booth was chair of the centre for literacy at Nipissing University in North Bay. “He really thought teaching was the best and most important profession,” OISE Dean Glen Jones said about David Booth

Booth had one son, Jay, who is often mentioned in his writing, especially in his work on literacy and boys.  In an introduction to his 2002 book Even Hockey Players Read, Booth said his motivation was to “look at the literacy world that my son finds himself in as a young adult male.”

Jay said his father was “incredibly caring, patient and supportive. He was exactly the same with his grandchildren – even the smallest thing was always a big deal to him and he always was so proud and supportive of everything they did.”

Booth always found time to help out friends and family if they needed him, no matter how hectic his work schedule, Jay said. “He was the busiest person I knew, and somehow he was still always there for everyone.”

Booth’s longtime friend and colleague Larry Swartz, a literacy consultant and OISE instructor, said Booth provided the people around him with wisdom, support, and laughs. “His teachings and insights came from working with students, in his own classroom, as a consultant, and as a professor,” Swartz said. “He would find the gem within any student, young or old, and he would shape that.”

Booth gave positive, uplifting advice to anyone who asked, Swartz said. “He was authentic, and he had a never-give-up outlook on life.”

David Booth leaves his brother Jack, son Jay, and two grandchildren. There will be a celebration of his life at U of T in the spring.