Earthquake in Italy: U of T expert on the extent of the damage to historical sites 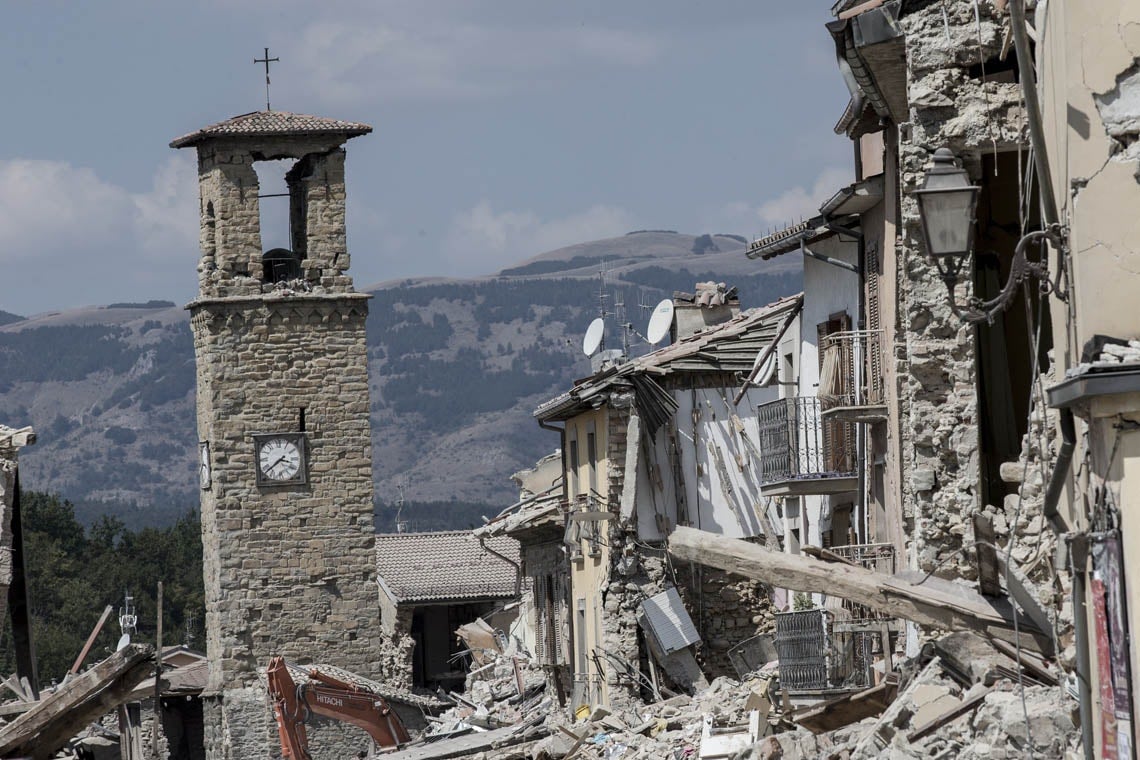 Nicholas Everett: "The images of the bell tower with the clock frozen at 3.36 am are haunting" (Photo by Manuel Romano/NurPhoto via Getty Images)

Last week’s 6.2-magnitude earthquake in central Italy has claimed more than 291 lives with the death toll still rising. As the country buries its dead and digs through the rubble, it is becoming clear that along with the loss of life, Italy has lost scores of cultural and historical sites. The country’s Minister of Culture has said at least 293 cultural heritage destinations were damaged and 50 have been completely destroyed. U of T Medieval History Professor Nicholas Everett, who is soon to publish a book titled Patron Saints of Early Medieval Italy, has been looking at photos of some of the damaged churches. He talked to U of T News about some of the damaged historical sites, noting that it still may be too early to tell exactly what has been lost.

In terms of monuments and historical buildings, what has been damaged or destroyed? In Amatrice, there’s a number of 14th and 15th century churches, containing frescoes and mosaics. The historic churches include that of San Agostino, San Emigdio, San Francesco. These are all but destroyed now. The architecture of these churches and the artwork within were expressions of the aspirations of the town and its identity. Since churches were the focal point of a town's public life, religious art was also the major (and often only) source of patronage for artists and craftsmen of the Middle Ages. The region was the centre of conflict between Angevin and Aragonese rulers but as a result benefited from patronage of rulers attempting to consolidate or shore up their support in central southern Italy. These churches were also part of pilgrimage routes throughout southern Italy.  Most were made from local sandstone.

Norcia is the birthplace of Saint Benedict (6th century), who is the founder of the Benedictine Order and monasticism in the West. The 12th century church on the site of Saint Benedict's home has been damaged, as are the 13th and 14th century frescoes in the church of Saint Agostino. The city’s medieval town walls are also damaged.

The extent of the destruction is not quite clear. It’s coming to light now, and we’re realizing that this went much further than we thought.

Why is it difficult to determine the extent of the damage on historical sites?

Because the earthquake hit some of the more remote regions of Italy, which are not easy to reach, and therefore the information has not come out as quickly. I think they’re going to find a lot more has been destroyed. In a lot of these places, these monuments especially the churches and particularly the mosaics are going to be difficult to reconstruct, if not impossible. Amatrice is a complete tragedy: the images of the bell tower with the clock frozen at 3:36 am are haunting.

The other worry is that because these churches are located in regions that are economically far poorer than other parts of Italy. They don’t have as much infrastructure or as many resources locally to pour in, so they’re going to have to rely on federal help.

Why are these sites historically and culturally significant?

This part of Italy holds a great deal of cultural inheritance from the 11th to the 14th centuries. Some of Italy’s richest artistic endeavours are in these churches. It really is a period of magnificent church decoration. People would pour resources into a church decoration as much as we would a public monument, or infrastructure for the Commonwealth games. So in the Middle Ages, the church and its decoration was a point of pride for the community. And the importation of artists and their particular style was very important. The mosaics and paintings in these churches reflect the aspirations of a city and a sense of pride. Through these mosaics, the pictures and these frescoes, we can trace the history of art as it developed into the Renaissance and early modern period. The artists were mostly anonymous so we don’t know much about them, where they learned their technique or how they achieved their colours and designs, but their work is right in front of you. In that sense, these sites are living monuments. The churches themselves tell us a lot about the city, in some cases it’s the only thing that tells us what happened in that particular town in the 12th to 14th century. We rely on these living monuments to help us maintain the historical record.