'Earlids' required: U of T explores architectural history of open-concept offices, other spaces 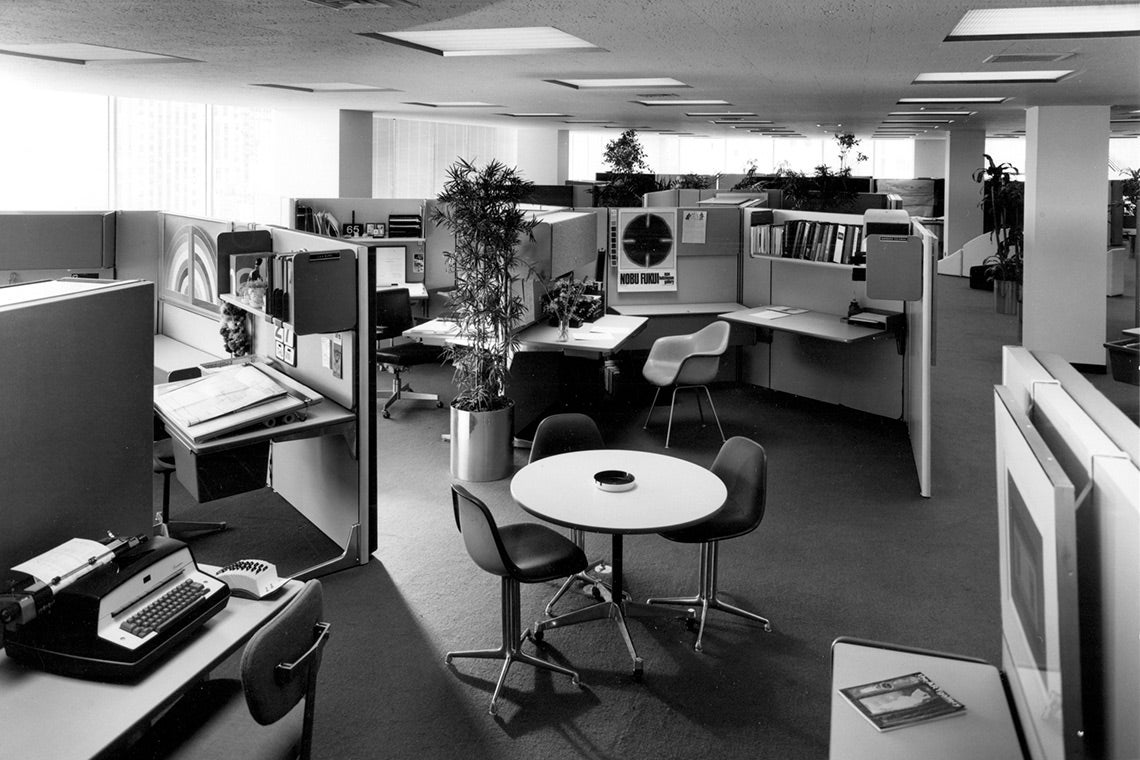 A recent U of T architectural history workshop focused on spaces that house communication-related work, including TV and radio stations, as well as universities, libraries and offices (photo courtesy of Herman Miller)

If you’ve ever worked or studied in an open-concept space, you probably benefited from the free flow of information – from overhearing useful tidbits of chatter to the ability to ask a neighbour for help with a problem.

But, according to Joseph Clarke, an assistant professor in the University of Toronto’s department of art history, you likely also faced some “acoustic challenges.”

The pros and cons of open-concept designs were among the topics explored by U of T scholars and international visitors at a recent workshop called Building Communication: Architectural History and Media Archaeology. The interdisciplinary workshop was hosted by Clarke, who conceived and organized this event with the support of a Connaught New Researcher Award.

“One thing that sets our department apart among North American art history programs is our expertise in the history of architecture,” Clarke says.

“I'm eager to showcase how we are embracing innovative methods in architectural history.”

Talks at the workshop focused on spaces that house communication-related work, including TV and radio stations, as well as universities, libraries and offices.

How do these spaces facilitate or hinder the flow of people, work, sounds, messages and technologies? What effect do their materials, aesthetics and approaches to design have on these flows? And what makes up the larger systems these places are part of — roads, parking lots, empty tracts of land, cities, transit hubs, telecommunications cables?

Clarke presented his current research on the mid-20th century open office design movement. That included the “Action Office” concept introduced by furniture company Herman Miller in the late 1960s, and the work of Wolfgang and Eberhard Schnelle — two brothers who championed an ostensibly human-centric office design that rejected the conventional arrangement of rigid rows of desks.

It was thought that these office spaces – open and malleable – would facilitate collaboration and the flow of information while also challenging the class and gender hierarchies of the corporate environment. But the space presented acoustic challenges, necessitating the use of carpeting, drop ceilings, drapes, quiet music, white noise generators and fabric-covered partitions to direct and minimize sound. The “Action Office” was meant to facilitate a free flow of information, but the acoustics required sound-dampening materials like curtains and carpet (photo courtesy of Herman Miller)

The “sonic exchange of information” was especially valued as a design factor when open-plan workspaces were being developed, says Clarke. He highlighted a quirky but topical remark that famed media theorist Marshall McLuhan made in 1967: “We are simply not equipped with earlids!”

While the high modernism of the late 1960s was enthusiastic about revolutionizing office spaces, the development of computers and the increasing scarcity of office space in the 1970s and beyond meant the dream eventually died. The cubicles we are familiar with today bear little resemblance to the dynamic and innovative “Action Office.”

Among other projects presented at the workshop: Architectural historian Mary Louise Lobsinger, an associate professor in the John H. Daniels Faculty of Architecture, Landscape, and Design, who is also cross-appointed to the department of art history, spoke about her research into a curious tale from the 1960s called the Potteries Thinkbelt.

An ambitious and unconventional approach to making education more accessible and inclusive, the Thinkbelt was a large-scale system of infrastructure and communications technology intended to create a kind of distributed, mobile university on an abandoned railway line in Staffordshire, U.K.. Designer Cedric Price firmly believed in the potential of technology and architecture to open education up to a larger sector of the population, including for unemployed industrial workers in the area.

Price imagined the Thinkbelt would facilitate participatory and self-paced styles of learning – something which we’ve achieved to some extent today with online and distance education.

But the Thinkbelt would never come to be: The 1970s saw the arrival of an era that reduced support for the public sector and dismantled social-democratic principles of education as a public good. The type of “systems thinking” that Price was doing was dismissed as mere “technocratic hubris” – an overconfident dream that technology could lead us to social emancipation.

Despite its ambition, Lobsinger criticizes one particular point about the Thinkbelt: “There are human beings moving through these systems,” she says. “How do people navigate through them and make sense spatially?”

Projects like Price’s, she says, were "really oblivious to bodies."