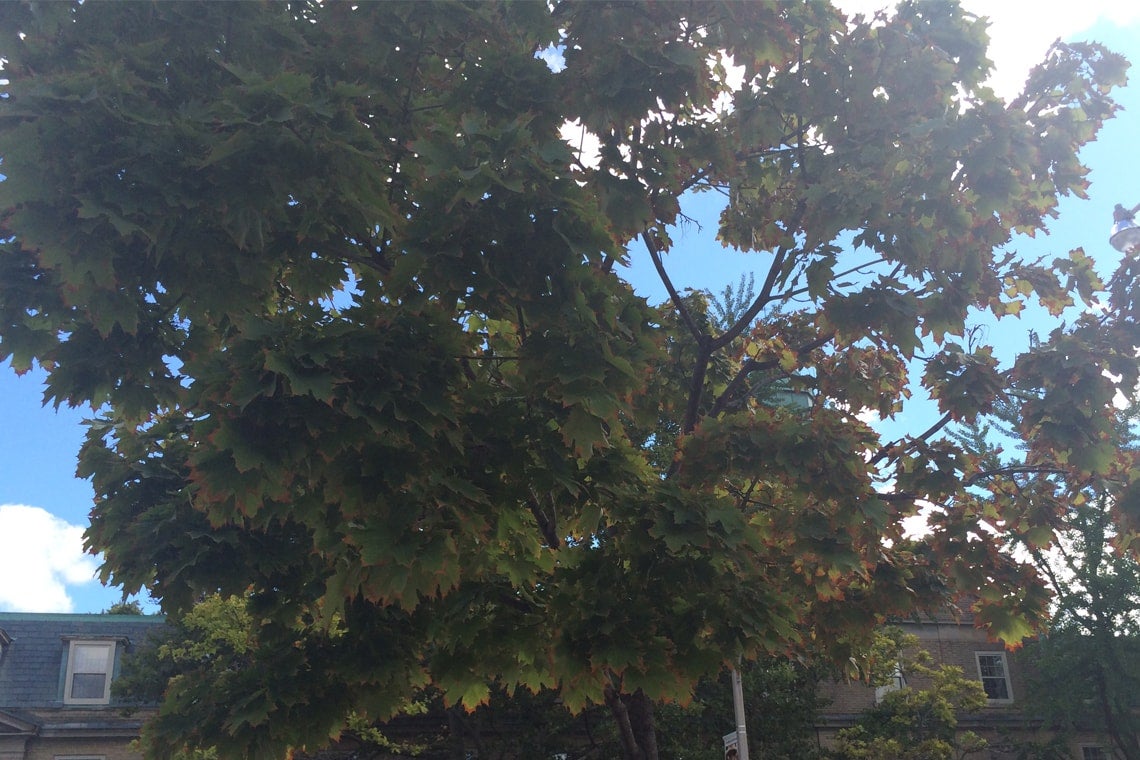 With a dry summer, leaves have begun yellowing and browning sooner (Photo by Noreen Ahmed-Ullah)

That's the message that University of Toronto Forestry professor Sandy Smith wants Toronto homeowners to heed this year, after a hot dry summer. Trees are in such bad shape that Smith thinks the city of Toronto needs to put out an alert advising residents to water their trees and cautioning them that the dry spell can lead to dying branches falling off, as happened when a large branch fell in Trinity Bellwoods Park in June, killing a man below.

U of T News spoke to Smith about what is taking place both above and below ground and how it’s manifesting itself into earlier than normal yellowing and browning leaves.

How is the drought affecting trees?

These hot dry summers have huge impact on trees. It’s not as catastrophic as an ice storm, but it’s basically the same over time. It’s a slow burn, not a fast burn. And drought can affect trees up to five even ten years later.

The trees where the owner has watered or if there’s irrigation, those trees are doing much better. But the other trees are really struggling. They’re starting to shut down. When it’s really dry, the trees close the pores of stomata in their leaves because they can’t lose water. The leaves start to shut down because there’s no energy being stored there. So you start to see die back and no nutrients being shunted down to the roots. The roots start dying back because they’re not getting water. The more peripheral the roots, those that are way out there, they start to die back, which produces a domino effect back up to the top of the tree. So next year you’ll see dead branches where the tree shut down because it’s lost part of its roots.

Without water, the tree is forced to shrink back on top and bottom. The roots die off. The branches die off. They stop sending sap there. The living parts die. So what you’re left with, you’ll see trees with just branches with nothing on them. Next year, you will see more dead branches than you would see in a normal year.

You can’t see below ground, but it’s happening below ground as well. If you look at the roots, you’d see the same thing.

What are the signs that we can see?

I think you can see it through wilting and yellowing of the leaves and browning. You’ll start to see leaf burn, so the edges of the leaves and the tips of the leaves start to turn yellow and then brown-red. Yellow means their dying. Brown-red means they’re dead because of all of the chlorophyll being pulled out or being broken down. The longer the drought carries on, the complete leaf dies, not just the edges and tips. Then, the whole branch dies. So this summer you can see the yellow browning.

What trees are most affected?

The horse chestnuts are going through it. The oaks don’t look so good. When you have a couple of years of really wet moist conditions and all of a sudden a dry summer, this is really hard for trees.

Horse chestnut is a European tree that was planted a lot in the ‘20s, ‘30s and ‘40s. Those are larger trees that are always susceptible to hot and dry conditions. They’re the ones that you see the first signs. The others that are not doing well are ash. In a summer like this, they’re doubling their rate of mortality. Next summer you’ll see even more dead ash. Most of the ash will be dead and almost dead because it was a warm winter and the Emerald ash borer did really well feeding on them all winter, longer than it should have. And now it’s a hot dry summer, which means the trees can’t defend themselves. They don’t have enough sap to pull up and drown these beetles. Next year the ash will be in particularly bad shape with lots of dead branches, Bad shape meaning dying and dead with dead braches and maybe whole trees standing dead.

So what can we do?

The one thing you can do is water your tree. In a summer like this, it’s almost essential. Wherever prossible, the city needs to increase its watering program. The city should also be sending out an alert, raising awareness for everyone. The city should put alerts out for people with trees on their property that drought creates stress on their trees, and they need to look at their trees, not just assume they’re always going to stand there like the hydro pole. They are living things. They are living entities that need water.

Next year, city parks and street trees should be checked. The city needs to increase its vigilance, surveillance of this, to see what the impact of the drought was. After a hot dry summer you should be alerted to potential risks out there like dead branches and trees dropping branches on people.