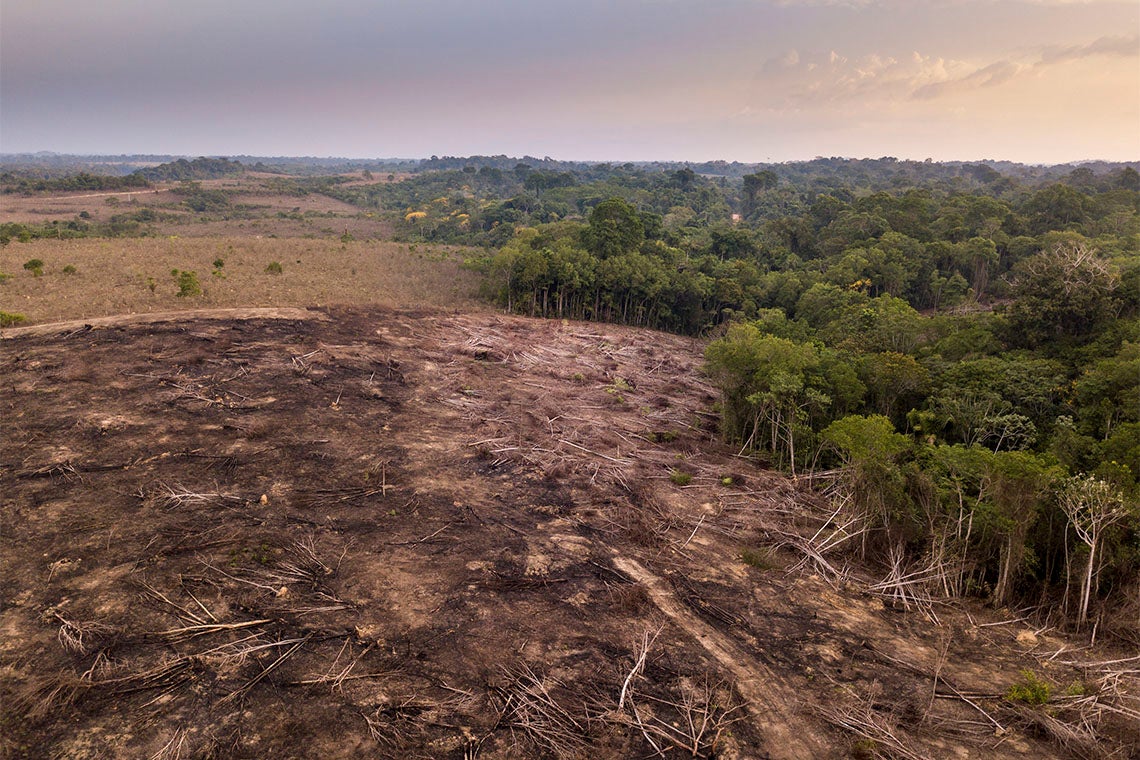 (photo by Paralaxis via Getty Images)

With the dry season ending across the Amazon rainforest, scientists and researchers are once again assessing the damage in a region where tree removal, clearing of exposed land for farming and severe drought are combining to put the lives of populations – many of them Indigenous – at risk.

But there’s now also a new threat to contend with: COVID-19.

Gabriel de Oliveira, a post-doctoral researcher with Professor Jing Chen in the department of geography and planning in the University of Toronto’s Faculty of Arts & Science, says breathing difficulties and respiratory challenges brought on by the coronavirus are being exacerbated by the ecological crisis that had been developing in the Amazon over several years.

He recently spoke with writer Sean Bettam about the relationship between COVID-19 and the environment in the Amazon region.

What has created the current crisis in the Amazon?

The factors are related to the increased deforestation by land grabbers and settlers, the fire-associated processes of cleaning the land in order to implement agricultural activities such as farming and grazing, as well as a severe drought in the western region last year.

Usually, the dry season is normal, with still a good amount of rain. However, due to climate change, the Amazon has been experiencing some drought events that made the dry season worse, impacting the whole ecosystem and making the fires in the region even more dramatic. Furthermore, sea surface temperatures observed last year in the tropical Atlantic Ocean have been unusually high.

To what extent is human activity contributing to the problem?

The deforestation and consequent fire-associated processes are caused by humans who clear-cut mature forest to extract the most valuable tree species, then burn it down and implement agricultural activities such as cattle raising and soybean production. Contrary to what the president of Brazil says, these fires are caused by loggers and big agricultural companies – not Indigenous and native peoples whose lives and livelihoods are endangered.

Under a growing climatic drought threat, felled forest from last year and the 45 per cent of biomaterial that wasn’t burned in 2019 fueled an exceptional fire season that choked the Amazon with fine particulate air pollution.

How has the pandemic both exacerbated and been worsened by an already dire situation?

The smoke arising in large quantities from forest fires is extremely toxic, causing shortness of breath, coughing and lung damage. Previous studies have shown a likely relationship between air pollutants linked to fire – such as the class of miniscule airborne particles with diameters of 2.5 micrometres and smaller known as PM 2.5 – and COVID-19 infection. This suggests that widespread fires could aggravate the current COVID-19 crisis. In the Amazon, for example, fires are responsible for 80 per cent of increases in fine particulate pollution regionally, affecting 24 million Amazonians. So, air pollution will likely significantly increase COVID-19 infections and deaths, with the most devastating impacts among traditional and Indigenous people.

A governance crisis in Brazil created highly visible increases in Amazon deforestation in 2019, and our research shows that pre-existing conditions of deforestation and drought gave rise to fire and the respiratory health crisis that unfolded last year.

Our findings offered a clear warning while effectively calling for swift action to enact a deforestation and associated burning moratorium in at-risk Amazon areas this year. Such a moratorium would avoid or reduce the catastrophic impacts caused by the combination of smoke and COVID-19.

Will the wet season in Brazil provide lasting relief for residents across the Amazon?

The wet season will simply be a small pause, with the return of the dry season later this year meaning a return to the risk of further loss of life and ecological devastation.

The dry season last year was devastating – not only because of the deforestation and fire records, but also because of the positive land surface temperature anomalies in the region that occurred, which made the situation even worse.

The fact is the land surface temperature in the region is still above the historical average – by as much as 2 to 4 degrees Celsius in some areas. Last year’s dry season, which was supposed to end in December may be extended through January and February, making the wet season consequently shorter, and bringing several impacts in 2021.