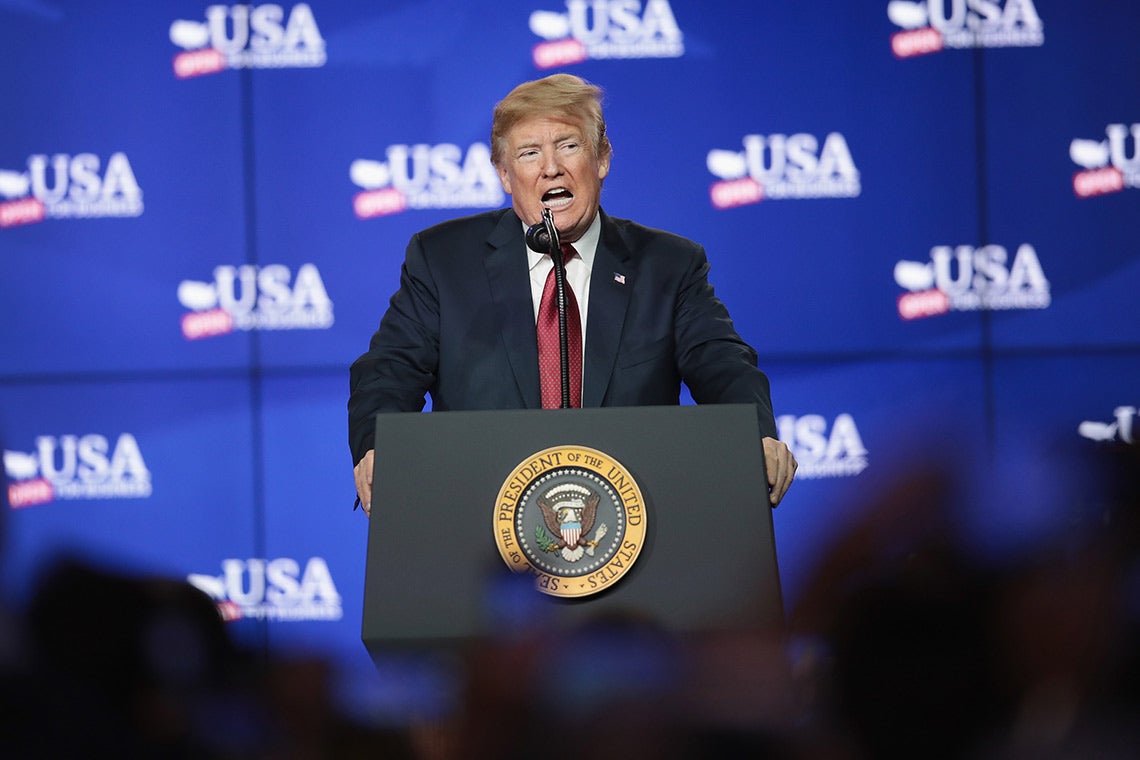 If political power grows out of the barrel of a gun, as Mao Zedong once proclaimed, the same can be said about the United States’ trade deficit in general.

In this instance, the gun is American and being wielded by U.S. President Donald Trump, who has a puzzling aversion to trade deficits despite the fact they’ve helped fuel the U.S. economy for decades.

If we were to take a little walk down the memory lane, we all know that the U.S. won the Cold War with the collapse of the Soviet Union. But America paid a price by losing its consumer industrial base and more than 58,000 lives.

Following the Vietnam War, the U.S. expanded its military industrial complex and has since engaged in several military conflicts, big and small.

To understand the connection between war and the trade deficit, we must understand four major historical markers in contemporary American history.

The first is the Vietnam conflict (1954-1975), a proxy war that pitted siblings against each other – North and South Vietnam – and resulted in more than three million deaths on both sides. The north was supported by China and the Soviet Union, and the south was supported by the U.S. and its smaller military allies, notably South Korea and Australia.

While that was going on, President Lyndon Johnson in 1964 waged a very costly second front at home – the Great Society program aimed at ending poverty, reducing crime, abolishing inequality and improving the environment.

Not to be outdone, President Ronald Reagan’s 1981 tax cut partly contributed to recharging the American economy in the midst of a recession, but it also created massive government deficits.

But the most important historical event of the four is the fact that America abandoned what’s known as the Gold Standard in 1933. The policy banned creditors from demanding payments in gold. It then fixed the exchange rate between gold and the dollar at US$20.67 per ounce, and then increased it to $35 per ounce.

In 1971, President Richard Nixon announced that the U.S. would no longer convert dollars to gold at a fixed rate of $35 per ounce. And that freed the U.S. government to issue more money. And issue they did.

Connecting the dots among these four historical events requires examining them through the prism of three American undertakings – winning the Cold War from a defence perspective, increasing civilian consumption and finding a way to finance the two.

The U.S. opted to take care of its defence requirements domestically in order to protect, strengthen and sustain its vast military industrial complex.

To spur consumption, the Americans found it more efficient to outsource a significant part of that task to its allies, notably Japan and other Asian Tigers at the time (Taiwan, Singapore, Hong Kong, South Korea) and, later on, China, among others.

This marked the beginning of a prolonged track of American trade deficits.

The remaining task was to find a way to finance these two enterprises. In normal circumstances, a country can run trade deficits for a while, and if it continues, the price of its currency must go down.

The country buying goods from other nations must sell its own currency in order to buy the currencies of the countries from where it imports, or to buy U.S. dollars to pay for those goods since the American greenback is considered a secure global currency.

This cannot go on for very long before the local currency collapses in value as a basic consequence of supply and demand. But it’s different for the U.S. – the American dollars at home are the same dollars needed to pay for imports, and the U.S. simply supplies more of them when needed.

Because countries buy U.S. dollars to trade their goods, the ones that earned money thanks to American outsourcing reinvested their dollars back into the U.S. in financial and other investments.

Oil-producing countries in the Middle East, for example, do that by reinvesting their U.S. dollars from selling oil back to the U.S. and via American dollar-denominated investments elsewhere.

The Japanese do so as well, and did so massively in the heyday of the Rising Sun, and the Chinese have been doing the same with their trade surplus with the U.S..

Today, the two biggest sources of U.S. foreign debt are recycled dollars from the Chinese and Japanese. The shrinking of the American consumer industrial base has been offset by this incredible expansion of its financial industry thanks in part to China and Japan investments.

In short, U.S. consumers acquire many of their goods from these countries. These importing nations then invest the money made from selling those goods to the Americans into U.S. treasury bills and bonds, which helps fuel the American economy.

But the real question is why do these countries have such confidence and trust in the U.S. dollar?

The answer: America has a secure geography with two big oceans on the east and the west that form a natural security barrier. A friendly Canada lies to the north and relatively weak countries lie to the south. Geographically, the U.S. is secure, militarily it is the strongest, and economically it is among the most capitalistic countries.

And so given Americans have had it so good for so long, why is Trump complaining about trade deficits? Trade deficits, after all, have allowed Americans to consume and spend more, to save less, to grow American company profits, and to save itself from having to endure additional and enormous environmental damages due to manufacturing and production.

By one estimation, the U.S. trade deficit with China last year was 36 per cent lower than commonly reported when all factors are taken into account.

And so America’s trade “war” with China will hurt the sectors in which the U.S. is doing relatively well – in semiconductors (a crucial component in electronic products), commercial aircraft, automobiles and products within the food and energy supply chains.

And it will eventually cause hardships for low-income Americans who must buy everyday household consumer goods. In China, low-income Chinese will also be hurt the most by higher food and energy costs.

The U.S. recently announced tariffs on 1,102 Chinese products. China promptly retaliated by announcing tariffs on 659 American imports, including soybeans and automobiles. Trump fired back, using a bigger gun, by asking his administration to identify an additional $200 billion worth of Chinese products for a 10 per cent tariff.

If nothing changes in the interim, the announced measures will come into effect soon.

If Americans truly want to reduce the trade deficit and increase real income in the long run, they must increase personal savings, lower government deficits by reining in military spending and perform major surgery on health-care costs.

These changes hold the keys to freeing up necessary resources for rebuilding America's consumer industrial base, its crumbling infrastructure and its decaying public education system.

Low-skill industrial jobs are not going to come back to the U.S.. Even China has slowly started the process of moving some low skill and low value-added jobs elsewhere.

America has an income and opportunity distribution problem, and Trump’s obsession with trade deficits and his subsequent wielding of the tariff big guns, is the wrong approach.

Hoa Trinh is an instructor of business management at the University of Toronto.