‘Don’t expect any form of denuclearization quickly’: U of T expert on Trump's North Korean deal 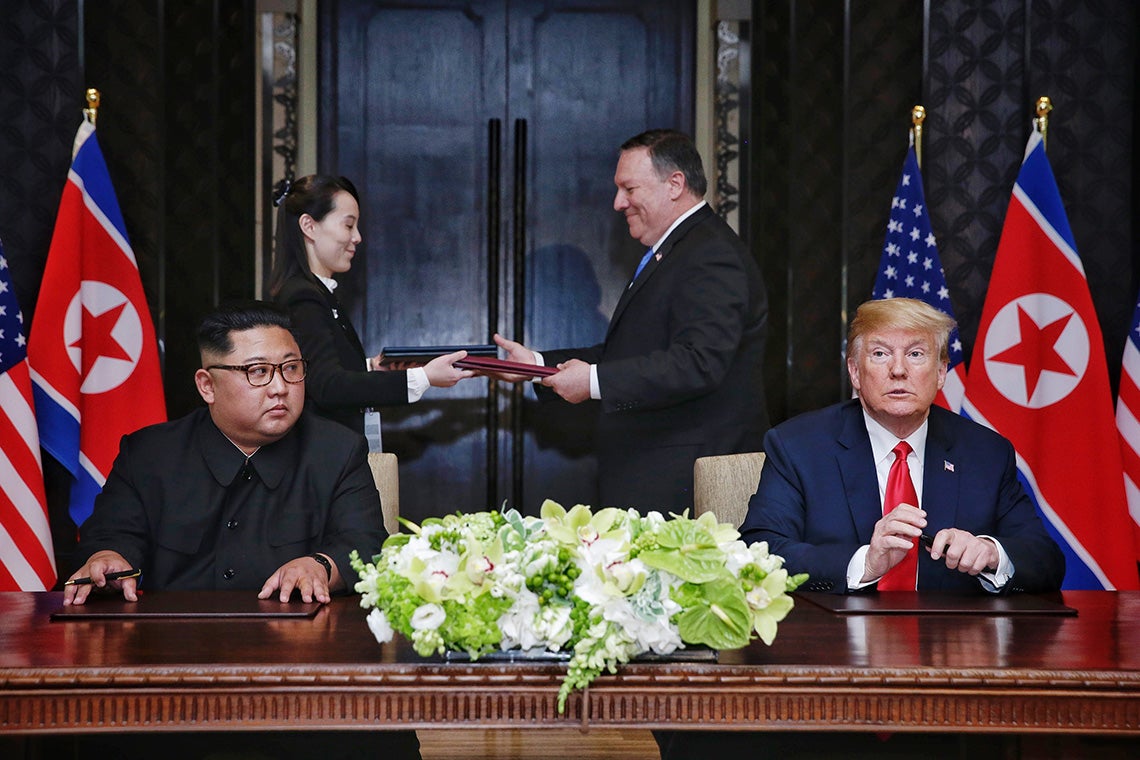 U.S. President Donald Trump was quick to declare his landmark summit with North Korean leader Kim Jong-un a success. This morning, he continued on that path, tweeting, “There is no longer a nuclear threat from North Korea…sleep well tonight!”

The two leaders met in Singapore on Tuesday, signing a declaration on denuclearization and reducing tensions. Trump has said Pyongyang has agreed to complete denuclearization, and that the U.S. would end joint military exercises with South Korea.

Andre Schmid, associate professor of East Asian studies in the Faculty of Arts & Science and the Munk School of Global Affairs, offers up a reality check on the pact and the history of U.S.-North Korea relations.

It’s been remarkable to watch as Trump has been completely able to frame the issue of denuclearization in the English-language media. When he first started, his policy was for a quick “win.” Remember when it was all supposed to happen – “no problem” – in six months? He changed his tune as the summit approached – evidence that he, too, can learn once in a while. But, quite incredibly, the media now uses the initial terms he set – the quick resolution – as the criteria for judging the success or lack thereof of the summit. Did any one seriously expect Trump to return after a short sit-down with Chairman Kim with a resolution to a decades-old challenge?

Should we trust North Korea to uphold its side of the bargain on denuclearization and destroying a major missile testing site? Why the change of heart in North Korea?

It’s quite clear that North Korea is willing to destroy certain facilities as well as curtail some of its experiments and testing as part of an agreement or to create a diplomatic opening for an agreement. This shouldn’t be read as a willingness either to denuclearize completely or to permit the type of verification protocols that, for example, were implemented however briefly in the Tehran deal. My guess is that we are going to have to learn to live with the fait accompli of North Korea as a nuclear state. The realistic question is how can they be limited and controlled.

Why the change of heart in North Korea? That’s the big question. In part, it is in reaction to the change of heart in the countries surrounding them – in South Korea, a president elected on a platform of engagement who is willing to be a flexible mediator; in the U.S., the swaggering bellicosity of the Trump administration, as well as the tensions with China. It’s still unclear how much, if any, impact the UN economic sanctions have had on North Korea's economy since, according to the latest assessments coming out of Seoul, the North Korean economy continues to grow. That growth relates to the greater emphasis Kim Jong-un is putting on the economy – though it’s still too early to know his intentions in this realm. Loosening the sanctions to create more possibilities for the economy is also a motivation – though, again like with so many North Korean matters, we do not know how much of a priority this is.

Another way of looking at this is that North Korea has been successfully pursuing a long-term strategy of developing nukes precisely because it was a rational and cheaper way to defend itself while offering various other negotiating possibilities on the international stage. We wouldn’t be having this summit, and North Korea would likely simply be ignored if it were not for the nukes. If you believe this, the North Korean regime’s strategy – minus the cost on segments of the population, of course – has been been what Trump likes to call a “win.”

What has the U.S. agreed to? What security guarantees is Trump talking about?

That’s another big question: What is the U.S. willing to give in negotiations. I have to admit I’m surprised that Trump gave up on the joint military exercises – something that North Korea and China have called for, for many years. You can be sure that will be insufficient for the North Koreans.

A peace treaty to end the Korean War (1950-53), which was terminated with only an armistice, would be at least a starting point.

This has been such a strange relationship, starting with threats, then an agreement to talk, then the talks being called off and then being called back on again. Can you speak to how this has all unfolded and whether this is reflective of Trump or Kim Jong-un?

North and South Korean states have a long history of tumultuous relations with many stops and starts, many hopes and many dashed hopes. Throw in Trump’s personality to that mix, and it is not surprising that an already dramatic international issue has ratcheted up the spectacle. In terms of the fundamentals, however, the same questions and struggles remain beneath that spectacle. There is still no clear path to a negotiated peace in Northeast Asia.

What does this mean for Canada?

There’s a fundamental question: What can Canada do? Since establishing diplomatic ties with North Korea in the early 2000s, we have done very little – this despite the proud tradition of our diplomatic service having worked to establish productive relations with the People’s Republic of China well before the United States. The recent Vancouver summit on North Korea, sponsored by Global Affairs Canada, offered some possibilities, which I hope will be taken up now that the United States is talking with North Korea. Of course, any initiative with North Korea will inevitably be overshadowed by our relation with Washington, D.C., especially after the debacle of the G7 summit. But if there is any issue where more actors need to be engaged, it is on the Korean peninsula. The Canadian government should be working closely with the South Korean government – the real movers on the Korean peninsula – to determine what positive role they can play.