Do a PhD? Build a startup? You can do both, U of T student says 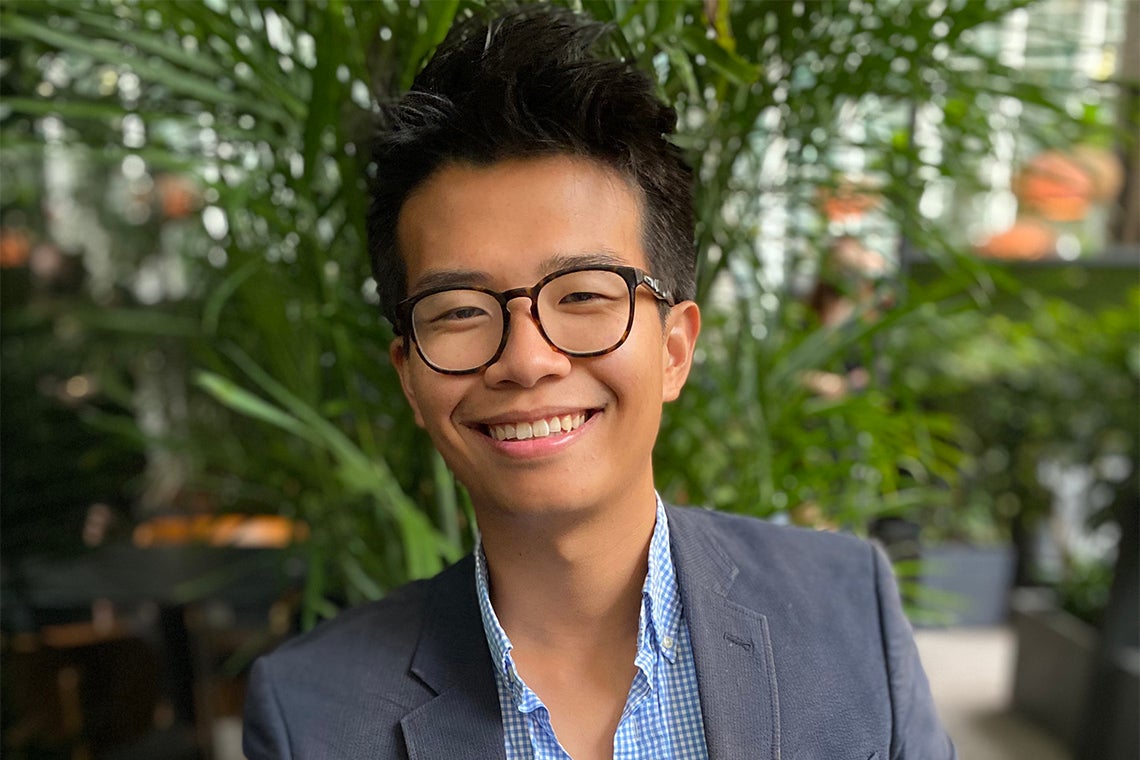 Mickael Dang, a PhD candidate in the lab of U of T Engineering's Molly Shoichet, says he took advantage of the flexibility associated with remote learning to become involved in the entrepreneurship community (photo courtesy of Mickael Dang)

Mickael Dang thinks a lot about work-life balance as he juggles a science PhD with a business degree and running a startup.

“From the get-go of my PhD, my goal was to not only advance science but also to create something tangible at the end,” says Dang, a second-year PhD candidate at the Donnelly Centre for Cellular and Biomolecular Research in the University of Toronto’s Temerty Faculty of Medicine.

“The challenge is to find a way for these two goals to co-exist in my life, to thrive in multiple areas,” he says.

So far, Dang is meeting that challenge.

He recently received the Cecil Yip Award for outstanding students pursuing interdisciplinary and collaborative research in the Donnelly Centre. His project involves creating a gel-like biomaterial that can be infused with an antimicrobial drug to treat corneal infections. The startup he co-founded, meanwhile, seeks to develop faster, cheaper, and portable PCR tests.

Dang is based in the bioengineering lab of University Professor Molly Shoichet, of the Faculty of Applied Science & Engineering, who is world-recognized for developing biomaterials that support drug delivery and tissue repair in ailments from blindness to cancer.

“Professor Shoichet serves as an inspiration not only for her expertise in the scientific discipline, but also for her entrepreneurial mindset – and so I believed I would be a good fit,” says Dang, who is from France and holds U of T’s Connaught International Scholarship.

Dang is no stranger to pursuing his passions in the face of challenges.

Born to Chinese immigrants, he says he did not have an easy time growing up in the gritty town of Pantin near Paris. Money was tight and he experienced racism from an early age. “France is not very welcoming of other cultures,” he says.

At the same time, Dang notes that he was lucky to have been born in a country where education is free at all levels. “It was my way out of hardships.”

While his parents hoped he would become a doctor or lawyer, Dang realized two years into a medical degree program that his heart was in research. So, he switched to biomedical sciences, prompting years of estrangement from his family.

To financially support himself, Dang waited tables before he started earning money as a science tutor – all while continuing his studies.

He obtained a master’s degree in applied physics from École Normale Supérieure in Paris, then went to Boston for a research stint. There, he met and worked with Jeff Karp, a professor of medicine at Harvard University and Shoichet’s former mentee.

With his current project in Shoichet’s lab still at an early phase, Dang has been cutting his entrepreneurial teeth, and will complete a two-year virtual master’s program in entrepreneurship from the business school HEC Paris next month.

He’s also developing a startup called SMS NanoTech that he co-founded with three collaborators from Toronto’s Sunnybrook Health Science Centre and McGill University in Montreal. They met during virtual entrepreneurship events at U of T’s Health Innovation Hub (H2i).

Ironically, the union was hastened by the pandemic that had pushed so many into social isolation. Like many other international students, Dang says he found the lockdowns especially difficult and sought any opportunity to connect with people.

“I was sick of the loneliness, and I wanted to get out of that as soon as possible,” he says. “But because most of my classes were virtual and I was working from home, I could take on other projects. COVID gave me flexibility.”

The portable PCR tests SMS NanoTech is developing for viral infections use a proprietary microfluidics technology developed at McGill that is unrelated to Dang’s PhD project.

As Chief Business Officer, Dang’s job is to develop business plans and raise funds. His presentation during a recent pitch contest at H2i won the Student Innovation Fellowship award – a noteworthy feat considering Dang only started brushing up his English a couple of years ago while working in Boston.

Last year, a French news article featured Dang and his rise from the outskirts of Paris to a Harvard lab. His parents saw it and reached out to Dang for the first time since he switched from his medical degree.

“I did not understand my parents’ point of view at the time, and I still don’t,” says Dang. “They believe that you need to do things for money, not passion.”

Needless to say, Dang takes a different view. “To be good at something, you must be curious,” he says. “I switched to research and entrepreneurship because I was curious about it. And curiosity drives success.”