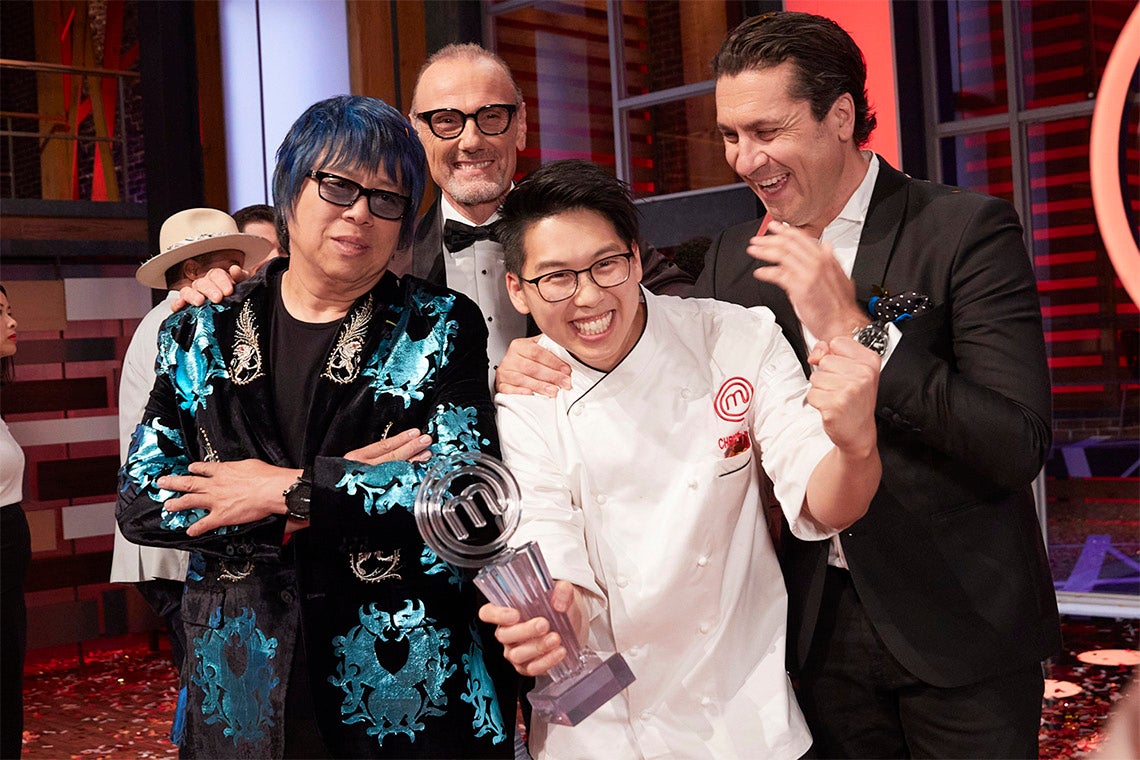 Christopher Siu, an alumnus of the Leslie Dan Faculty of Pharmacy, recently took home the top prize on MasterChef Canada – and says he continues to draw on his U of T education to inform his baking and cooking (photo by Geoff George/CTV)

Christopher Siu long dreamed about being the owner of a bakery and pastry shop following a successful career in pharmacy. But two appearances on the reality TV cooking competition MasterChef Canada and a $100,000 win in the series’ most recent season have accelerated – and expanded – his culinary ambition.

The owner and head baker at Daan Go Cake Lab and graduate of the University of Toronto’s Leslie Dan Faculty of Pharmacy, is growing his reputation in Toronto’s food scene by combining his interests and passions: Western pastry making, Asian ingredients and techniques – even his U of T education.

“When I cook or bake, it’s all about the passion and the story I’m trying to tell with the food I’m creating,” he says.

Siu says he first became interested in baking as a child, when his father made him a cheesecake for his sixth birthday.

“It created these memories of joy and this fascination with baking,” says Siu, who grew up in North York and Markham, Ont. after his parents emigrated from Hong Kong.

As a young person, baking was among Siu’s favourite hobbies, and he progressed from simpler recipes to more complex pastries and desserts – mostly using traditional French techniques.

Siu applied to be on MasterChef in 2015, during the final year of his doctorate in pharmacy (PharmD) program at U of T. He was accepted, but the shooting schedule landed squarely in his final block of experiential pharmacy rotations, which he deferred to accommodate the show.

While he came in fifth in the competition, the judges and other competitors recognized Siu’s baking skills.

He says the experience changed his life.

“It really opened my eyes to a whole new realm of possibilities,” he says. “I met amazing people from different backgrounds, including the judges, and I had the communal experience of living with the other competitors and sharing our food.”

The group would have potluck dinners in the evening after filming, which Siu says were like a typical potluck with family or friends – but more competitive.

The variety of food at the potlucks exposed him to many different flavours and ingredients, which in turn inspired him to learn more about cooking and savoury dishes, and incorporate more of his East Asian heritage into his food.

When shooting for the season wrapped, Siu returned to the Leslie Dan Faculty of Pharmacy to finish his rotations and degree, then worked as a community pharmacist in Oshawa, Ont.

After two years, he had saved enough money to open Daan Go Cake Lab, a bakery specializing in desserts that blend East Asian and Western techniques and flavours.

The bakery was successful and had expanded to two locations in Toronto when MasterChef producers asked Siu to return for the show’s seventh season, which would reunite competitors from previous seasons.

Siu jumped at the chance.

“One of the most difficult things about such a huge career change is that you always have a bit of self-doubt,” says Siu. “I thought this was an amazing opportunity to show the other competitors, the audience and the judges how much I’d grown – and to prove that to myself.”

Shooting ran in summer 2020, with competitors quarantined in a hotel and tested regularly for COVID-19. Siu says the experience was intense – competitors were often at the studio for 12 hours a day, five days a week – and anxiety was high because one competitor was eliminated after each culinary challenge.

For the finale, he and two competitors each prepared a three-course meal.

Siu’s winning dishes told the story of his evolution as a chef, featuring Thai seasonings in a ceviche, a smoked tea egg served with duck breast and a modernized take on a Chinese dessert with elements of cheesecake.

For example, a signature cake features a French-style base layered with Osmanthus jelly, a common element in Asian desserts.

He also uses the skills he picked up while studying at U of T – including finding new ingredients and approaches that help maintain a texture after freezing, or to reduce sugar content.

“I’m always trying to push my understanding of the pastry world, so I read and critically appraise food science studies and think about how ingredients can be used,” he says. “In almost every cake, there is some element of my pharmacy background that has improved it in some way.”