Digital trailblazer: Estonia's prime minister to speak at U of T about country's transformation 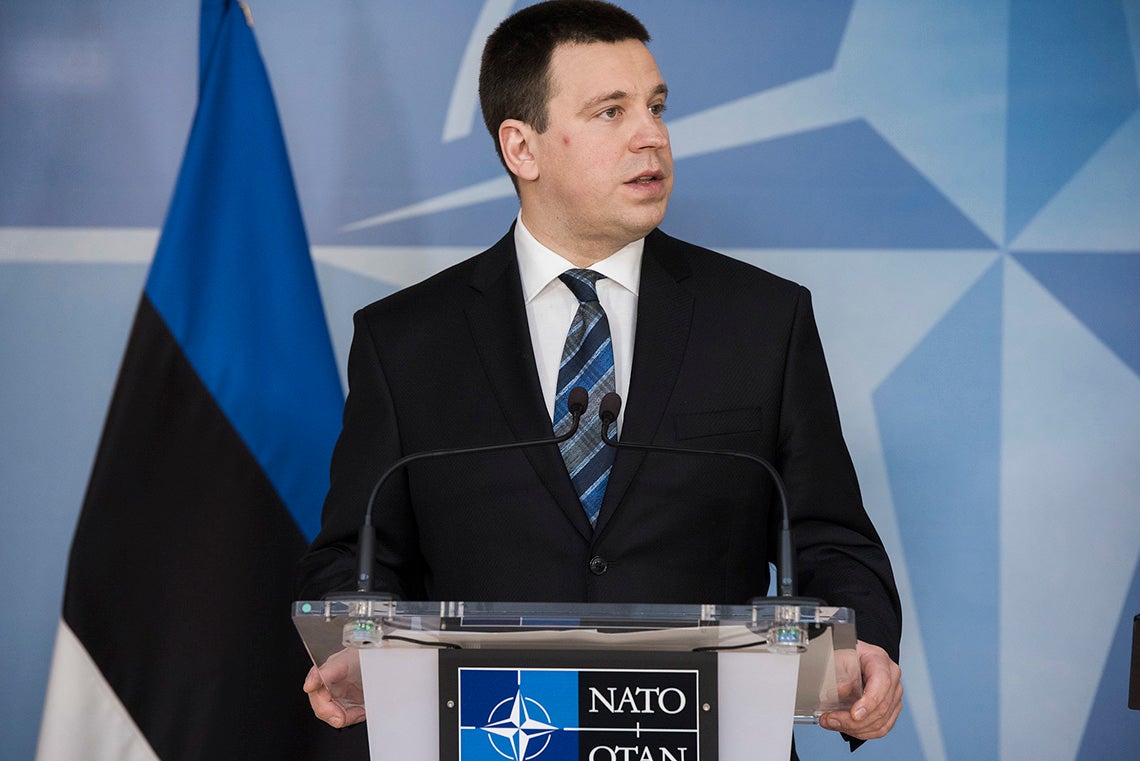 Jüri Ratas, Estonia's prime minister, gives a press conference while visiting NATO last year. He will speak at U of T's Munk School of Global Affairs on May 25 (photo by NATO via Flickr)

Estonia is considered a model of digital efficiency, with the Baltic country, a former Soviet state, having reinvented itself as the most digitally advanced government worldwide. Prime Minister Jüri Ratas will highlight his country’s successes during a May 25 lecture at the University of Toronto's Munk School of Global Affairs.

Estonia has declared internet access to be a basic human right and free WiFi is ubiquitous nationwide. It was one of the first nations to create a national cybersecurity strategy, and its cabinet prides itself on being paperless. Schools teach children as young as 5 years old to code. The country’s 1.3 million people vote, pay taxes and sign legal documents online.

Professor Andres Kasekamp, chair of Estonian Studies at the Munk School of Global Affairs, has watched closely as Estonia continues to undergo the transformation that began 30 years ago.

“Basically, when Estonia’s independence was restored in 1991, the country set up the aim to catch up and integrate into the western world as quickly as possible and to distance itself from the Soviet legacy,” Kasekamp said. “They had a young, radical government that wanted them to be well-prepared for membership in the European Union and NATO, which they accomplished in 2004. Showing that they were reform-minded was helpful to that process.”

Turning the government and businesses into paperless institutions was also a way to ensure fairness and avoid the corruption of the Soviet era, Kasekamp said.

“If you switch services to online platforms, there is no need to deal with individual bureaucrats and bribes,” he said. “There is more transparency. Estonia is one of the least corrupt countries in Eastern Europe and in all of Europe.”

Estonia also became a leader in digital security after a 2007 Russian attempt at hacking into the government system drove additional cybersecurity efforts and advocacy. Today, it is home to the NATO Centre for Excellence in Cyber Defence, which annually hosts the world’s largest live-fire cyber defence exercise, Locked Shield.

The foundation of the country’s digital system, Kasekamp noted, is the national identification card provided to each citizen. It is essential to accessing government services online, all encrypted using blockchain technology, which records each online interaction.

“The consensus is that hash-linked, time-stamping blockchain is pretty safe,” said Joshua Gold, a U of T European studies alumnus who is serving as an intern at the NATO centre. “It’s virtually impossible to destroy data without people knowing.”

A digital revolution similar to Estonia’s would be harder to achieve in Canada and other larger nations, Kasekamp said.

“It’s a small country where everyone knows everyone else,” Kasekamp said. “People trust the state and the government with the data, which wouldn’t work elsewhere. All the data is shared, so it’s a bit of a trade-off, but people are accustomed to the ease of accomplishing things.

“It takes a co-ordinated and determined effort to achieve this digital success, and perhaps that’s easier in a small country. All levels of government worked well together to make this happen. In Canada, with its federalism, it might be a bit trickier.”

It isn't necessary to be a resident of Estonia to take advantage of its digital assets. Outsiders can become e-residents for a fee and a fingerprint check. The resulting digital ID card makes it possible to establish a location-independent business there and establish a bank account that comes with an EU international bank account number.