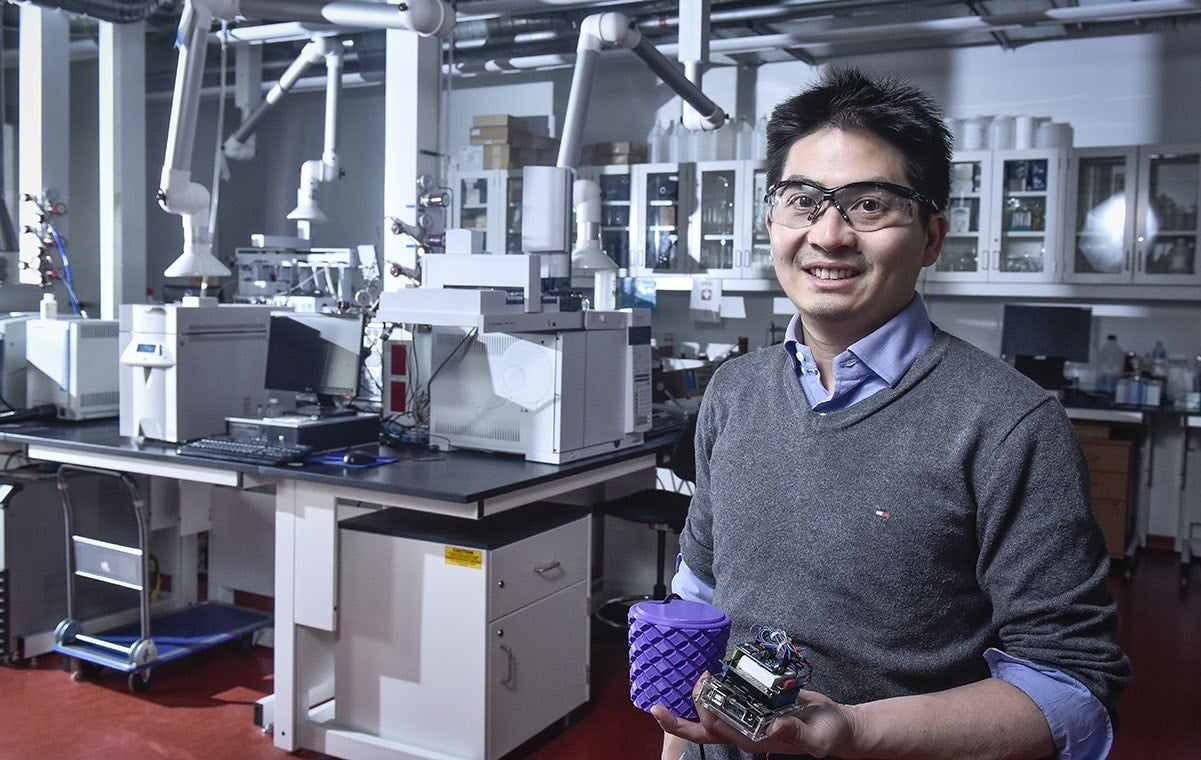 Ron Soong has built an assistive lab device for students with physical challenges that can pour, talk and record data. (photo by Ken Jones)

Ronald Soong has always enjoyed tinkering with electronics. Not only does he build devices in his spare time, he also volunteers as a basic electronics instructor.

“It’s definitely a hobby and something I’m really passionate about,” says Soong, who is the senior NMR scientist and NMR manager at U of T Scarborough.

So  it’s only fitting that after setting out to build a device to help make laboratories more accessible, he would end up with prototypes that can inject a precise amount of liquid, read and record data – and even one that has a talking thermometer.

“I want to make science more accessible to students,” says Soong, who also volunteers as an Arduino programming instructor at U of T Scarborough’s MakerSpace.

“If a student with a disability wants to do an experiment, it should be a positive experience and they shouldn’t have to worry about whether they can perform an experiment or not.”

He was initially interested in creating a device that could transfer substances without human error affecting the data, but soon saw the possibilities of it helping making lab work more accessible. He then reached out to Tina Doyle, director of AccessAbility Services, in August to see how a potential prototype could meet those needs. Soong consulted with Tina Doyle, director of AccessAbility Services at U of T Scarborough, on building the device (photo by Ken Jones)

Before long, he was looking at how he could develop ones with text-to-speech capabilities.

“I was impressed by Ron’s commitment, but I was really amazed at how quickly he was able to build and test a prototype,” says Doyle, who also connected Soong to Mahadeo Sukhai, head of research and chief accessibility officer at the Canadian National Institute for the Blind (CNIB), who helped consult on the project.

Students with physical challenges are not well represented in the sciences, says Doyle, who helped author a study on the need for accessible science labs for the Council of Ontario Universities with the National Education Association of Disabled Students.

“We know that people with disabilities are often discouraged from the sciences at a young age, but the lab environment can be safe and accommodating, you just need to develop ways to enable participation,” she says.

The prototypes developed by Soong use open source technology.  The one that has a talking thermometer can also record the data into an external chip. Another prototype can transfer a solution into a beaker using an arm that is connected to an external controller, like a smartphone.

While many of the comparable devices with text-to-speech capabilities on the market cost upward of $2,000, Soong’s can be made for around $150.

He says many high schools may only have one device, or none at all, due to the high cost of assistive technology. He hopes by lowering the cost it can make science more accessible.

In the meantime, he will showcase the device at the upcoming Toronto District School Board’s Eureka Conference, and he also plans to make the devices available through an open-source platform so others can build or add to the design.