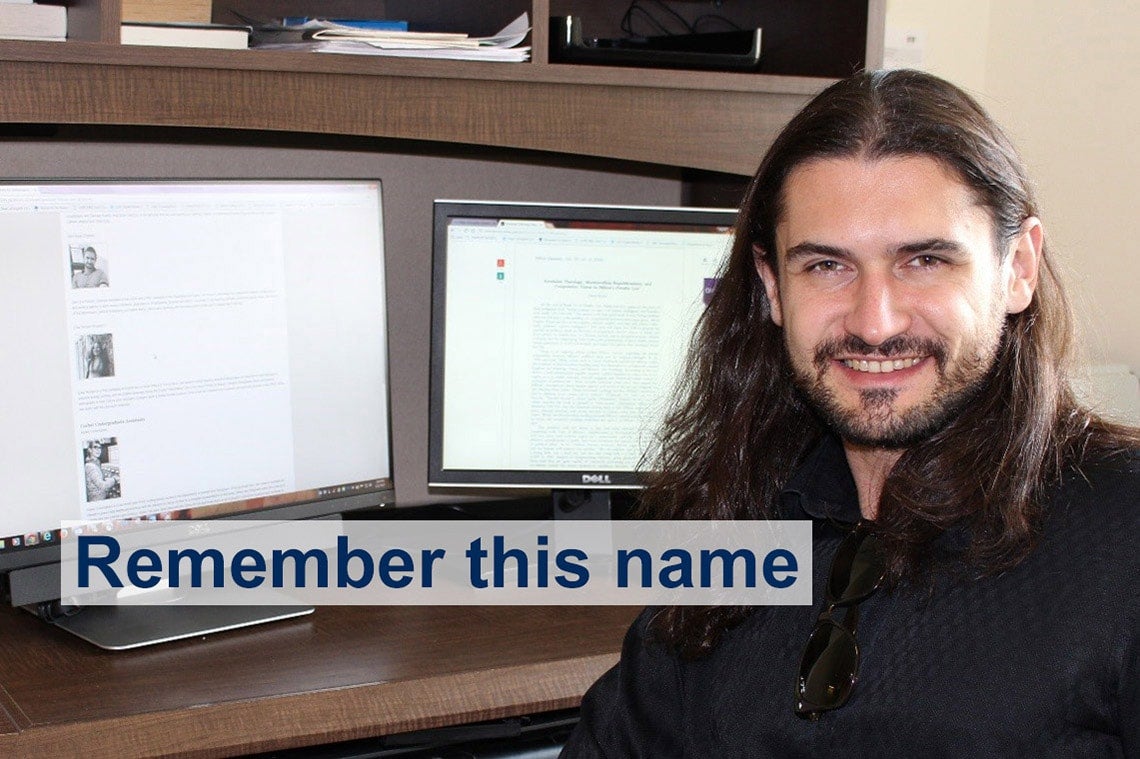 Deni Kasa on his research at Tel Aviv University: "The significance of this topic is that it helps us see religion and secular life as categories with shifting boundaries, especially in the early modern period (photo by Wajiha Rasul)

Deni Kasa remembers being apprehensive about coming to University of Toronto as an MA student in the department of English. "I had expected, based on the prestige of the school, that U of T would be a somewhat cold place where I would need to work very hard to get any attention."

But, he says, "I found U of T English to be a department that not only went toe-to-toe with the top universities in the world but that also preserved an intimate, warm, and genuinely supportive community." In fact, when it came time to do his PhD, "there was never any question in my mind about where to apply."

Kasa successfully defended his PhD dissertation – “Graceful Symmetry: The Politics of Grace in Shakespeare, Spenser, and Milton" – last month. His supervisor, Professor Paul Stevens, chair of the department of English in the Faculty of Arts & Science, describes Kasa as “a natural intellectual, a careful reader and imaginative thinker, quick on his feet and always willing to learn.”

Kasa, who hails from Albania, is part of a new generation of thinkers transforming research across the globe. They come from all corners of the world to do their PhD or postdoctoral research at the University of Toronto, drawn by the chance to work with the leading experts in their fields.

In the latest instalment of a series from U of T News, we turn the spotlight on Kasa. Below, he talks about his postdoctoral fellowship at Tel Aviv University, his research on the anti-Trinitarian origins of liberalism and the significance of his work.

Why did you choose U of T?

I knew early on that I wanted my dissertation to include a significant component on John Milton, and U of T has been a leader in Milton studies for generations. The most important factor, however, was the friendliness of the department of English, which I first experienced during my MA. I had expected, based on the prestige of the school, that U of T would be a somewhat cold place where I would need to work very hard to get any attention. This expectation was totally wrong. I found U of T English to be a department that not only went toe-to-toe with the top universities in the world but that also preserved an intimate, warm, and genuinely supportive community. I couldn’t be happier that I was here, and there was never any question in my mind about where to apply for my doctoral studies.

How did taking English at U of T help you in your research?

The faculty is the key advantage. U of T boasts more specialists in early modern studies alone than most other English departments have in all periods combined. The faculty members are not only brilliant, but also very generous with their time. I found it very easy to find help on everything from research problems and methodologies to job applications and teaching strategies. My dissertation came directly out of these engaging discussions with various faculty members, and my successes in the postdoc applications and job market were largely due to the extremely generous feedback I received from the faculty.

Moreover, I couldn’t have done my work without U of T’s excellent resources for literary studies. The most important asset is the world-class library system, which has never left me unable to access the books I needed to do my research. My colleagues who work with rare books have benefited especially from the Thomas Fisher Rare Book Library; in my case, Robarts had all I needed and more. Finally, U of T is home to scholarly centres such as the Centre for Renaissance and Reformation Studies (CRRS), which was a second home to me throughout my doctoral studies. I would recommend the CRRS and similar centres to all PhD students, because they are an excellent place to meet visiting scholars, speakers, and colleagues. The yearly Canada Milton seminar, which is organized through the CRRS, was especially valuable for my work because it gave me the chance to meet the leading researchers, not only in Milton studies but in 17th century studies generally.

Can you describe your postdoctoral work at the Tel Aviv University?

I will be an Azrieli international postdoctoral fellow at Tel Aviv University, under the supervision of Prof. Noam Reisner. The project will address the relationship between anti-Trinitarian theology and early liberalism in the works of Hugo Grotius, John Milton, and John Locke. The term “anti-Trinitarianism” describes a collection of Christian heresies which denied the divinity of Jesus. Instead of seeing him as a divine son of God, they saw him as a creature – either a human prophet or some more privileged person, but in all cases a creature. In the 16th and 17th centuries, anti-Trinitarians began to attract a variety of European intellectuals, including Grotius, Milton, and Locke, among many others. These writers went on to influence several key concepts, such as religious tolerance and freedom of speech, which later came to be seen as the hallmarks of liberalism. I will explore the relationship between these writers’ anti-Trinitarian sympathies and the political positions for which they are better known today.

What attracted your interest towards anti-Trinitarian origins of liberalism?

I was attracted to this topic initially because I did some work on John Milton’s anti-Trinitarianism for my dissertation. As I researched the subject further, I learned that Grotius and Locke were also attracted to this religious position, and that all three of these writers are thought to have drawn upon anti-Trinitarian arguments to espouse religious tolerance and what might be described as a humanist understanding of Christianity. Intriguingly, historians have suggested that anti-Trinitarianism was in part a result of interfaith exchanges between various heretical Christians, as well as Jewish and Muslim theology. However, I found that much of the best criticism on this field is being done in history rather than literature departments. As a result, the topic was a natural fit for me because my research explores how literature helps to mobilize religious rhetoric for political ends. In other words, I want to explore not only what these writers argue, but also the literary or rhetorical form that they give to their arguments. Rhetoric and literary form bridge the religious context with the political positions adopted by these writers.

If your research proves that interfaith dialogue came first before liberalism, how significant will it be for academic society?

The significance of this topic is that it helps us see religion and secular life as categories with shifting boundaries, especially in the early modern period. Today, we sometimes think of religious tolerance as a byproduct of secular liberalism. However, if anti-Trinitarianism really did contribute to early forms of liberalism, perhaps the boundary between the religious and the secular was more porous in the past than it is today. Perhaps we need to revisit the intellectual exchanges within and between the Abrahamic religions in order to fully defamiliarize the early modern period, and through this defamiliarization come to a better understanding of our own historical moment.

Ultimately, I see this project as an effort to ask the kinds of questions that might estrange both past and the present.