From defying the Taliban to studying at U of T: Afghan refugee shares her story 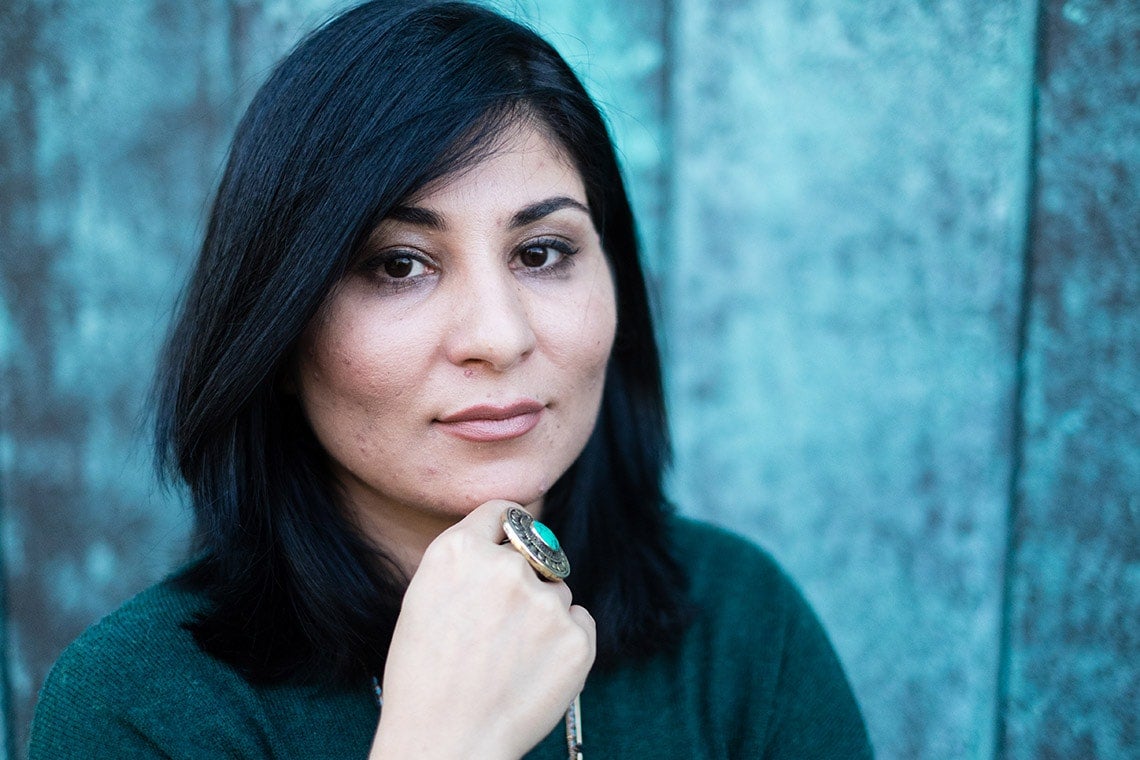 Robina Aryubwal, who left Afghanistan with her family after being threatened by a warlord, studies philosophy, political science and French at U of T Mississauga (photo by Geoffrey Vendeville)

When the Taliban took over Kabul, they forbade girls from going to school. There would be serious consequences for disobedience, but that didn't stop Robina Aryubwal and her family.

At home in their Soviet-era apartment, she continued her studies in secret and helped her parents teach other girls and women. The Aryubwals asked students to show up at different times to avoid arousing suspicion. Her mom, a former teacher, taught reading and writing, while her dad taught math. Robina gave lessons in English.

Ruby, as she's known, was 14 and sometimes taught women twice her age. Her students were so eager, she says, that when it came time for her to cook, they followed her to the kitchen to wash potatoes and onions while reciting English words.

“Even the children of the Taliban, they were coming to learn,” Robina recalls. “It inspired me, seeing the excitement in their eyes.”

The teenager who once risked her life to study in secret can now spend hours in the quiet study area of Robarts Library, surrounded by hundreds of other students sweating over papers and cramming for exams. These days one of her biggest worries is submitting an essay comparing Locke and Rousseau on time.

Her family’s past and their eight-year struggle to come to Canada are documented in CBC journalist Carol Off’s new book, All We Leave Behind, a finalist for the Governor General’s Award.

Read about the Aryubwals in the Toronto Star 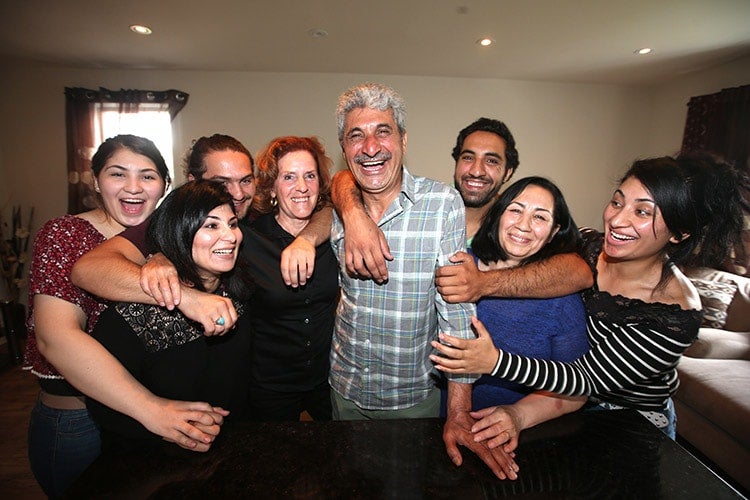 Asad Aryubwal, centre, in the family's Toronto home with his family and the CBC's Carol Off. From left: Hossna, Robina, Mujeeb, Off, Muhammad, wife Mobina and Hossai (Vince Talotta/Toronto Star via Getty Images)

Off and the Aryubwals met in Kabul in 2002, not long after the Taliban had been driven out and schools reopened. “Ruby was so spirited and full of life that I could not imagine how the Taliban could have kept her suppressed for so long, or if she could have continued with that kind of oppression,” Off says by email.

Robina, who had taught herself English, acted as a translator for the other family members.

Off interviewed Robina's father Asad about life under the Uzbek warlord – and later vice-president – Abdul Rashid Dostum. Asad guided Off and her crew on a tour of Dostum’s fiefdom in northern Afghanistan. During the civil war in the 1990s, the Aryubwals had lived in northern Afghanistan, Dostum’s territory, which was safer than other parts of the country. Asad had run a wholesale business but said he was conscripted into Dostum’s army. Although he had held the rank of general, Asad was nothing more than a “glorified gofer,” Off says.

“Dostum has a reputation of brutality that few warlords in Afghanistan can rival,” says Aisha Ahmad, an assistant professor at U of T Scarborough and author of Jihad and Co. The U.S. put Dostum and other strongmen on the payroll and used them as weapons against the Taliban, she added.

“In an expedient battlefield calculation, the international community empowered the most brutal warlords on earth,” Ahmad says.

After surviving the Taliban, Asad and his wife Mobina hoped to raise their family in peace but felt western countries’ support for warlords could only lead to more violence, Off says. He spoke out against Dostum and helped the Canadian journalists – a fateful decision that put his family at risk.

For Robina, meeting Off and her then-CBC colleague Heather Abbott (now at CBS) was a revelation. Even before meeting the Canadians, “I wanted to be a strong woman and do something big for other women," she recalls. “I realized whatever was in my mind about women was the right thing. They weren’t crazy ideas.”

When Off returned to Afghanistan four years later to see how things had changed, Asad spoke his mind again. As a result, Off writes that a senior officer in Dostum’s command warned Asad after the second CBC documentary aired: “If you want to live, then you must go.” Not for the first time, Asad fled to Pakistan and his family followed.

Off didn’t learn the full extent of the family’s predicament until she travelled to Pakistan in 2008 to report on the election after Benazir Bhutto’s assassination. In a hotel in Islamabad, Asad filled her in. Although he understood the consequences of denouncing Dostum, he wouldn’t have been able to face his children if he hadn’t, he told her.

Until she met the Aryubwals, Off had a traditional view of her profession: Journalists are meant to report objectively and with detachment. But when she saw the family again in Pakistan, she knew she “was about to cross the line that artificially separates a reporter from the story,” she writes.

Together they tackled the process for applying for refugee status and resettlement in Canada. The family filled out reams of paperwork and went for long interviews with UN and consular officials. The UN Human Rights Commission office confused Asad's file with someone else's, which led his first application to be rejected, Off says. Over the years, Off and the family comforted each other and celebrated birthdays, graduations, weddings, Christmases and Eids.

Finally, after many hardships, the Aryubwals arrived at Pearson International Airport in 2015.

The priority for Robina after coming to Canada, as always, was to continue her education. Off and the sons of her friend Naomi Duguid, who are both U of T graduates, were keen to help.

“She combines a first-class mind with extraordinary intellectual curiosity,” says Dominic Alford-Duguid, a U of T graduate in philosophy who's now at King's College London. 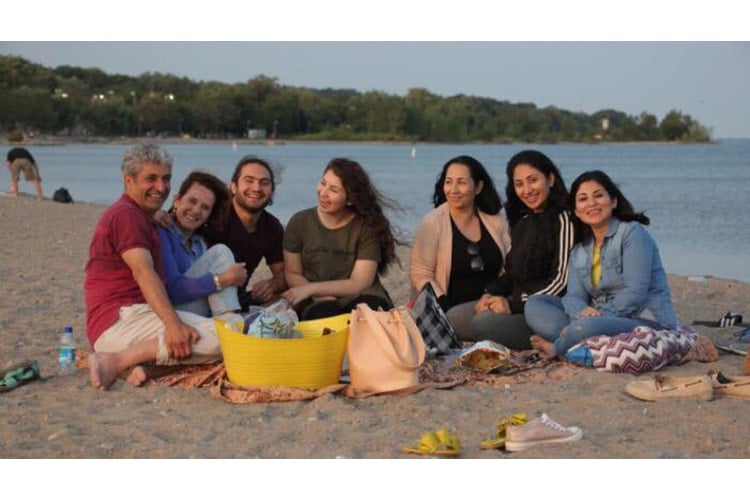 The Aryubwals and Carol Off picnic at Woodbine Beach. From left: father Asad, Off, Mujeeb, Hossna, mother Mobina, Hossai and Robina (photo courtesy of Robina Aryubwal)

In Afghanistan, Robina had finished high school as the top student and also studied in law and business schools, Off writes. Although those post-secondary institutions weren't recognized by U of T, Loretta Neebar of the U of T Mississauga registrar's office offered to help.

Then came one of the happiest days in Robina's life in Canada. She had to re-read the acceptance email from U of T three times before she believed it. “Everyone started crying – my mom, my dad, everyone,” Robina recalls. Soon more congratulatory emails followed – from Off, her husband Linden MacIntyre and faraway friends.

One day, she, Off and her family went on a walk through the U of T downtown Toronto campus, among the mix of Victorian, Gothic and Brutalist buildings. “It had such a big effect on everyone,” Off says in an interview, “the feeling that this beautiful institution was accessible to them.”

Off texts Robina every week: What’s going on with your studies? How is your family? Are you getting exercise? “Now I have two mothers,” she says.

Listen to Robina Aryubwal and Carol Off on CBC's The Current

After U of T, she hopes to continue her studies in law school and maybe practise international or immigration law. Her first month at a shelter for refugees in downtown Hamilton and her own experience showed her the problems facing many newcomers to Canada. Once she has a law degree, she hopes she will be able to help them.

“I know that Ruby is going to kick ass,” Off says. “And yes, she will be a lawyer. And yes, you will be hearing about her in the years to come.”

Robina doesn’t rule out moving back to Afghanistan, even if some of her friends say Canada is her home now.

“I’ll help wherever I get an opportunity. I’ll help everyone, all over the world.”