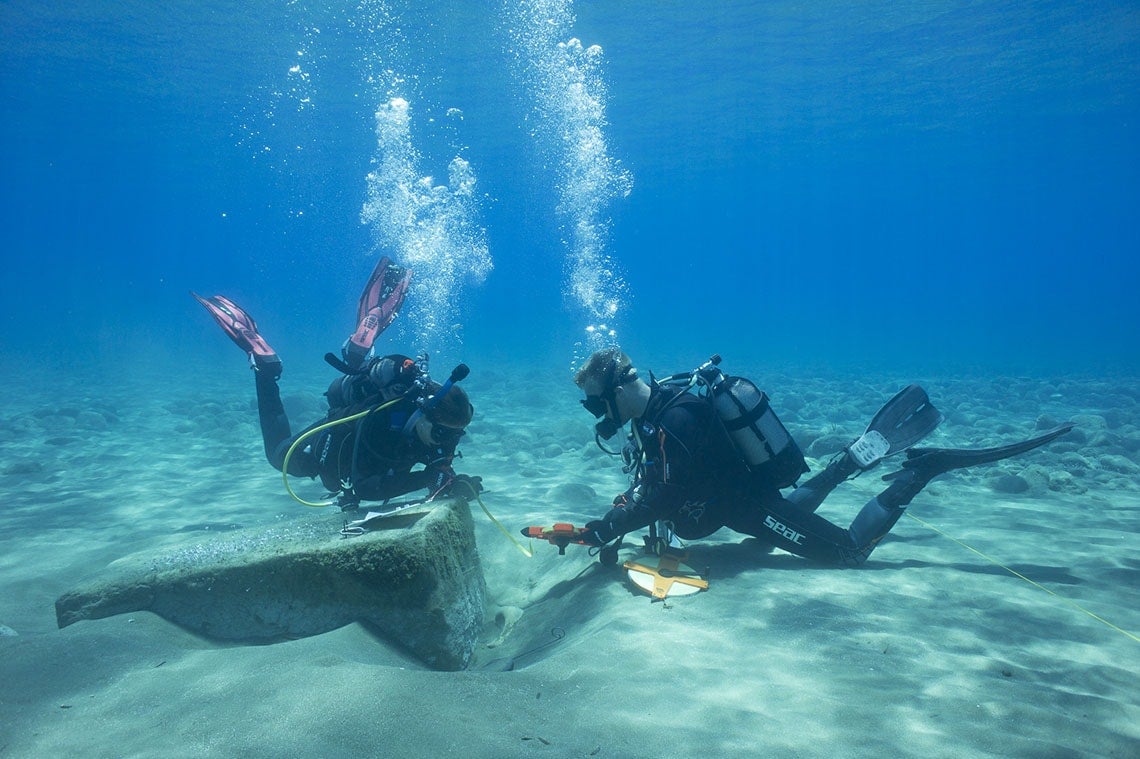 Many of us dream of spending the summer on the water, but for University of Toronto archaeologist Carrie Fulton, it’s just another day on the job.

Fulton, an assistant professor of historical studies at U of T Mississauga, recently completed the first season of field work in a three-year study of an ancient marine site off the coast of Cyprus. Fulton and her five-member research team conducted daily dives in the Mediterranean Sea, searching for signs of ancient trade routes.

Fulton studies trade networks in the ancient world, focusing on the Mediterranean region from the late Bronze Age to the early Roman period between 300 BC and 300 CE.

“I’m thinking about that transition in history and how movement of material objects reflects those transitions,” says Fulton. “In particular, I’m curious about how we can look at cultural interactions by studying how objects were moved, and how cultural ideas were embedded and changed as objects moved across different regions.”

Fulton’s current research focuses on Maroni-Tsaroukkas, an area off the south-central Cypriot coastline where ships have anchored for hundreds of years. She studies the stone block anchors left behind by the ships, looking for clues about how trade networks operated and changed over time in the region. “This area of the coastline was used from the late Bronze Age through to the Roman period,” says Fulton (pictured left).  “That represents interesting and challenging questions for us in underwater material. How do we determine the differentiation of use of these anchorages in different periods? These anchorages also interact with sites on land. What can that tell us about the types of goods being moved?”

In some ways, Fulton’s survey sites resemble a typical archaeological site on land. Her team, which includes U of T graduate student Naomi Neufeld, uses strings and stakes to define the survey area, and keeps detailed photographic records of their finds. But they do it all in full scuba gear, toting dive slates and other underwater equipment to the sea floor.

The anchors – stone blocks with holes that would have been looped through with rope – lie on the seabed about 20 metres below the surface. “It’s thought that they were thrown overboard, and retrieved, but some of these are massive,” says Fulton. The blocks range in size from 20 centimetres to close to a metre in size, and weighing up to 160 kilograms. “It would have taken multiple people to move these, possibly using a winch,” she says. “Ships would carry many of these to deploy as needed, [and they would have] to cut the line if it couldn’t be retrieved.”

The team typically dives for about three hours every day, beginning at 6:30 in the morning, and sometimes contending with half-meter waves created by the coastal winds. “We systematically survey the area by swimming back and forth, searching for pottery and other cultural material near the anchors that can give us clues into the frequency of use of the site or the types of materials being transported,” says Fulton.

Because they leave their finds in situ, Fulton’s team has been testing a camera system custom-designed for digital recording of the anchorage sites.

“The camera is enclosed in underwater housing and is attached to a microcomputer that records depth, position and allows us to take the photos from the camera and stitch them together into a 3-D rendering that we can manipulate,” says Fulton. “That helps to preserve the underwater environment. Over several years, we can see changes in the visibility of the anchors and have a more comprehensive record of the anchorage.”

“Most of what we are seeing belonged to transport vessels of some sort,” says Fulton. “The other thing that we’re finding are large architectural blocks that weigh up to one tonne. They are similar to a type of masonry used in the late Bronze Age for elite architecture. Would these have been going to some elite building, or was it part of an anchorage system, or evidence of Roman or modern looting of late Bronze Age sites? Next summer, we’ll excavate around them and lift them up. I hope we’ll find clues about what they were used for."

Fulton’s work is funded by the Honor Frost Foundation and U of T Mississauga’s Research and Scholarly Activity Fund.