Decisions, decisions: Toronto Experimental Economics Lab at U of T studies how and why we make choices 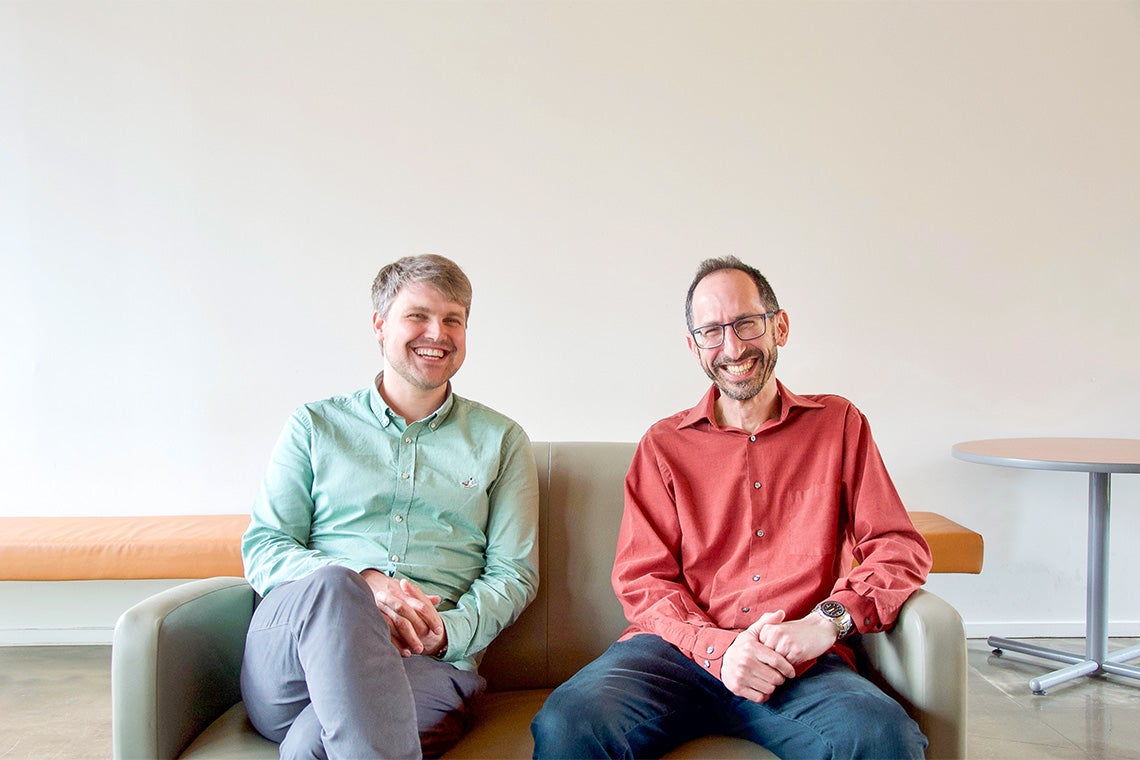 Post-doctoral researcher Johannes Hoelzemann (left) and Yoram Halevy, director of TEEL and a professor in U of T's department of economics (photo by Diana Tyszko)

To understand how people behave in games or markets, economists build mathematical models that aim to explain or predict choices and outcomes. For example, the consumer decision-making process can be analyzed through a model that factors in buyers’ beliefs and preferences and then predicts how they’ll act.

But how do we know if these models and their predictions are accurate?

At the Toronto Experimental Economics Laboratory (TEEL) in the University of Toronto’s department of economics, researchers are testing models of decision-making by placing real people in a controlled laboratory setting.

Recruiting mainly undergraduate students to participate in their experiments, TEEL asks subjects to complete a variety of decision-making tasks under carefully designed, rule-bound constraints that simulate games and markets so that researchers can examine things like choice, risk, self-control, temptation, altruism, loss aversion, competition and rationality.

“We’re trying to identify and learn about forces and regularities in human decision-makers,” says Yoram Halevy, director of TEEL and a professor in the department of economics in the Faculty of Arts & Science. “Certainly, there are limitations – for example, students are not a wholly representative sample – but what we’re doing is a very good start.”

Once considered a discipline dealing mainly with naturally occurring data, economics has diversified its toolkit in the last few decades with the use of experimental methods.

“Economists didn’t always have the tools to do controlled studies like one might do in the hard sciences,” says Halevy. “So, experimental economics was introduced in the last 50 years or so to bridge this gap. Doing a controlled study allows us to not only confirm the building blocks of our models, but to establish causality – the reasons why people make certain decisions.”

In contrast to studies involving human subjects where participants are paid a flat rate for their time, TEEL pays subjects for their specific choices, not just for participating in the experiment.

“We want to incentivize subjects monetarily so that they act in their own best interests, whatever their interests might be,” says Halevy. “It might not only be selfish interests. It could be altruism, for example – as long as they understand what the set-up is. We never fool them.”

That’s the difference between experimental economics and other disciplines that also test human subjects, like psychology or marketing: TEEL’s subjects are never deceived.

“Deception isn’t always a bad thing in experiments,” says Halevy.  “It can give you a lot of information. But if you deceive subjects once, next time they will be suspicious. So, our method creates ongoing, long-term trust between experimenters and subjects.”

The lab’s subjects – mostly students from across campus, although anyone can register – aren’t the only ones performing decision-making tasks: Arts & Science undergraduates studying experimental economics and game theory are also given first-hand experience in the testing environment.

Post-doctoral researcher Johannes Hoelzemann, who runs the lab and works with Halevy, makes sure to give his students direct experience in the tests they’ll study when the results are in.

“My students not only ‘do math’ or learn about prominent theoretical models in game theory, they actually experience our games first-hand, which trains not only their strategic and logical thinking, but also their empathy,” says Hoelzemann. “By experiencing certain strategic forces first-hand, they start to wonder: ‘Why do we behave in this particular way even though we could or should do something else?’ This helps students to understand economic, social and political phenomena.”

Halevy arrived at U of T in 2017 after 18 years as a faculty member at the University of British Columbia, and support for establishing TEEL is part of what brought him here.

“The fact that the department prioritized our lab shows the value the faculty and administration place on developing this field,” he says.

Over the past year, TEEL has been working hard to ramp up its recruiting and the effort is paying off.

“People come not only because they want to earn some money but, in my experience, they think it’s actually fun,” says Halevy. “Nobody has complained that it’s boring. You watch people, you see how they are interested in problems that don’t have a right or wrong solution. You learn something about the way you think.”

For a relatively young field, experimental economics has made significant contributions to the ways scholars understand human behaviour — something economists used to assume was based on the concept of rationality.

One of the questions Halevy and his collaborators are most interested in right now involves the long-held assumption that individuals are rationally acting to maximize something they want. Halevy and his colleagues think maybe people are not maximizers as much as they are rule-followers.

“We’ve done some research that lets subjects choose the ways in which they make decisions. Do you want to make decisions yourself, as if you are maximizing utility, or would you rather use some kind of rule, which you designed or got from a limited set of rules?"

The result: Most people are rule-followers.

For example, if you go to a coffee shop in a new country you are visiting, you may consider every available type of coffee beverage in the café. Or, you can use a rule such as: “I want to keep drinking the same type of coffee with milk as I do at home, so I will try to find ‘my’ café latte.” An alternative rule could be: “Try completely new types of coffee beverages that contain milk; for example, cappuccino, macchiato or flat white,” and so on.

In either case, you might not consider all available drinks. Similar logic applies to other important domains in real life such as, say, the financial decision-making that affects an individual’s long-term wealth.

“Decision-making is hard work, but we tried to eliminate laziness as the sole explanation for rule-following. We’re pretty convinced now that this is something more basic than simply laziness; humans seem to be using procedures or algorithms to make decisions.”

The implications are compelling, not only for economics, but other areas of inquiry such as psychology, cognitive science or artificial intelligence.

“It seems humans think in a way that is closer to how computer scientists think about AI or algorithms,” says Halevy. “We are analyzing not only decisions, but decisions about decisions.”