Cristina Amon reappointed Dean of U of T Engineering 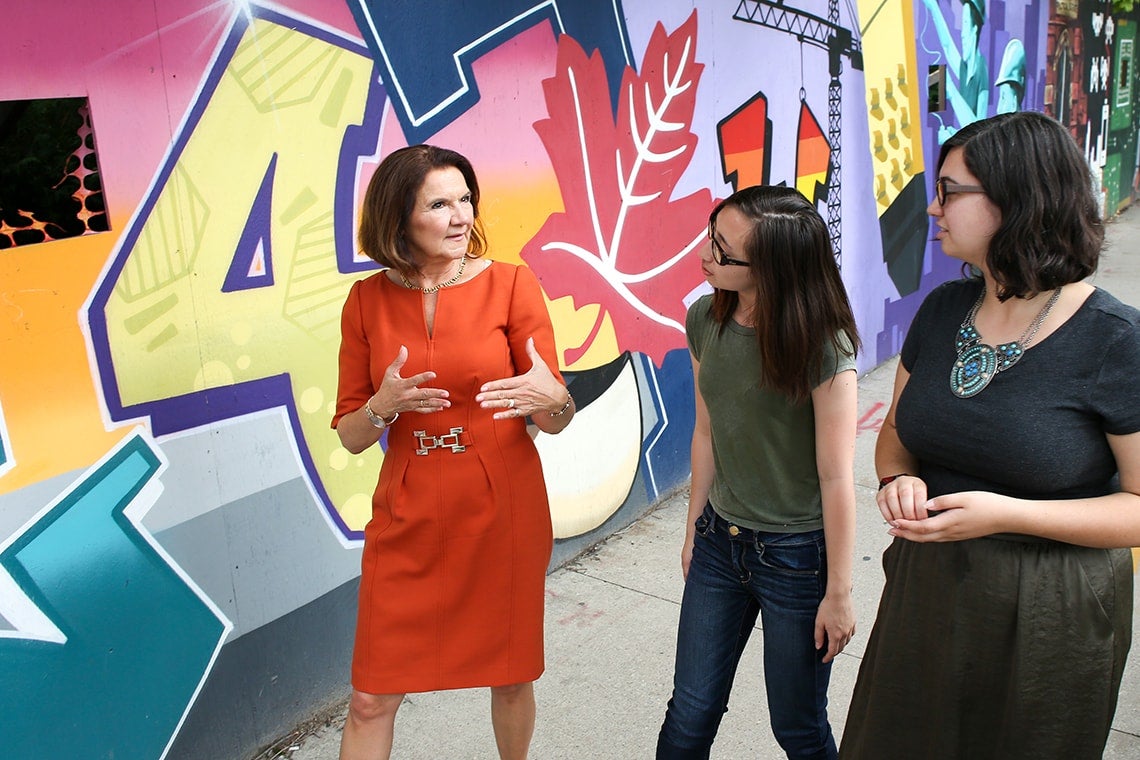 Dean Cristina Amon talks with students at the site of the new Centre for Engineering Innovation & Entrepreneurship, a vibrant hub for engineering education, innovation and commercialization by entrepreneurship (photo by Roberta Baker)

Professor Cristina Amon has been reappointed as Dean of the Faculty of Applied Science & Engineering at the University of Toronto for a special third term to June 30, 2019.

In addition, Dean Amon will serve in the role of Provostial Advisor on Women in Science, Technology, Engineering and Math (STEM) at the university for the period of July 1, 2017 to June 30, 2018. In this new role she will be advising Professor Cheryl Regehr, U of T’s vice-president and provost, on matters related to women in STEM at the university and will work with the vice-provosts and divisions to develop strategies for recruitment, retention and professional development.

“With a relentless pursuit of excellence, Dean Amon has taken the country’s premier engineering school to new heights, and will lead the Faculty of Applied Science & Engineering through the opening of its vibrant new facility,” said Professor Regehr, chair of the reappointment committee. “We are delighted that she will serve a third term and see the faculty’s vision for the highly anticipated Centre for Engineering Innovation & Entrepreneurship become reality.”

Under Dean Amon’s direction the Faculty has risen to preeminence among the world’s engineering schools. Central to this achievement is a sustained focus on multidisciplinary education and research collaboration that addresses key global challenges from improving human life to sustainably meeting our growing energy needs.

Her leadership has been the catalyst in many new cross-faculty research hubs such as the Institute for Sustainable Energy,  the TRCHR Transitional Biology and Engineering Program and the Centre for Global Engineering, which bring researchers across the faculty and university together with like-minded experts from around the world, sparking new ideas, discoveries and innovations. The integrated approach provides rich experiential learning opportunities for undergraduate and graduate students, enabling them to apply strong technical, leadership, communications and design competencies to develop global fluency and address the 21st century’s most pressing challenges.

Widely regarded for her strategic leadership, Dean Amon developed a collaborative vision for the faculty guided by a comprehensive Academic Plan. To achieve these goals, she built a highly effective academic and administrative leadership team and established new offices to oversee cross-disciplinary programs, honours and awards, strategic communications, corporate and industry partnerships, and advancement. She has fostered a strong sense of community and pride within U of T Engineering and nurtured a culture of philanthropy at all levels: since the 2011 launch of Boundless: The Campaign for the University of Toronto, the faculty has surpassed its $200-million goal, including more than $80 million secured for the forthcoming Centre for Engineering Innovation & Entrepreneurship.

Dean Amon has also fostered a rich culture of diversity and inclusivity among U of T Engineering and within the profession: U of T Engineering’s first-year class reached 40.1 per cent women in 2016, the highest proportion in Ontario. This increased the overall proportion of women across all U of T Engineering undergraduate programs to more than 30 per cent. With enhanced recruitment and outreach strategies, the first-year figure has nearly doubled during her tenure, up from 20.2 per cent in 2006. In the same period, the number of women faculty members has more than doubled from 21 to 55. With these advances, U of T Engineering is driving Engineers Canada toward its ‘30 by 30’ objective: 30 per cent female representation among newly licensed engineers by 2030.

Dean Amon spearheaded the creation of the forthcoming Centre for Engineering Innovation & Entrepreneurship (CEIE), currently under construction on the University of Toronto’s St. George Campus. The CEIE embodies U of T Engineering’s core values of excellence in collaborative research and experiential education. It will launch a new era for the faculty by providing flexible, dynamic spaces where students, faculty members and industry partners can meet, build prototypes and exchange ideas that lead to new ventures. With a 500-seat auditorium, Technology Enhanced Active Learning (TEAL) Rooms and fabrication facilities, as well as state-of-the-art sustainability features including solar panels and passive heating, the CEIE will serve as a vibrant hub for engineering education, innovation and commercialization by entrepreneurship. In 2016, the CEIE received an investment of $15 million from the Government of Ontario.

“We know that entrepreneurship is central to a vibrant and resilient economy in Ontario,” said the Honourable Deb Matthews, deputy Premier and Minister of Advanced Education and Skills Development for the Government of Ontario. “U of T Engineering’s excellence in undergraduate and graduate education, and the university’s access guarantee are making world-class programs accessible to a new generation of innovators who will drive our economy in every sector.”

In addition to her transformational leadership in the faculty, Dean Amon’s research advances the faculty’s standing as an international research powerhouse. Her pioneering work has resulted in 16 book chapters, more than 350 refereed articles and numerous keynote lectures worldwide. In 2015 she received the Ontario Professional Engineers Gold Medal and in 2016, the Engineering Institute of Canada’s Sir John Kennedy Medal, the institute’s highest honour. She has been inducted into the Canadian Academy of Engineering, the Royal Society of Canada, the Hispanic Engineer Hall of Fame and the U.S. National Academy of Engineering, and elected fellow of all the major professional societies in her field.