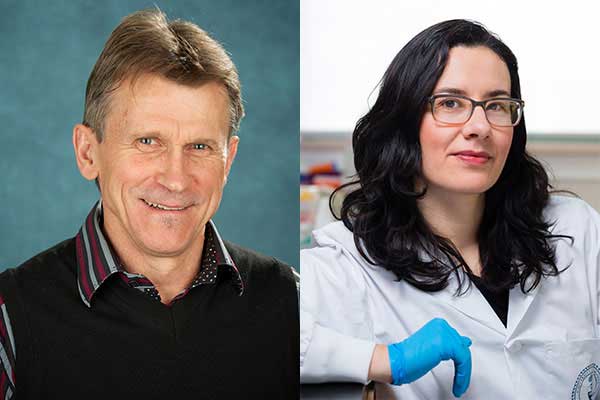 The funding will help train a new generation of experts in leading edge technologies, from more efficient data transfers for cloud computing to new treatments for disease based on lab-grown human tissues.

The two projects are led by Professor Peter Herman and Professor Milica Radisic.

Through Collaborative Research and Training Experience (CREATE) grants, each worth $1.65 million over six years, the research programs are designed to help train teams of highly qualified students and postdoctoral fellows from Canada and abroad. With the latest announcement, there are now eight CREATE grants active across U of T Engineering.

“Professors Herman and Radisic are leading innovative programs that address key challenges in communications technology and human health,” said Professor Ted Sargent, vice-dean of research in the Faculty of Applied Science & Engineering. “This support will help us nurture a new generation of engineering leaders who can bring solutions from the laboratory into the marketplace.”

Learn more about the projects below:

Herman’s research focuses on materials and techniques to control the flow of light. This includes fibre optics, which revolutionized telecommunications in the 1980s by replacing metal wires with faster, more efficient light-conducting fibres.

“Today, that same story is being played out in the data centres that power cloud computing,” said Herman. “Electronic cabling is becoming a bottleneck, and the wires can only be packed so closely before signals are interfering. If you can switch it over to optical, it will reduce the cost and allow more information to flow.”

Optics have many other applications as well: optical sensors are used to monitor bridges, pipelines and even airplane wings, providing feedback on when they need to be repaired or replaced. Optics also enable ever-smaller medical probes that can image the inside of the body and reduce the need for invasive surgery. In this way, guided light underpins the connectivity that will support the Internet of Things, a connected network of everyday devices, from clothing to appliances to vehicles, that can send and receive data.

“Jena is a world-leading place for optics research and manufacturing — they call it the City of Light,” said Herman. “We want to introduce our students, early on in their graduate studies, to the successful model they use to build links between academia and photonics companies. We will then follow up in Canada with links to Canadian optics industry.” The experience will help the students learn how to translate their discoveries into new products, either for existing companies or commercial ventures that they themselves will create.

Radisic and her team focus on growing human tissues outside the body. They recently unveiled the AngioChip, a system for growing realistic vascularized heart and liver tissues in the lab. These engineered tissues offer an effective way to test potential drug molecules and determine their effect on these organs, an application that is already being commercialized through the spin-off company TARA Biosystems. Eventually, they could be implanted into the body to repair or replace damaged organs.

The new funding will leverage the success of AngioChip’s commercialization. “In contrast to other CREATE programs that provide training through industrial internships, our training here will focus on developing a company,” said Radisic. “Our students will learn how to apply for patents, develop a business plan, make an effective fundraising pitch and more.”

Radisic doesn’t expect every student to create a startup, and she knows that not every new business succeeds. Nevertheless, she feels that entrepreneurship training for engineering graduate students is a critical part of building strong Canadian industries.

“The knowledge they gain will be transferable beyond their field,” she said. “In time, I expect to see them in roles like chief executive officer, chief scientific officer, senior scientist, consultants and IP specialists.”