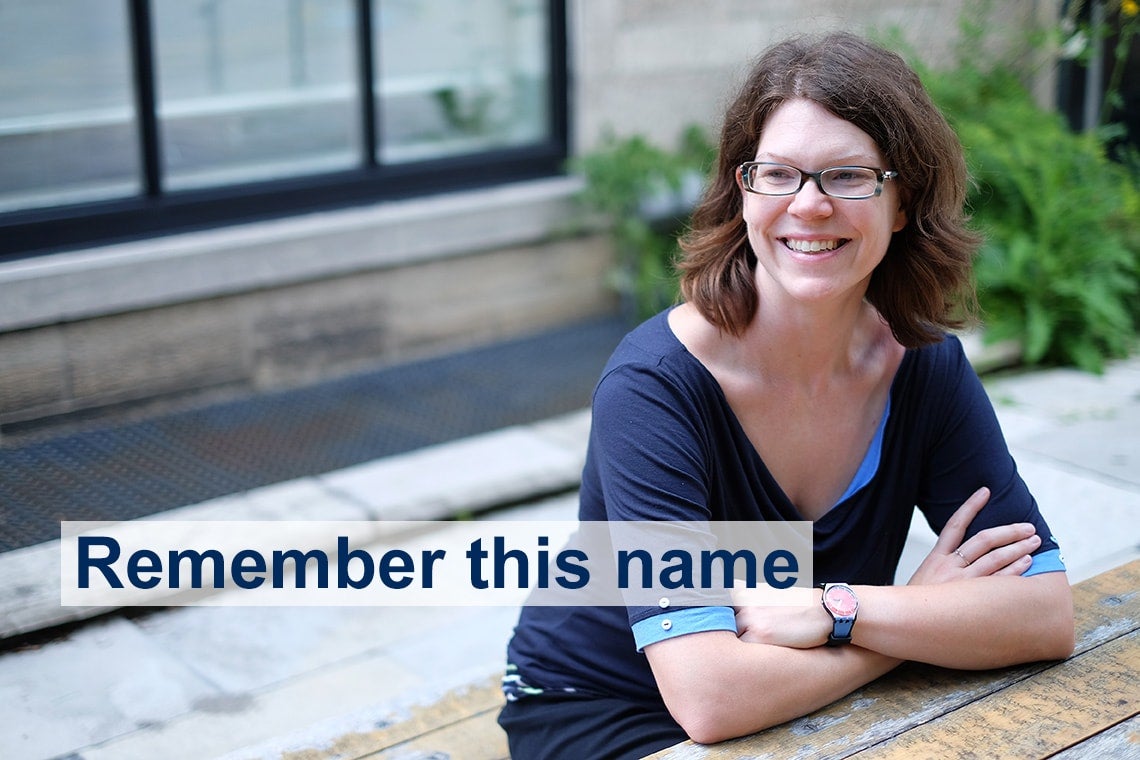 Laura Newburgh was inspired by Star Trek to boldly go where few men, or women, have gone before.

In high school, she read The Physics of Star Trek, which explains the science behind the TV series, including the differences between wormholes and black holes. The book stoked her curiosity about space.

In 2013, she took a fellowship at the Dunlap Institute to work on a radio telescope on the West Coast, which is intended to shed light on dark energy – a mysterious cosmic force that makes up 73 per cent of the universe.

She collaborated with U of T Assistant Professor Keith Vanderlinde to help build new radio telescopes that would yield a map of cosmic structure over the largest volume of the universe ever observed. Researchers say the data will help explain why the rate of the universe's expansion is accelerating.

Newburgh is part of a new generation of thinkers transforming research across the globe. They come from all corners of the world to do their PhD or postdoctoral research at the University of Toronto, drawn by the chance to work with the leading experts in their fields.

Now an assistant professor at Yale University, Newburgh discussed her research and time at U of T in an interview with U of T News.

How did you get into cosmology?

I stumbled into cosmology. I had decided to do physics in general after reading a book called The Physics of Star Trek when I was in high school. Most of the book is debunking warp speed and transporters and things, but there's a whole other last part of the book which is all about black holes, white dwarfs and compact objects and cool, fun things in cosmology.

That inspired me to do a physics degree in undergrad. I did a lot of research as an undergrad in different things: I did some astronomy, condensed matter and particle physics. I really liked being an experimentalist. I liked being in the lab, building instruments. I found out about cosmology at the end of my undergrad, and it united both my interest in big questions about the universe and being able to build instruments to study them.

Were you a big Trekkie?

I was, yeah. Not enough to go to conventions or anything, but I liked Star Trek a lot.

Do you speak Klingon?

What is it that fascinated you about black holes, white dwarfs and the universe in general?

I remembered seeing the diagrams of warping space time with black holes and that you could use general relativity to predict what would happen, and I think it was just captivating. It's so elegant that you can take these enormous objects that do the strangest things and describe them. That is extremely powerful.

Despite all of the measurements we've made about the universe, we still have a lot of fascinating open questions. We are still left with questions like: What is dark matter? What is dark energy? How did it all begin? Answering them is the most fun job in the world.

What did you specialize in?

My research focus was in cosmic microwave background (CMB) instrumentation. I did that in both my thesis work at Columbia University and my first post-doc at Princeton University. Those instruments are millimetre wave telescopes that are dedicated to the measurement of the CMB radiation – the first light that we see in the universe. The resulting measurements are the workhorses in cosmology and provide not just fascinating details about the early universe but also the basis for all other cosmology measurements we make.

The thing that brought me to Canada and U of T was the Canadian Hydrogen Intensity Mapping Experiment.

What we measure with CHIME is the distribution of galaxies out to extremely high red shifts, so very, very far back in time. The result of that is something we can turn into a constraint on dark energy models. The idea is to use a signature we know is there from other surveys to trace the expansion rate of the universe over time, and then use that to better understand the nature of dark energy and what models are relevant.

CHIME is doing this with radio measurements of galaxies. It's a very large radio interferometer built in collaboration with four institutions: U of T, McGill, the University of British Columbia and the Dominion Radio Astrophysical Observatory. It is built in four parabolic cylinders that look a lot like really large half-pipes. The reason that we have built this crazy instrument is that we have extremely high sensitivity to the cosmological signal we're interested in.

What did you think of your time at U of T for the Dunlap fellowship?

The wonderful thing about having the Dunlap fellowship is that it allowed me to be very independent. I had the opportunity to pick my own path and choose what I wanted to work on while I was at U of T.

It allowed me to focus on a part of CHIME no one was actively working on: to help calibrate the instrument better, which is essential to making the sensitive cosmological measurements possible. My fellowship at the Dunlap Institute gave me the resources to put together this separate calibration instrument, which was important for getting a faculty job later. It was a really unique opportunity, and I'm so glad I did it.

And what did you think of the environment at U of T?

I totally loved it. It was a really rich academic environment to learn all of the new things required for working in a completely new field, since I hadn't done radio astronomy or measurements of galaxies before.

What are you working on at Yale?

I'm continuing to work on CHIME to do these calibration measurements, the same sorts of things I was doing when I was at the Dunlap Institute. I also started working on this new facility for CMB observations called the Simons Observatory. We will build two new telescopes in Chile to make better measurements of the CMB, which should allow us to say lots of interesting things about particle physics and the early universe.

You said U of T’s location was part of its appeal. What did you think of life in Toronto?

The people here are really friendly, a bunch of the scientists would go out for beers on Fridays. One hard part of academia is you move every couple of years and have to rebuild your social life, so it was nice having a social atmosphere.

I liked the city a lot in general. I went to undergrad and grad school in New York, so I think there was an element of city life that I like. Everyone compacted into one place will inevitably mean good bars, restaurants, museums, parks. Ice cream. The food is good. Poutine is great. I guess that's a theme.

And of course, being right on the water was nice. I'm from Minnesota originally so when I'm near a lake, it feels like home.

Did you discover poutine in Canada?

Yeah. Maybe I only started noticing poutine in the U.S. after I moved to Canada, but I do not remember it being a thing more than three years ago. I'm glad it followed me though.