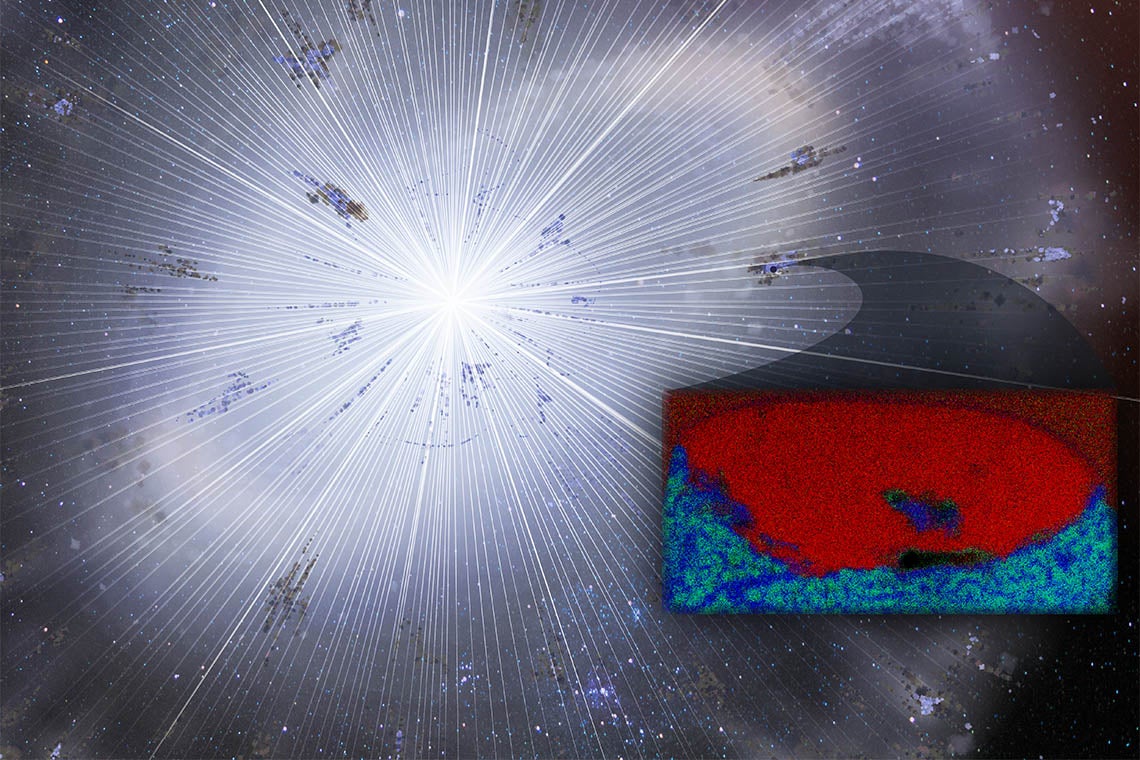 Researchers found a grain of stardust (inset image) that survived the formation of our solar system. The carbon-rich graphite grain (red) revealed an embedded speck (blue) of oxygen-rich material (illustration by Heather Roper/University of Arizona)

The study of a tiny grain of stardust – older than our solar system – is shining new light on how planetary systems are formed.

The microbe-sized extraterrestrial particle, which originated from a nova explosion more than 4.5 billion years ago, was discovered inside a meteorite collected in Antarctica by the National Aeronautics and Space Administration (NASA).

Alongside planetary scientists at the University of Arizona, the grain was studied last year at the atomic level by Associate Professor Jane Howe of the Faculty of Applied Science & Engineering while she was a senior scientist at Hitachi High Technologies.

“This grain is presolar,” says Howe. “It originated before the formation of the sun. It’s just amazing to analyze such an anomaly.”

Using advanced ion and electron microscopes, Howe and the researchers observed the arrangement of carbon atoms and its variants, known as carbon isotope anomalies, and discovered the presolar graphite grain contained oxygen-rich silicates – something they did not expect to see.

The researchers’ observation gives new insights into the conditions of a dying star. It also contradicts the scientific hypothesis that the two types of stardust material, oxygen- and carbon-rich – which are presolar building blocks in the formation of a solar system – could not form in the same nova outburst, under the same conditions.

The international collaboration, which includes Howe, planetary scientists, astronomers and material scientists at the University of Arizona, Washington University in St. Louis, Polytechnic University of Catalonia in Spain, and Hitachi High Technologies in the U.S. and Japan, published their findings today in Nature Astronomy.

“Sometimes research is about satisfying your curiosity. One of the greatest curiosities is how the universe was formed and how life started,” says Howe. “And this weirdo particle showed us something we didn’t know before.” Dr. Pierre Haenecour (left) of the Lunar and Planetary Laboratory at the University of Arizona and U of T Associate Professor Jane Howe, analyze images of stardust particles with Hitachi’s SU9000 low-voltage STEM/SEM electron microscope (photo courtesy of Maria Schuchardt, University of Arizona)

Howe, who joined U of T Engineering in January, is currently using her electron microscopy expertise to study materials to advance renewable energy, and also plans to expand her work to include meteoritic materials science research.

“I thought this research project was really exciting, and I’m a curious person by nature. At the time, it was just part of my job assignment, but now it’s starting to become part of my research portfolio,” says Howe.

She hopes to further her collaboration with researchers at the University of Arizona. In addition, she recently began a collaboration with Kim Tait, an associate professor in the department of Earth sciences who is also the senior curator of mineralogy at the Royal Ontario Museum, to study its collection of meteorites.

And, in September 2023 when the University of Arizona-led NASA OSIRIS-Rex mission returns to Earth after taking samples of carbon-rich asteroid, Bennu, Howe will be among the team of Canadian researchers to analyze its samples.

“This kind of research, it’s part of a much larger debate of how life started on Earth. We all care about who we are and where we came from,” says Howe.

“I’m so excited to be part of advancing our knowledge in this.”