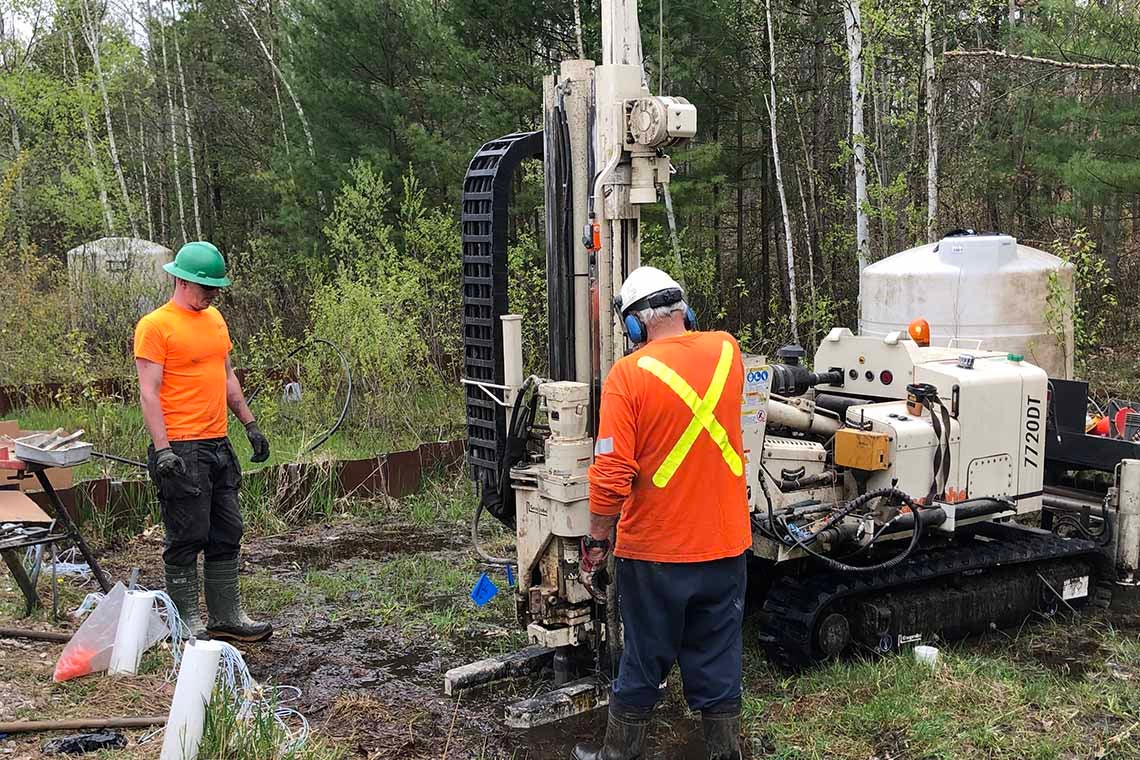 Technicians collect core samples from a hydrocarbon-contaminated aquifer near Barrie, Ont. U of T's Elizabeth Edwards and her partners have developed bacterial cultures designed to clean up such sites by breaking down contaminants (photo by Courtney Toth)

For years, the University of Toronto’s Elizabeth Edwards and her team have been developing a potent mix of microbes that can chow down on toxic chemicals. Now, they are preparing to let them loose in the wild for the first time.

The bacterial cultures are designed to treat a set of contaminants known as BTEX – benzene, toluene, ethylbenzene and xylene. BTEX chemicals are commonly found in soil and groundwater where crude oil and its products have been used, such as old gas stations and oil refineries. In Canada alone, such sites number in the thousands.

“If we can use this technology to make environmental remediation more effective over the long term, while also making it less costly to deploy, the result is that more sites will ultimately get cleaned up,” says Edwards, a University Professor in the Faculty of Applied Science & Engineering's department of chemical engineering and applied chemistry.

“That’s a win for everyone.”

One way to deal with BTEX contamination is to dig up the soil or pump the groundwater to the surface, where it can be exposed to oxygen. This encourages the growth of natural organisms that can break down the BTEX chemicals. But digging and pumping are energy-intensive and costly, which limits the number of sites that actually get treated.

By contrast, Edwards and her team have identified other strains of naturally occurring bacteria that can break down BTEX without access to oxygen, a process known as anaerobic degradation. These microbes can treat the soil and groundwater in place, but at most contaminated sites, their numbers are low.

More than 15 years ago, Edwards and her team extracted cultures of anaerobic BTEX-eating bacteria from several contaminated sites. Ever since, the cultures have been in an intensive training regimen: The team fed them BTEX, selected the samples that were most effective at breaking it down, and used those to inoculate the next generation. The result: a kind of ‘microbial A-team’ selected for fastest BTEX degradation.

In collaboration with SiREM, a spinoff company founded in 2001 on technology from the Edwards lab, the team has grown hundreds of litres of the faster BTEX-degrading cultures. Now, they’re launching a nearly $3-million public-private collaboration to test these cultures in the field.

The project’s contributors include Ontario Genomics, the province of Alberta, SiREM, Federated Cooperatives Limited, Imperial Oil Limited, and three universities – U of T, the University of Alberta and the University of Waterloo. Together, this team is set to deploy its secret weapon at three contaminated sites across Canada. The hope is that the enriched bugs will speed up the natural degradation of BTEX without the need to dig up and oxygenate the soil and groundwater, known as bioaugmentation.

One of the unique aspects of the project will be the use of highly specific genome-based monitoring tools to accurately track the role and fate of both the new organisms being introduced, as well as the resident microbial communities. By enhancing our understanding of which genes bacteria use to break down toxic chemicals – as well as how they work together to achieve complete degradation – the project will point the way toward even better bioaugmentation and bioremediation technologies in the future.

The collaboration has a track record of success. Edwards and SiREM previously commercialized a culture known as KB-1 (KB stands for “kick butt”). Developed using a similar approach, KB-1 is designed to break down chlorinated solvents widely used in dry cleaning and degreasing. Today, SiREM uses it at sites all over the world.

If the new trials are successful, SiREM plans to add the BTEX-degrading culture to their arsenal, which could help increase their share of the multibillion-dollar global market for biological treatment of contaminants.

“I’m excited to bring new academic and industrial partners to this project,” says Edwards. “It’s great that we have so many talented people willing to put their heads together to find a viable solution to this vexing problem.”