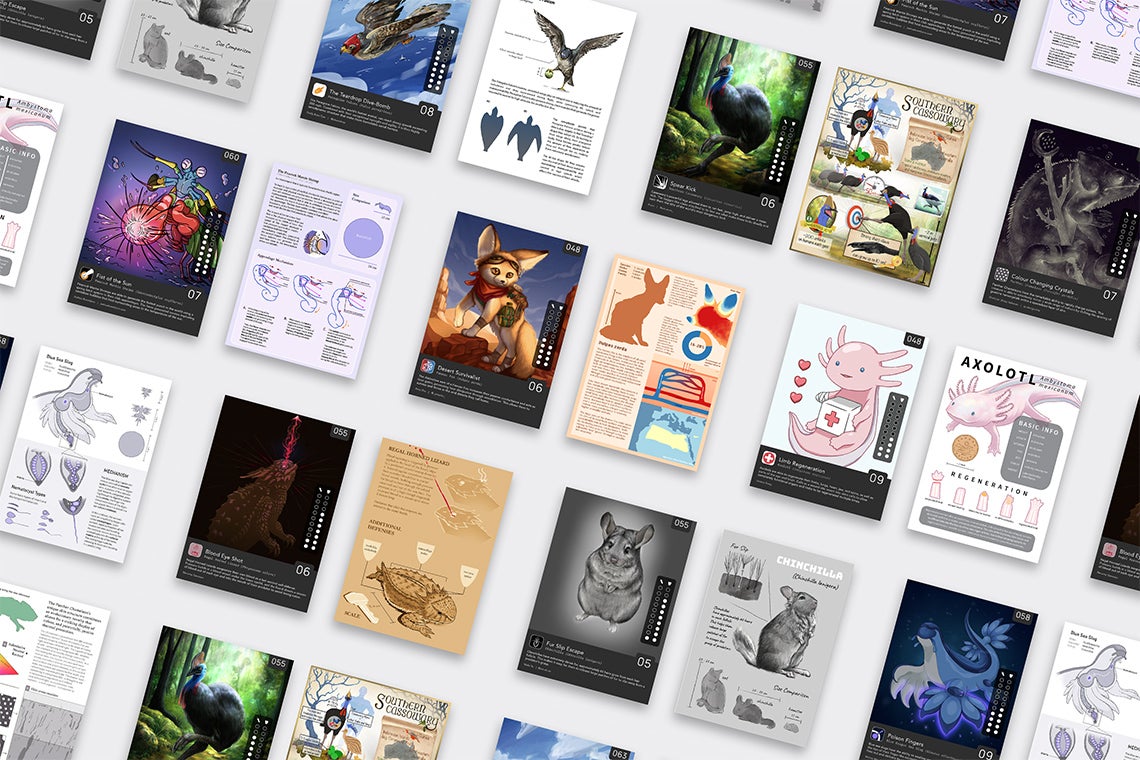 “The project began back in February 2021 when Michie and I were talking about ways we could collaborate as a cohort and involve other BMC students,” says Saharan, now a second-year student in the Master of Science in Biomedical Communications (BMC) program at U of T Mississauga.

BMC students are educated and trained in medical illustration and scientific visualization. Saharan, Wu and their cohort completed almost their entire first year online due to the COVID-19 pandemic restrictions.

“We felt like a lot of our projects were individual, so we thought, ‘Why not have a fun side-project that we could all contribute to and also get the incoming BMC students involved in?’” Saharan says. 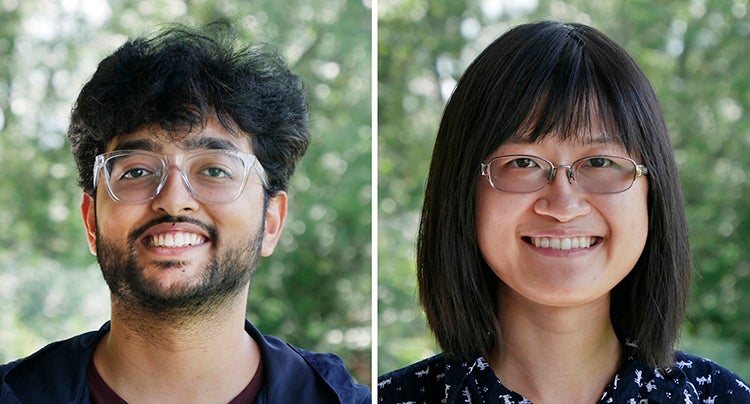 The SciCard Collaborative project is based on the idea of trading cards but with a BMC twist. Unlike Pokémon's imaginary creatures with magical powers, the SciCard “creatures” are real.

“Everyone could choose an animal, a plant or a molecule with some sort of special ability that can be explained by science,” says Saharan, who still owns a Pokémon collection of over 200 cards.

Each participant tackled subjects with seemingly impossible traits and then created cards for them. Participants were encouraged to illustrate the card fronts in their own unique, explorative and creative styles. The card backs had to explain the science.

Saharan chose to depict the panther chameleon, which can change the colour of its skin – an ability Saharan finds fascinating and wanted to learn more about.

"The front of the card was called Colour-Changing Crystals,” he says. “The back shows the different layers of the skin and explains how the structure within the skin allows different light to bounce off and cause that colour-changing effect. So, although it sounds very magical, there are interesting scientific properties to explain it.” 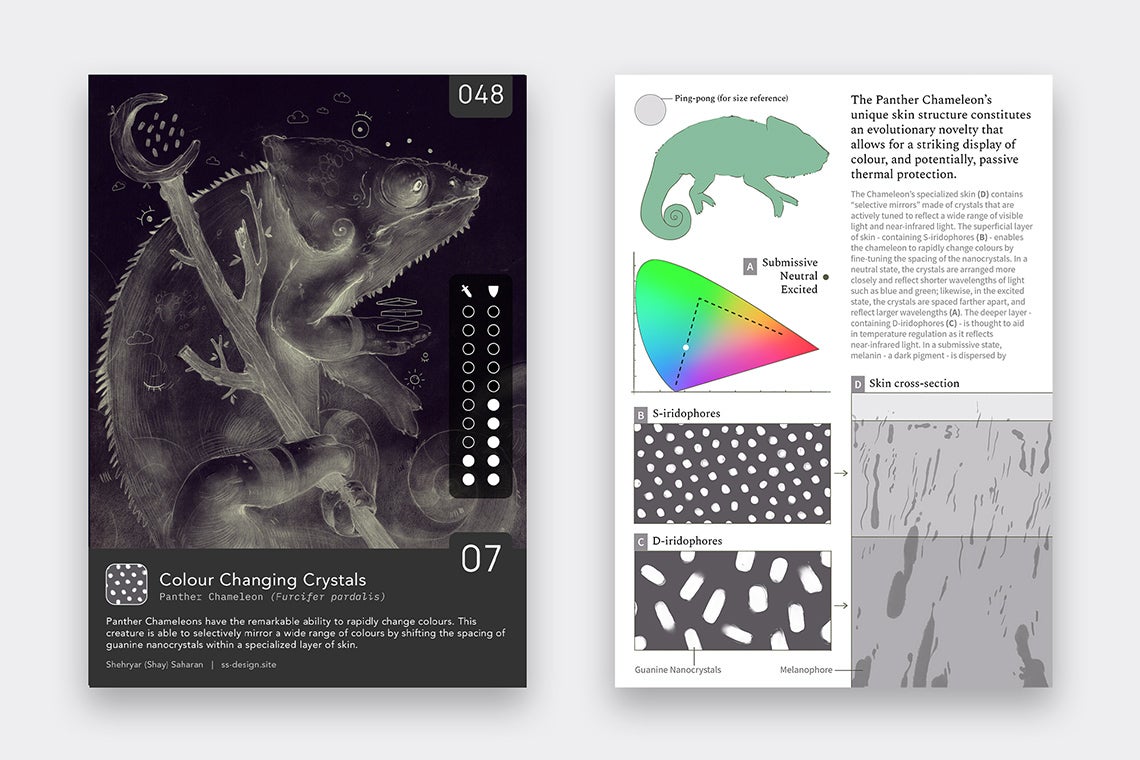 Shehryar Saharan rendered the panther chameleon in carbon dust and then scanned and inverted the image so that light and dark tones were switched, giving the Colour-Changing Crystals card a nocturnal look and emphasizing the “wizardly” nature of the chameleon (Image courtesy of Shehryar Saharan)

First-year BMC graduate student Anaïs Lupu hadn't yet started the program when she received an invitation from Saharan and Wu to participate in the SciCard Collaborative project. “I was excited. I wanted to make a good impression and put my first piece out there,” says Lupu, a former Yu-gi-oh! trading card collector and, according to Saharan, a very talented artist.

“I did a detailed illustration in a [National Geographic] style,” says Lupu. Her card front is a realistic depiction of the deadly southern cassowary on a forest background. A pretty, blue, flightless bird, the Cassowary's special ability is its powerful kick. “This bird is buff,” she says. For the card back, Lupu chose to communicate the science through infographics rather than text.

Saharan and Wu organized online meetings for the SciCard participants where they presented their sketches and received feedback. Anaïs Lupu llustrated her card front in a realistic National Geographic style, using infographics to communicate the science behind the bird’s powerful and dangerous kick (image courtesy of Anaïs Lupu)

“We even met to vote on the strength of the special ability,” says Lupu.

Saharan describes the SciCard Collaborative project as a precursor to the program’s information visualization course and a chance to explore visual communication principles. “The stakes were low. It was just collaborative and fun and we all got to know each other in the process, too. So, that was really rewarding,” he says.

He says he hopes that, with a larger collection in the future, there may be an online archive of the artwork and even printed physical copies of the SciCards. For now, the digital files are stored within the BMC program.

Saharan says that he and Wu hope someone will take on the SciCard Collaborative project next year and recruit a new group of current and incoming students to participate.

Lupu may just be that someone.

“I want to do this again next year if it's offered,” she says. “If not, I'd like to borrow their idea and run it myself.”