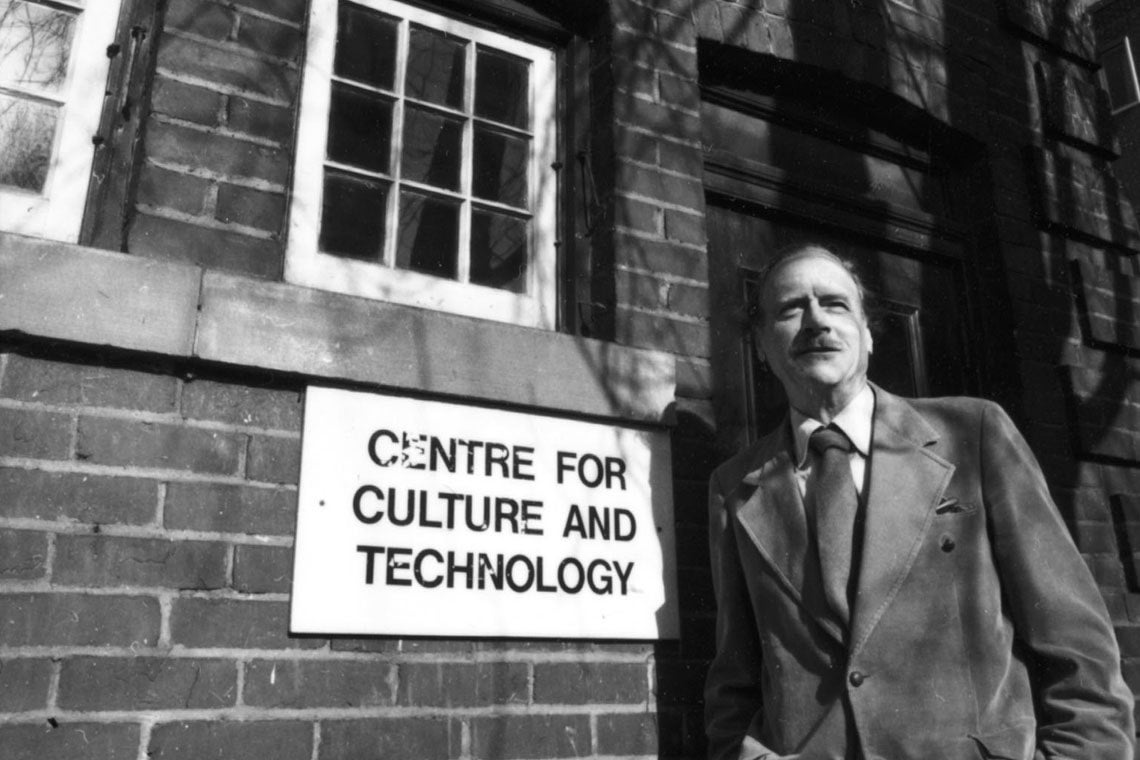 Marshall McLuhan outside the Coach House Institute in 1973

U of T’s Coach House Institute has long been associated with Marshall McLuhan, one of the university’s most famous professors. And now, the interdisciplinary institute in the Faculty of Information, is being renamed in his honour as the McLuhan Centre for Culture and Technology.

“It is fitting and appropriate to regard the base of McLuhan’s teachings as a McLuhan Centre,” said Faculty of Information dean Wendy Duff. “Back in the 1960s, McLuhan’s Coach House teachings stimulated and challenged students to fully use their creative imagination in understanding how we shape technologies, and how they, in turn, shape us.”

The name change comes about in the midst of renewed activities and extensive planning under the leadership of McLuhan Centre Interim Director Seamus Ross, who has engaged McLuhan Centenary Fellows David Nostbakken and Paolo Granata, and more recently McLuhan Program Director Sarah Sharma, with a goal of "developing opportunities to extend McLuhan’s formative insights on culture and technology to reach across new terrain, including a Toronto that is very different today than it was when McLuhan was writing,” according to Sharma.

Ross agreed, saying “the poetic probes and multidisciplinary approaches of Marshall McLuhan in the past century have emerged as prescient for our current rapidly changing world. The McLuhan name itself stands for the strength of creative inquiry.”

McLuhan's son, Michael McLuhan, said it “warms the heart” to see the legacy of his father’s work at the Centre enshrined by this renaming, where “so much foundational, ground breaking work was done in the emerging field of media studies.”

McLuhan spent his career as a professor of English at the University of Toronto. The McLuhan Centre preserves and honors his intellectual heritage by fostering and supporting innovative scholarship and interdisciplinary research in the broad field of humanities, according to the tradition of the so-called Toronto School of Communication. The centre had its beginnings when on October 24, 1963, John Kelly, president of St. Michael’s College, and U of T president Claude Bissell together decided to establish a Centre for Culture and Technology, which later became McLuhan’s office in the English Department at St. Michael’s College.

Read more about the history of the McLuhan Centre

The centre will be officially renamed at a conference later this year called “Toronto School, Then, Now, Next” celebrating and building upon the work of McLuhan, Harold Innis, Walter Ong, Eric Havelock, Northrop Frye, and Glen Gould, among others.