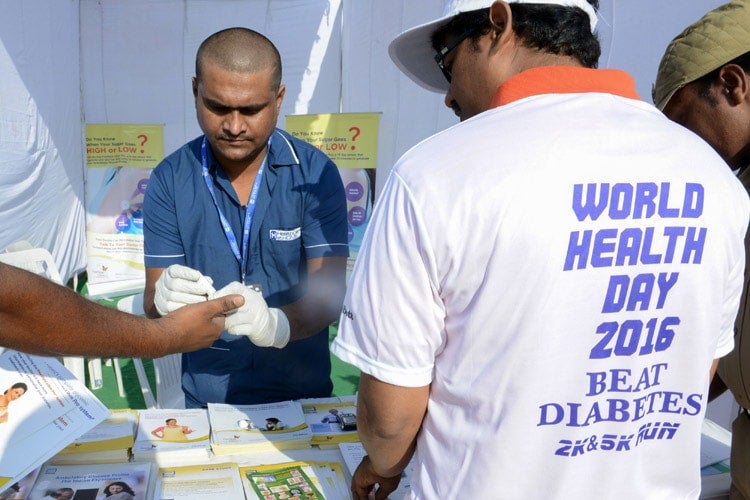 A nurse tests patients at a diabetic health check up camp in Hyderabad, India (Getty Images)

With more than 420 million people globally diagnosed with diabetes and rising, the demand has never been greater to predict, prevent and better treat this chronic disease.

Tracking – and blocking – an obscure, naturally occurring substance known as CMPF from creating havoc on pancreatic beta cells could be the key.

Already, Kacey Prentice, a U of T PhD graduate, and her partners, Professor Michael Wheeler and research associate Feihan Fay Dai of the department of physiology, have developed tests using CMPF to more quickly predict people at risk of developing diabetes.

That work was recognized on May 17 when CMPF was named one of four U of T Inventions of the Year. The awards, which recognize their uniqueness, potential for global impact and commercial appeal, were presented at the university’s third annual U of T Celebrates Innovation event in front of an estimated 200 guests, including Ontario Lt.-Gov. Elizabeth Dowdeswell.

“Having our work recognized by the university through this award is an incredible honour,” says Prentice. “Such amazing work is produced by the faculty and students at the University of Toronto every year that being selected among this group is a very humbling experience.

“The university was – and continues to be – a fantastic support system,” she continues. “We approached them in the early stages of our research and they helped us to develop the patent and identify industry collaborators who could support our work.”

The support and dedication of her university colleagues was critical when spending hours analyzing blood samples and planning experiments shut away in a lab. They relieved stress by bonding over a shared love of food, involving everything from lab potlucks to team lunches out on Baldwin Street.

They first noticed the importance of CMPF after measuring the byproducts of metabolism (sugars, fats and amino acids) in blood taken from women with gestational diabetes. When comparing those results with the blood of normal pregnant women, CMPF popped up.

It was the most altered metabolite produced by the women with gestational diabetes tested and had never been noticed in diabetes research before.

“Thankfully, I was able to purchase some purified CMPF from a drug company to test on beta cells in culture. When I demonstrated that CMPF impaired insulin secretion we knew we had found something of significance,” says Prentice.

Now, they’re working with industry partners and clinical collaborators to analyze blood samples from large, ethnically diverse populations to spot changes in their CMPF levels before they develop diabetes, as well as determining how it changes with diabetic status. And, they’re looking at ways to block the effect of CMPF to protect the beta cells in the early stages of diseases.

When asked what tips she’d give other researchers toying with the idea of commercializing their research, she says it’s important to not give into the fear that publishing papers becomes increasingly difficult, if not impossible, once work becomes commercialized.

“I think it is important to know that this isn’t necessarily the case,” Prentice says. “The university was incredibly supportive of our project and worked with us towards publication together with pursuing commercialization.”