From cloud particles to global warming: the numerical predicting of weather 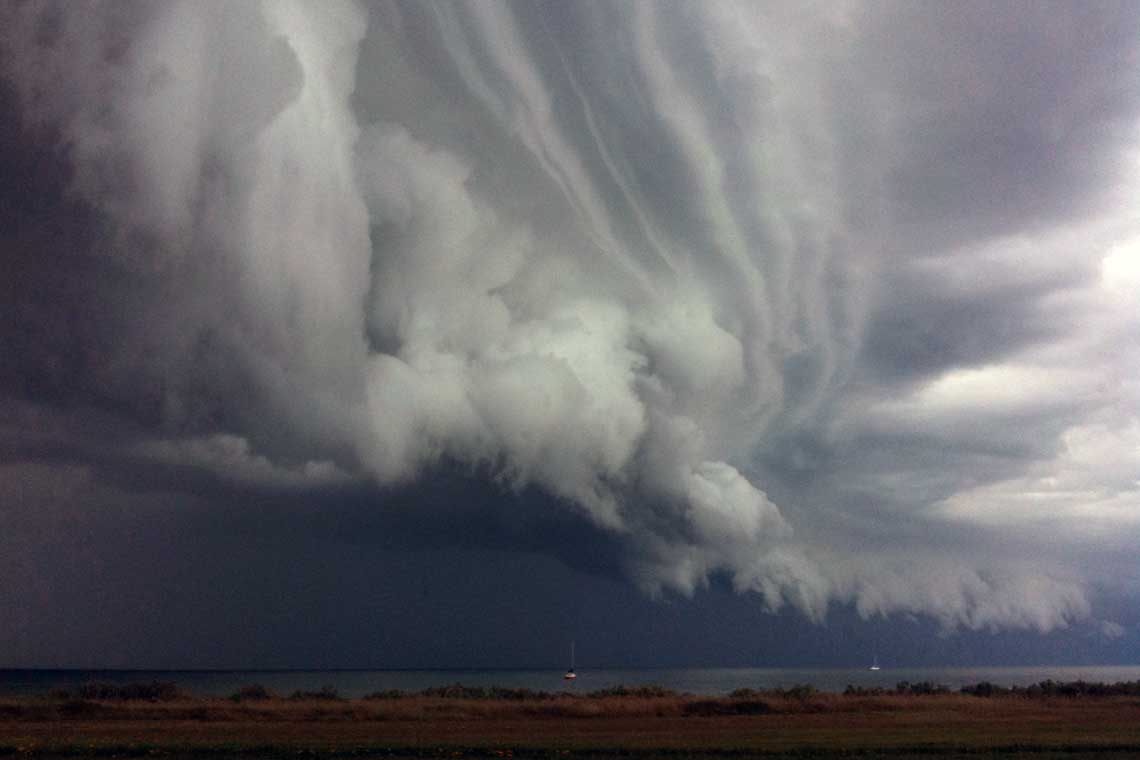 Whether you turn to the Farmer’s Almanac, a 24-hour weather station or an app on your phone, weather predictions are a constant source of fascination for Canadians.

For a greater understanding of the math behind the science, the Fields Institute for Research in Mathematical Sciences at the University of Toronto is hosting a talk by alumnus Howard Barker on April 28.

A research scientist in the Improving Climate and Weather Prediction Models section at Environment Canada, Barker’s lecture is entitled “Prediction of Weather and Climate: From Sub-millimetre Cloud Particles to Global Warming”.

Fields writer Peter Herriman spoke with Barker about his research and upcoming lecture.

(This interview has been condensed for length.)

How important is accurate numerical weather prediction?
If a numerical model predicts that a deluge is likely to hit downtown Toronto within the next three hours, well, little can be done about it. But with climatic change, as predicted by climate models, comes weather pattern change.

Conventional climate models cannot make detailed weather forecasts for specific regions such as, for example, the GTA. If, however, climate predictions can be used to confidently drive an Numerical Weather Prediction (NWP) model for several years at high resolution for Southern Ontario, we would presumably get an idea of rates of occurrences of extreme weather events, ranging from winter storms to thunderstorms to droughts, and thus when and where our infrastructures need to be upgraded or added.

How accurate were the forecasts for the weather we experienced in the winter of 2015-2016? How accurate were the “global” temperatures for winter and summer of the past year?
The weather was pretty much as expected across much of Canada. We had advance notice of the large El Nino and knew what to expect. March 2016 was the 11th consecutive month with a record high global monthly-mean surface air temperature. This in itself is a record for persistence, and is pretty much in-line with what global climate models have been predicting for the past couple of decades.

Regarding the slightly diminished rise in global surface temperatures over the past decade or so, relative to the previous decade, it appears to have been due to energy going into the deep oceans. Moreover, it seems as though mean temperature is on the rise again at a rate resembling those of the 1990s.

What’s changed in recent years for weather and climate prediction?
Beginning in about 2000, data from various platforms, most importantly satellites, have been assimilated routinely into NWP models. This operation updates the initial conditions of the model and has resulted in much improved forecasts across Canada and around the world. More, and novel, data will only aid the effort.

Likewise, representations of physical processes, such as cloud physics, convection, and turbulence, have improved over the same period and they help improve weather prediction but more so climate prediction.

The ultimate goal is to develop unbiased representations of physical processes, for persistent biases can be anathema to the overall integrity of long climate simulations.

Since the magnitude of the simulated system is truly global, it is imperative that our numerical models be assessed from a global perspective. The most cost-effective way to do this is with satellites; both research and operational satellites. There are now several geostationary satellites as well as technically advanced radars and lasers (i.e., active sensors) on polar-orbiting satellites that provide information pertaining to atmospheric profiles; as opposed to two-dimensional imagery which is what comes from conventional passive sensors.

The other important point is computers and networks that transfer information. Significant portions of many of the world’s largest and faster computers are devoted to weather and climate operations and research.

Environment and Climate Change Canada is preparing to upgrade its supercomputer, and this always benefits forecasts via improved model resolution. Moreover, the amount of data handled in both NWP data assimilation systems and century-long climate simulations is staggering large, and it is not clear if affordable technologies can keep pace with scientific and societal demands.

Is there a consensus in the world concerning the prediction of weather and climate?
Uncertainties regarding the representations of clouds and their radiative properties have been flagged, for over 20 years, as the greatest source of uncertainty facing predictions of climatic change, and the weather that will accompany it.

Also, uncertainties pertaining to both greenhouse gas and particulate emission scenarios over the next century remain high.

This means that even if our models were perfect facsimiles of Earth, their practical value would be attenuated by the fact that we cannot accurately predict how to force them with radiative perturbations that stem from human activities.

But better prediction of severe weather, like hurricanes and tornadoes, has reduced losses of lives. Advanced warnings of snow events and episodes of poor air quality can save lives as well as reduce healthcare costs.

With climate models, their not-too-uplifting predictions, coupled with myriad observations from around the globe, have finally caught the attention, and hopes, of many Canadians; witness the politicians they have elected recently.

What else will will your lecture cover?
What I will attempt to convey is that both NWP and climate prediction require, and use, some of the most advanced technologies that humanity has to offer.

In order for these sciences to realize goals, which are set ever-higher by both their own communities and society at large, continued access to advancing technologies and highly educated people are essential.

Peter Herriman is a writer with The Fields Institute for Research in Mathematical Sciences.

(See the original of the photo used above at Flickr)