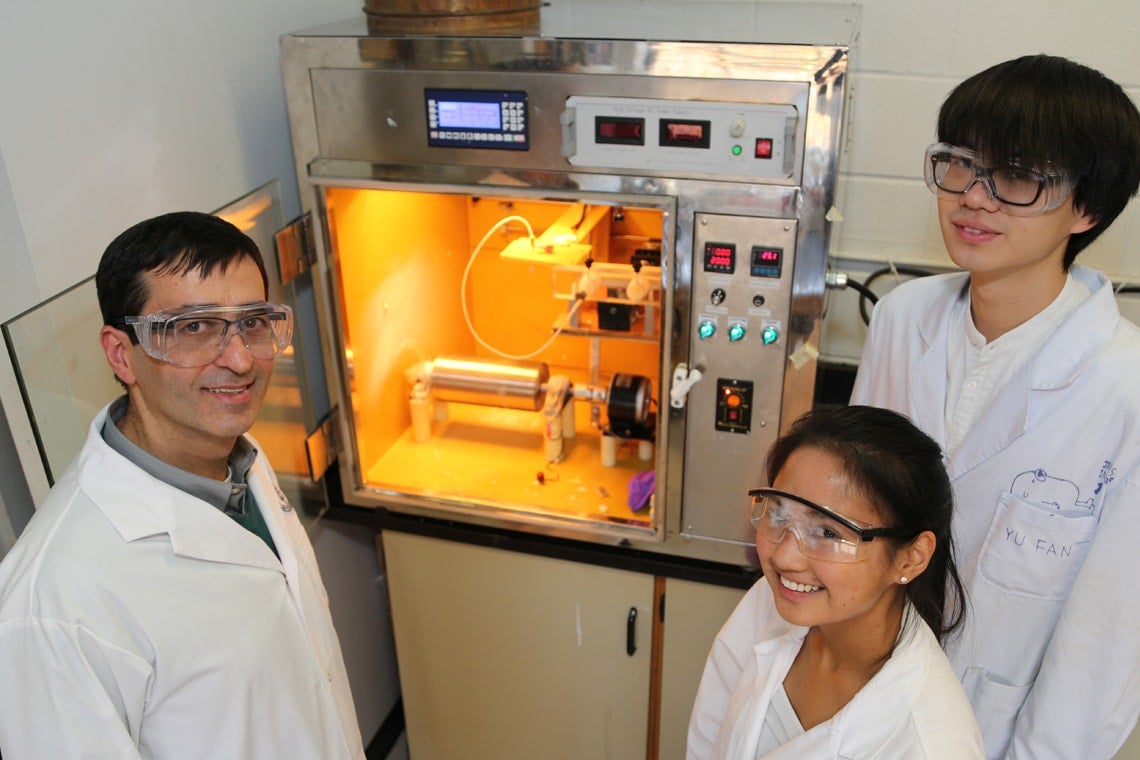 Every person on this planet needs clean water to survive. Yet the World Bank estimates that 1.6 billion people – that’s more than one in five – live in a region of “absolute water scarcity.” That number is expected to climb to 2.8 billion by 2025 due to climate change.

U of T's Chemical Engineering Professor Ramin Farnood has devoted much of his career to developing novel methods of treating both waste and drinking water to eliminate both microbial and chemical contaminants. Now, he’s applying that expertise to mitigating climate change.

The research connection between clean water and climate change mitigation is a new one, born out of the novel membrane technologies Farnood and his research group have developed over more than five years of work.

“We’ve recently begun looking at using these membranes to remove carbon dioxide from air,” says Farnood. “We’re also studying converting biomass – such as sewage and algae – to hydrogen and methane as an alternative source to fossil fuels for energy.”

His research group is developing dense, non-porous membranes that allow one gas molecule, such as CO2, to diffuse passively across the film, but prevent other gasses from doing so. If this membrane were built into the flue of a CO2-emitting plant or factory, like a chimney with an ultra-thin sheet down the middle, CO2 could be isolated from the plant’s emissions and captured.

It’s the first part of a holistic multi-stage carbon-capture-and-conversion process: other researchers in the department of chemical engineering & applied chemistry, including Professor Grant Allen, are working on using that captured CO2 as food for biomass, such as algae, that could then be turned into alternative fuels.

To advance this work and foster faculty and industry participation, Farnood is leading Carbon Control for Climate Change Mitigation, or C4M, an initiative supported by the Faculty of Applied Science & Engineering's Dean’s Strategic Fund.

“We launched this initiative to better address the emerging needs of industry – that’s the difference in our approach,” says Farnood. C4M will act as a catalyst in three key areas: the optimization of existing processes to minimize greenhouse gas emissions; inventing transformative technologies to replace existing equipment or processes, and the capture and conversion of greenhouse gasses.

“We want to reduce greenhouse gasses by optimization, innovation of totally new processes, and whatever we can’t reduce, capture and convert,” he says. “Those are the three pillars of C4M.”

C4M is one project of U of T engineering’s multidisciplinary Institute for Sustainable Energy, and Farnood also leverages strong industry ties through the Institute for Water Innovation (IWI), both of which will be housed in the new Centre for Engineering Innovation & Entrepreneurship, currently under construction. IWI and the Drinking Water Research Group recently hosted an intensive one-day research workshop in concert with industry partner Trojan Technologies, a leader in UV systems for drinking water and wastewater decontamination.

“I find myself being attracted by intriguing big questions,” says Farnood. “And not afraid of taking chances, starting something new.” There is no bigger research question than how humans will secure a future of clean water and sustainable energy.