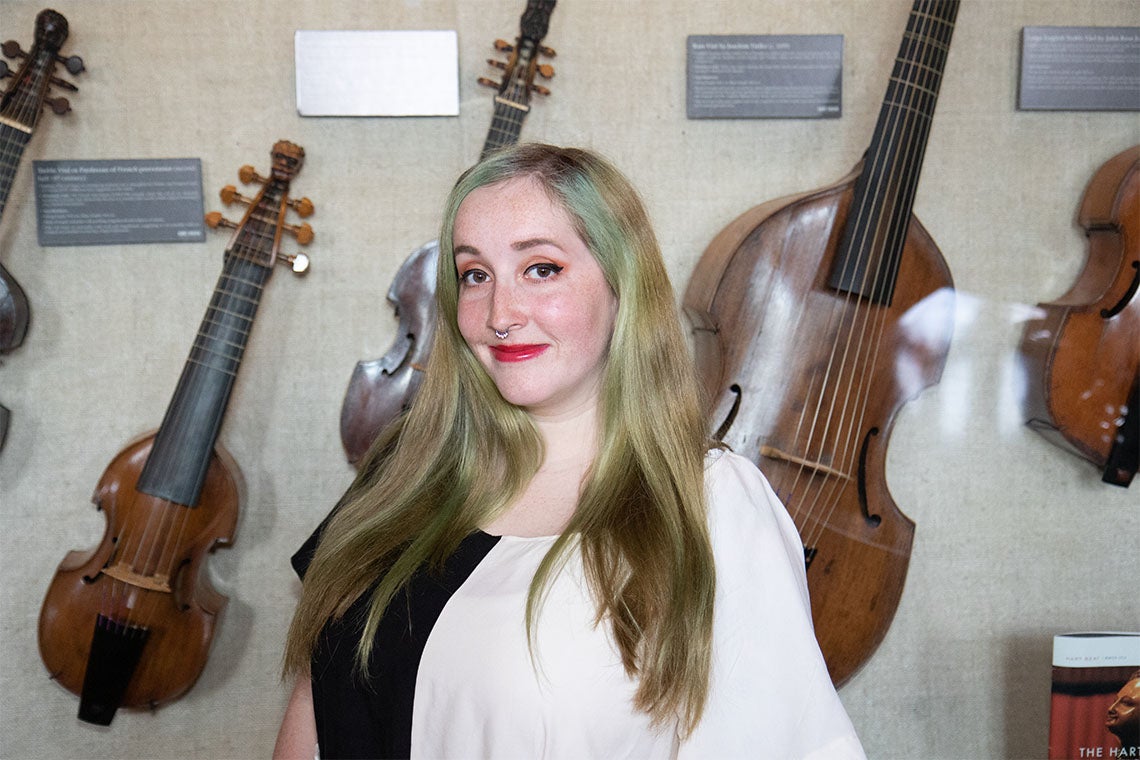 Bekah Simms, a doctoral candidate with the University of Toronto's Faculty of Music, has been nominated for her first Juno Award (photo by Perry King)

Bekah Simms’s musical life didn’t start by joining a band or getting piano lessons as a kid. Instead, the Mount Pearl, N.L. native obsessed over video game music – the melodies and the electronic pulses.

“I loved them – that’s what I went to bed to, humming,” recalls Simms, a PhD candidate in the University of Toronto’s Faculty of Music.

“I initially wanted to be a video game composer.”

But as video game music changed over the years, Simms became drawn to music and composition, folding a number of styles – and varying instrumentation – into classical structures.

It is that style and format that has garnered the classical composer and flutist her first Juno nomination for Classical Composition of the Year. Simms is being recognized for her composition for “Granitic,” a seven-minute musical journey from her debut album impurity chains.

The Juno Awards ceremony is Sunday in London, Ont. Among her fellow nominees is U of T alumnus Vincent Ho. (See a list of nominees from the Faculty of Music community below.)

Simms's interview takes place at Hart House, a place from which she says she draws a lot of inspiration,

Recorded with a small, 10-person collective, “Granitic” incorporates a number of instruments – percussion, electric guitar, live drums – and the tune has a number of twists and turns. The listener should take their own approach to listening to “Granitic” and anything on impurity chains, Simms says.

“They definitely should not be listening to it with anything in mind,” says Simms. “It’s my favourite thing when people listen to my music and come up to me and tell me this story that is so far removed from anything else that I would have experienced listening to the piece.”

She recalled two examples from friends of hers.

“One has said, ‘This is whales, being caught up in plastic in the ocean,’” she recalls. “Another person said ‘This is geological activity underneath the Earth’s crust – the slow crunching together and the suddenness of the volcano.”

Simms’s accolades are adding up. She has been the recipient of more than 20 awards and prizes, including the 2017 Toronto Emerging Composer Award and the 2018 Karen Kieser Prize in Canadian Music. In 2016, the CBC included her among their annual 30 hot classical musicians under 30.

Much of her inspiration for "Granitic" and the album came from simple curiosity. She began constructing her work from about five or six pieces – she found the works from U of T’s vast music library, which houses a collection of about 180,000 sound recordings.

“Then I looked at what that mystery translated to on the page,” she explained. “In composition, it’s common to have little borrowings and quotations embedded in your music,” what she calls “mystery points.”

“How can I do that? Maybe I can take part of one of them, part of the other and that could become a conglomerate of all these various influences.”

The song title itself implies something granular, she explains.

“The word granitic also implies a great firmness – a type of unfeeling power,” she added. “This piece was written with no programmatic or extramusical material, and I wanted to give it a title that wasn't associated with something in particular but rather the more abstract idea of heaviness in a detached sort of way.”

About her Juno nomination, Simms says she "was shocked, but also just super, super stoked, and super stoked to actually go. Even though the win may be unlikely, I get to meet the other nominees – who are composers I admire, who are not based in Toronto.”

Here is list of 2019 Juno Award nominees from U of T’s Faculty of Music community:

Jazz Album of the Year: Solo

Jazz Album of the Year: Group

Classical Album of the Year: Solo or Chamber

Classical Album of the Year: Vocal or Choral

Classical Composition of the Year

(List compiled by the Faculty of Music's Tyler Greenleaf)