Cities and countries aim to slash plastic waste within a decade 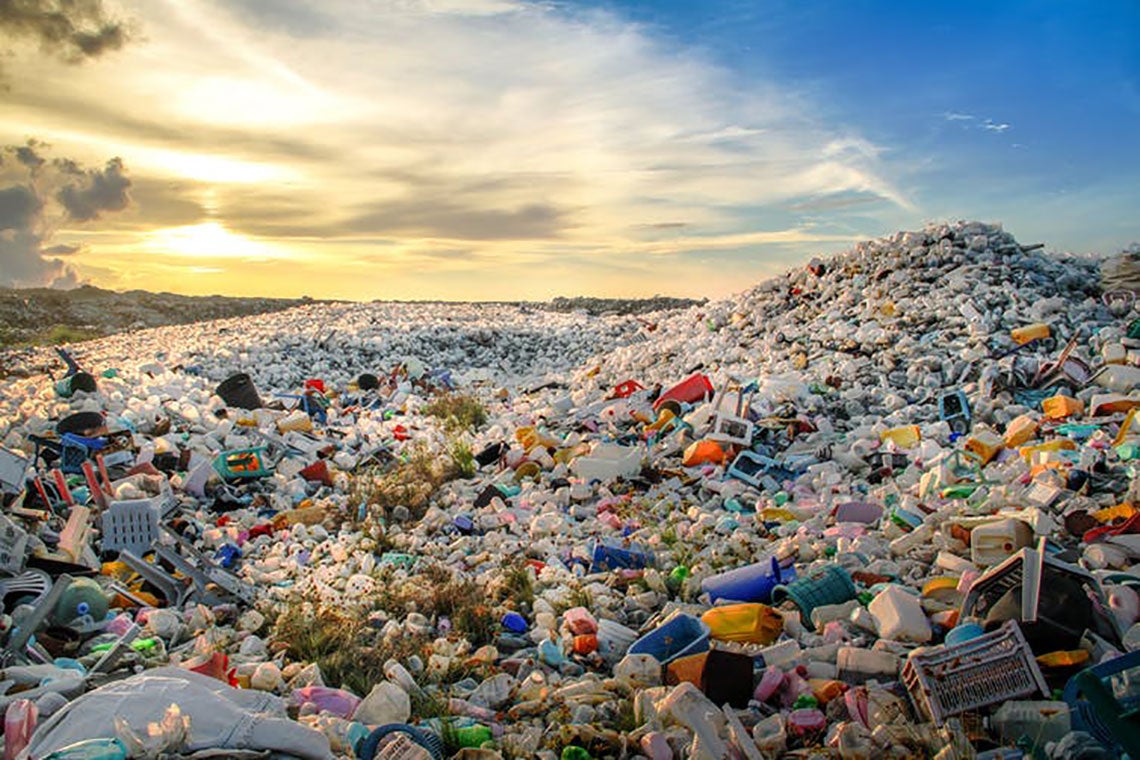 Plastics pile up at Thilafushi, an artificial island created as a landfill, in the Maldives (photo by Shutterstock)

Global and local community leaders from more than 170 countries have pledged to “significantly reduce” the amount of single-use plastic products by 2030. Success would result in significantly less plastic pollution entering our oceans, lakes and rivers.

Today, societies around the world have a love affair with disposable plastics. Just like some love stories, this one has an unhappy ending that results in plastic bags, straws and takeout containers strewn about the global environment.

As researchers who study the contamination and effects of plastic pollution on wildlife, it would be nice if by 2030 we no longer heard about plastics showing up in the stomachs of dead whales, littering the beaches of distant islands and contaminating tap water and seafood.

It is time for some good news about the environment, including stories about how cities and countries are managing plastics and other waste materials in more sustainable ways, and how children will have cleaner beaches to play on.

No reason to wait

Scientists have known about plastic pollution in our oceans for more than four decades. It is pervasive in rivers, lakes and soils, too. Plastic pollution knows no boundaries, with small bits of plastic found from the equator to the poles and even on the remote slopes of the French Pyrenees mountains.

Plastic waste damages ecosystems, smothers coral reefs and fills the bellies of sea life. In the absence of action, the amount of plastic waste produced globally is predicted to triple between 2015 and 2060, to between 155 and 265 million tonnes per year.

As a welcome response, global leaders have decided to act. At the UN Environment Assembly in Nairobi in March, environment ministers from around the world signed a voluntary commitment to make measurable reductions in single-use plastic products, including straws, shopping bags and other low-value plastic items that are sent to landfills after being used once.

Similar goals to deal with plastic pollution have been introduced by municipal, provincial, federal and regional governments across the globe. Non-profit organizations and industry leaders are making efforts to tackle the problem of plastic pollution. For example, Ocean Conservancy is uniting citizens and organizations around the world in cleanups to meet their goal of an ocean free of plastics by 2030, and Unilever has pledged to use 100 per cent recyclable packaging by 2025.

Canada introduced the Ocean Plastics Charter at the G7 summit in 2018, committing nations to work with industry to make all plastics reusable, recyclable or recoverable by 2030. That means sending no plastic waste to landfills.

Vancouver aims to be a zero-waste city by 2040. Although the city has reduced the mass of waste going to landfills by 23 per cent since 2008, it still has a long way to go.

Ontario also has its sights on being waste-free by developing a circular economy, which means keeping materials in use for as long as possible. The province aims to cut the amount of waste sent to landfills in half by 2030, a reduction of 4.5 million tonnes, through reuse and recycling.

To propel Ontario into action, Ian Arthur, the member of the Ontario provincial parliament for Kingston and the Islands, introduced a private member’s bill in March to eliminate Ontario’s use of non-recyclable single-use plastic products such as straws, coffee cups and plastic cutlery, which ultimately end up in landfills. These plastics do not feed into a circular economy.

In addition, school children in Ontario are working toward collecting 10,000 signatures on petitions to ban single-use plastics in the province.

Canadians would like to see more action against plastic waste. According to a recent poll, 90 per cent of Canadians were either very concerned or somewhat concerned about the environmental impact of plastic waste, and 82 per cent thought government should do more to reduce plastic waste.

Our research, and the research of others, has found that single-use plastic products litter our beaches and coastlines, small pieces of plastics contaminate our Great Lakes and the Arctic Ocean, and microplastics are present in our sport fish and drinking water.

Ambitious global, regional and local collaborations are sorely needed to truly realize these goals. It’s time to commit to ending the love affair with disposable plastics.

Individual action does work. Quench your need for caffeine by using a reusable mug. Hydrate with water from a durable and refillable bottle. Purchase groceries that come in containers that can be reused or recycled. Plan your kid’s birthday party and your work meetings without using disposable single-use plastics.

A decade of positive habits could lead to a future where plastic is no longer waste, but valued as a material that can be reused and recycled – shifting our current paradigm to a more sustainable one that lasts far beyond 2030.

Chelsea Rochman is an assistant professor of ecology and evolutionary biology at the University of Toronto.

Diane Orihel is an assistant professor in the School of Environmental Studies at Queen's University.